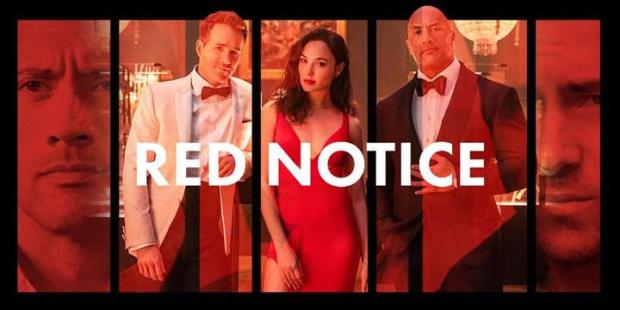 I wasn’t planning on reviewing this, but I felt somewhat compelled to after seeing it. This movie doesn’t even fall into the SO BAD IT’S GOOD category, it’s the kind that’s SO ludicrous you’re left just scratching your head why it ever got green-lit. I tweeted this right after I saw it…

Watching #RedNotice is like caving in to junk food… tolerable at first but could barely even finish it halfway thru.

Such a waste of $200mil, wow 🙄 pic.twitter.com/qreQtTrgoT

… Most of those $200 mil budget went to its stars… Dwayne Johnson, Ryan Reynolds, and Gal Gadot who according to IMDb trivia are getting $20 million each for their roles, likely even more for The Rock who is listed as one of the producers. As if that weren’t enough, there’s the flagrant product placements for Johnson’s and Reynolds’ own brands of liquor that each of their character drink in the film (Aviation American Gin and Teremana Tequila, respectively). The filmmakers are obviously going for a buddy-cop comedy style, but the silly banters goes from amusing to irritating in no time flat as they’re rehashing the same ol’ shtick that’s been done better in other movies. The whole prison scene is so absurd I wish I could erase it from my memory… heck, it makes the prison sequence in Paddington 2 seems far more credible. 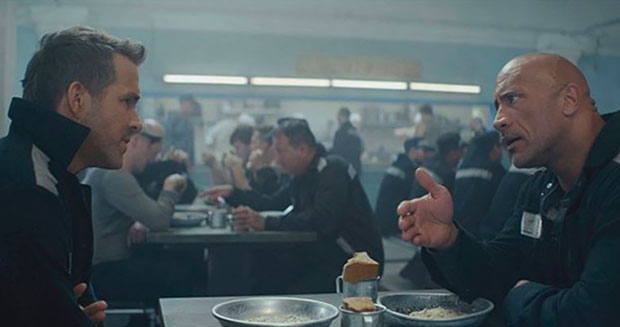 As for the plot, if you could even call it that… well, it’s a heist action adventure involving an Interpol agent and the world’s most wanted art thief. Who’s playing who? Well, the movie employs the ‘things are not what they seem’ twist which can be a fun mystery in a good movie, but here it ends up being so pathetic. Even the beautiful Italian locations, Rome and Sardinia, are practically wasted here… the only scene that got a strong reaction out of me was when Johnson smashed a Porsche Taycan in Rome… such a waste of fancy automobile, but then again, the entire movie is an exorbitant waste of talents and resources.

I guess one could judge a movie from the cast alone… which in this case if basically filled with attractive people with limited acting skills. I love Gal Gadot in the first Wonder Woman (sadly WW1984 was a disaster) but clearly she is not a dramatic actress. As the enigmatic character known only as The Bishop (it’s never explained why she’s called that), Gadot seems to be channeling Angelina Jolie’s Lara Croft in the Tomb Raider movies… down to her gloating smirk every time she outsmarts all the men in the movie. She basically resorts to just prancing around in a slinky dress here, there’s even a scene of her climbing up the ladder to yacht in a skimpy bathing suit as if she’s auditioning to be a Bond girl.

Now, Ryan Reynolds has certainly settled nicely into the comedy genre and he’s fun to watch in a well-written material (i.e. Deadpool, Free Guy) but not so much in lazily-written ones like Hitman’s Wife Bodyguard and this one. I think he is a naturally funny guy, as evident when he trolls himself (and his wife) on social media, but simply throwing silly quips and incessantly bantering with your co-star is NOT acting. I suppose he’s fully aware of it as I read him jokingly say that he and his co-stars are wasting Netflix’s millions on just goofing around on set… Heh, maybe it IS time for him to retire and just save us from these kinds of insipid drivels until he figures out just what real acting is.

As for Dwayne Johnson, well he’s pretty much playing a variation of himself in his movies. I’m fine with him as an action star, I mean he’s obviously built like one… but he doesn’t seem content with that as he seems to have this longing to be a romantic leading man as well 🙄 I grimaced during the lovey-dovey scene between him and Emily Blunt in Jungle Cruise as the romance just feels so forced, and he’s so cringe-worthy here as well in another eye-roll inducing kissing scene. Another tidbit on IMDb I found was that Tom Cruise, Nicolas Cage, and Keanu Reeves were considered for a part that I think Johnson ended up taking on. Well, kudos to them for saying no to a ghastly script despite the huge payday.

I have no idea who Rawson Marshall Thurber is (the only thing I’ve seen him do was We Are the Millers which isn’t great either), but really, he has no business writing screenplays as there is nothing remotely original nor creative about this movie. To add insult to injury, the action scenes are crappy and cheap-looking (even movies with a fraction of its budget looked far better!). The scene where Reynold’s character is supposed to arrive in Bali on a boat (clearly none of the crew ever set foot in my country during filming), the backdrop looks like something from a zoom virtual background photos! 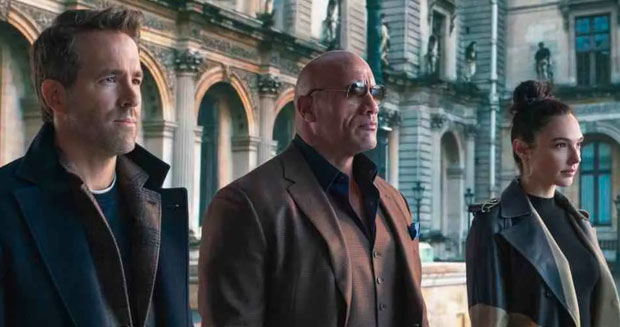 Now, I don’t expect every movie to be award-worthy, but even ‘brainless’ movies ought to still offer some kind of entertainment value, otherwise WHAT IS THE POINT?? There is really nothing to recommend this even if you are a fan of the three actors… I suggest just rewatch their more watchable movies instead. Oh and that cameo? I’m not gonna spoil it for you though you might already know from social media, but wow man, it’s got to be a stupendous career low to agree to do such a humiliating cameo. Tiresome contrivances abound from start to finish, going from cheesy, silly, preposterous in one not-so-quick succession all the way to its lame finish that shamelessly teases a sequel! Seriously Netflix, wouldn’t it be nice if you’d spend even half of that budget to fund good independent filmmakers instead?

I rarely give a rating this low, but Red Notice really is SO bad that it’s borderline irresponsible. Apparently it has the dubious distinction as being the most expensive Netflix movie to date, well it’s also the dumbest movie of the year (maybe even of the decade).

Did you see RED NOTICE? What did you think?