Paddington, now happily settled with the Brown family and a popular member of the local community, picks up a series of odd jobs to buy the perfect present for his Aunt Lucy’s 100th birthday, only for the gift to be stolen.

Though I enjoyed the first movie, it wasn’t as if I was clamoring for a sequel. But hey, not all sequels are inherently bad. I loved it so much that when I got home, my hubby and I actually re-watched the first Paddington. You know what, this sequel actually surpasses the original!

I love that writer/director Paul King gave the ever lovable bear an enchanting backstory and here we’re reminded once again where he came from (Peru) and how he got his genteel manner. “If you’re kind and polite the world will be right,” that’s his mantra, which is something everyone of us should live by. This movie has sooo much heart and the kind of British humor that really tickles my fancy. All the shenanigans he runs into in various jobs are hysterical, the barbershop and window-cleaning scenes had me in stitches. But the best scene is definitely in prison, and Brendan Gleeson is a riot as the fearful prison cook with a fun name, Knuckles McGinty.

But the real scene-stealer here is Hugh Grant who embraces his brilliant comic timing and puts it to good use. He plays Phoenix Buchanan (another fun name!), a has-been theatre actor who’s now relegated to doing dog food commercial. The various disguises are hilarious, hard to pick a favorite though the nun-scene is a particularly memorable one. It makes for some fun AND funny action scenes as Paddington has to retrieve the stolen gift for his aunt Lucy, as well as clear his name. 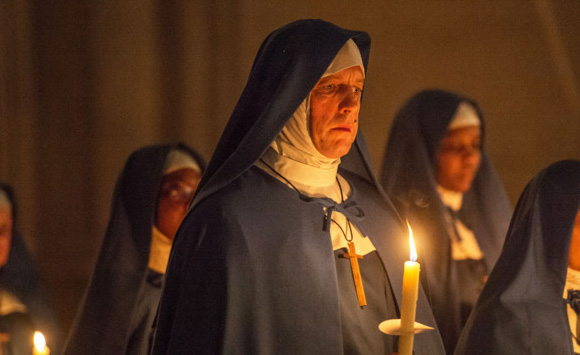 The Brown family (with Sally Hawkins and Hugh Bonneville reprising their roles as Paddington’s adoptive parents) are fun to watch as well. It’s amusing to see the incredible range of Hawkins’ acting ability in two extremely different performances (the other one is in The Shape of Water) in the span of a single week. I love how no scene is wasted in this movie, even the seemingly-throwaway scene of each family member’s new hobby has a purpose later in the movie. Julie Walters is always a hoot as Mrs. Bird, oh and one of my fave comedians Richard Ayoade also made a cameo!

In the end, the star of the show has always been Paddington himself, voiced brilliantly by Ben Whishaw with his wonderfully soothing voice. It’s a VERY British movie and so of course the Anglophile in me loved every moment. This jolly good fun ride is accompanied by a lively score by Dario Marianelli (whose Pride & Prejudice is my listening staple). A thoroughly joyful experience, this is one franchise I hope will keep on going.

*Yep this one gets a rare perfect score from me, I can’t find a single thing wrong w/ it!

Have you seen Paddington 2? Did you love it as much as I did?