HAPPY NEW YEAR … and welcome to a new decade!

(I think you can still say that until end of Jan right? 😀 )

Well, it’s time for the obligatory Top 10 Best list. I usually post mine a bit later in January, but this year, time ran away with me as next week is already February! But hey, I think it’s still fine to post one’s top 10 list before the Oscars anyway. 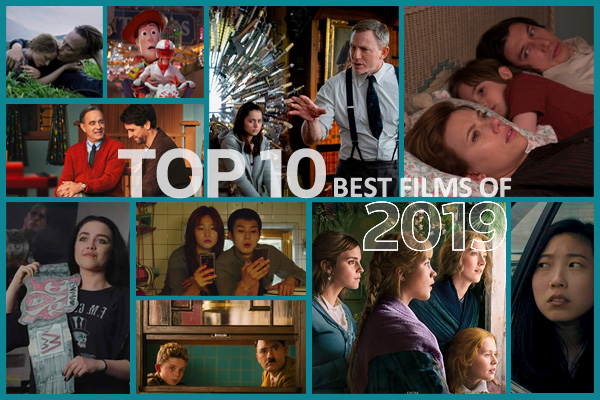 Since there are still plenty of 2019 movies I have not seen yet, I should preface this post with the fact that I haven’t seen The Lighthouse, The Two Popes, Dolemite Is My Name, Uncut Gems, Honey Boy, The Irishman, etc. which might alter my current Top 10.

It goes without saying of course, that it’s my list… my criteria is that a film makes a lasting impression on me, combining the virtue of being entertaining, deeply-moving, thought-provoking, and indelible. Replay-ability is a factor I take into consideration as well, though I don’t necessarily want to rewatch every single film on my list.

1. A Beautiful Day In The Neighborhood

I just remembered that the Mr. Rogers’ documentary Won’t You Be My Neighbor? was on my Top 10 of 2018. I didn’t even grow up watching his show, but I do know of his legendary kindness and iconic red cardigan. I love that Marielle Heller’s heart-rending film isn’t really about Fred Rogers himself, but more about his friendship between him and journalist Lloyd Vogel. Tom Hanks is an obvious choice to play Mr. Rogers given his also legendary ‘nice guy’ reputation, but Matthew Rhys and Chris Cooper are also exceptional in portraying a combative relationship between father and son. The film definitely captures the essence of Mr. Rogers and how kindness is always on trend.

I have to say that Terrence Malick is a hit and miss filmmaker for me, but I was immediately intrigued when I heard about Franz Jägerstätter, an Austrian conscientious objector who refuses to fight for the Nazis in WWII. It’s an undeniable s-l-o-w film but it doesn’t feel tedious or boring to me as the reflective style is absorbing, boasted by the performances of August Diehl as Franz and Valerie Pachner as his wife Fani. You truly feel for them as they struggle to stand by their Christian principles to oppose the Nazis, despite being clearly hated by the community and seen as traitors of sort. The stunning visuals are to be expected in a Malick’s film, but it never overshadows the narrative. Definitely an emotional experience and an inspiring one about what it means to courageously stand firm in one’s faith.

3. The Farewell (my review)

If you’ve read my review from last Spring, you’d already know how much I adore this film. I’m dismayed that the Oscars completely snubbed the film, director Lulu Wang and Awkwafina‘s performance, but hey it’s definitely NOT the end of the road for everyone involved. It’s such a compelling, specific-yet-universal story told in a brilliant way, funny and heartbreaking. As an SE-Asian woman living in the US, the story struck a chord with me and it made me think of my own family and the cultural clashes I sometimes face as an immigrant. The Farewell has a deceptively simple premise but one that packs a wallop, I sure hope Wang will continue to make films in the future!

4. Fighting With My Family

What a year for Florence Pugh! I didn’t even know who she was a year ago and this year she’s got not one but TWO films on my Top 10 list! I remember hearing from someone that this is a good movie, and despite not being a fan of wrestling at all, I decided to rent it. I’m SO glad I did. Pugh is absolutely mesmerizing as a small-town UK girl who dreamed of being a WWE superstar. But the supporting cast is wonderful as well, including Jack Lowden, Lena Heady and Nick Frost who made up her family. Thanks to a fantastic script and direction by the multi-talented Stephen Merchant, this is such a hidden gem that should’ve gotten more love. It also boast one of the most memorable performances from Dwayne ‘The Rock’ Johnson playing himself!

This is one of the three movies I saw at Twin Cities Film Fest that ended up in my Top 10 (the other two are Marriage Story and A Hidden Life). I had been a fan of Taika Waititi, as he’s got such a gift of mixing humor and pathos. He’s done it again this time with this rather controversial film, with the filmmaker portraying Adolf Hitler, no less! It’s always tricky to make a satire, especially involving the Holocaust. But Jojo Rabbit is a deceptively flippant film as it tackles a deeply emotional story and there’s SO much more than meets the eye. Taika’s gift in casting child actors makes brilliant use of Roman Griffin Davis as the lead, and Archie Yates as his hilarious BFF Yorki. I doubt it’ll win Best Picture, but it sure deserves its nomination.

I’m SO glad I got to see this before the end of the year in the theater! As it turns out, this film’s got legs as it’s still playing in some cinemas, more than two months after it’s released around Thanksgiving! Perhaps some people went to see it multiple times, and it’s easy to see why. Rian Johnson‘s delightful whodunnit has a brilliant script and a fun ensemble cast who seem to have a blast in their roles. Apparently Daniel Craig loved playing detective Benoit Blanc so much there’s rumor of a sequel with him reprising the character. It’s definitely a breakout role for Ana de Armas who proves that she’s quite a versatile performer.

I have to admit that when everyone was swooning over Ladybird, I was a bit skeptical. When I finally got around to it, I wasn’t really wowed by Greta Gerwig‘s writing nor direction. But her sophomore effort won me over, and her Best Picture and Best Adapted Screenplay Oscar nominations are well deserved. Once again starring Saoirse Ronan in the lead role, Gerwig did a beautiful job adapting Louisa May Alcott‘s classic novel. The non-linear narrative is a bold directing choice but somehow the film flows nicely and has an immersive quality. I love how each character has a proper arc with its own ups and downs. It’s an inspiring story for the ages and it’s infused with wonderfully memorable scenes that I know I’ll enjoy again and again.

I’m doing this list in alphabetical order, so it’s interesting that the next film on the list is written/directed by Gerwig’s life partner, Noah Baumbach. I’ve actually only seen one film he’s directed, While We’re Young, which I like but not love. But I can say with confidence that I LOVE Marriage Story. If someone were to ask me which 2019 movie that made the most impression on me, I’d say it’s this one. I tip my hat off to Baumbach for creating such a marvelous script that feels so natural and incredibly immersive. The story about the dissolution of a marriage is nothing new, but the genius is in the execution and the way the story is told. I felt like I was watching the characters Charlie and Nicole on screen instead of Adam Driver and Scarlett Johansson, which are a testament to their acting prowess. I sometimes think using letters to convey an emotion can be such cliché, but not only did Baumbach make it work beautifully, the scenes are pivotal to the story. Needless to say, I am rooting for this one to win Best Original Screenplay (I certainly hope it would NOT go to Tarantino!!)

Parasite made Oscar history with six nominations, the first Korean feature to compete at the Academy Awards! I think many fans of Korean cinema know the power of Korean films, and Bong  Joon  Ho is definitely one of its best filmmakers. The story about a destitute clan injecting themselves into a wealthy family is a shrewd blend of black comedy, social satire, and Hitchcockian thriller. It’s definitely one of the most indelible films I’ve seen in a while, not just last year. Greed, class system, and familial loyalty are all universal themes even when it’s told in a specific culture and time. The film is full of surprises and some even made me gasp out loud, I know some scenes would be tough to forget. Now, it’d be a total surprise to me if Parasite would go on to win the coveted Best Picture, but this masterful piece of cinema certainly deserves a place amongst the nominees.

I never thought I’d include this movie on this list as honestly, I thought Toy Story 3 was a perfect ending to a fantastic trilogy. I almost didn’t even want to see it, but I’m glad I decided to give it a go. Well, leave it to director Josh Cooley and the Pixar team to craft yet another heartwarming tale of adventure that’s not just a soulless cash grab. Woody, Buzz and the ‘ol toy gang are back together again… who doesn’t love a good reunion story? But they run into new toys such as Forky and Duke Caboom who enliven their adventure and prove to us once again that this is truly the best animated franchise ever. For a movie about toys, Toy Story 4 (and its predecessors) carries such an emotional poignancy and deep humanity for anyone of all ages.

Some of the movies here I like very, very much and I have actually enjoyed more than the ones on my main top 10. Some I appreciate but I don’t really feel like watching it again.