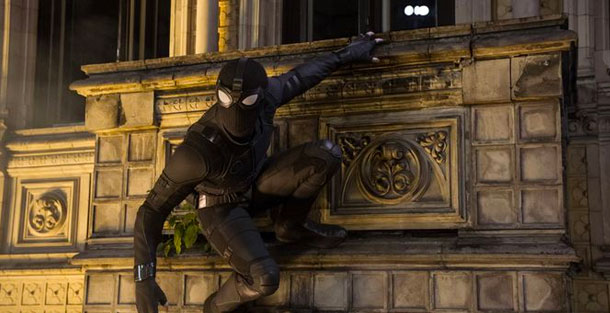 Can’t believe it’s been seven years ago that I reviewed the Andrew Garfield‘s The Amazing Spider-man, which I barely even remember now so clearly it wasn’t all that amazing. I think I was mostly sentimental as I was at Comic-Con Hall H when Garfield first revealed that he was playing the role (those with eagle eyes might notice me hyperventilating just inches away behind him 😉 ) but since Tom Holland took over the role in Spider-Man: Homecoming in 2017, he’s now become my favorite Spider-man. He’s a proper kid after all, while Garfield was a decade older when he was cast to play a teenager.

I’m treading as carefully as I can with this review as not to tread into spoiler territory. It is safe to say that the film takes place after the events of Avengers: Endgame, which if you still haven’t seen it by now, well this entire movie IS a huge spoiler. While Endgame has fixed Thanos’ snap in which he wiped off half the universe, those who had been gone for five years now co-exist with those who remained, the effect coined as ‘the Blip.’ The opening sequence addresses that in hilarious way (using a famous 90s power ballad) as Peter is reunited with his BFF Ned (Jacob Batalon) and they’re preparing on a school trip to Europe. 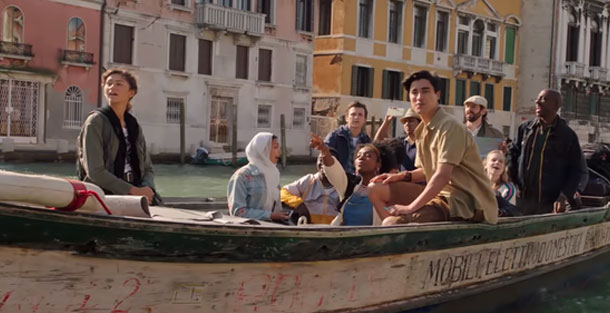 The heroic ending of Tony Stark weighed heavily on everyone, most of all Peter Parker who still misses his former mentor/father figure. Not only that, he also carries the burden of people’s expectations that he’d become the next Iron Man, which honestly, is too much for any capable man, let alone a 16-year-old boy! Yes he’s an Avenger, and at such a tender age, he’s had more than his fair share of battles. ‘Please! You’ve been to space!’ as Nick Fury (Samuel L. Jackson) argued, but the most important thing in Peter’s world at the moment is to declare his love to his school crush. I appreciate that this movie allows Peter be a regular boy, dealing with the angst of teen angst like any other, while juggling the huge expectations of  living up to the ‘with great power comes great responsibility’ mantra.

Just like its titular hero, director Jon Watts also has a huge responsibility on his shoulder the fact that Far From Home is the last movie of Phase Three of the MCU (Marvel Cinematic Universe) while no new movie has been officially announced for Phase Four yet. I think Marvel boss Kevin Feige said Endgame and Far From Home is ‘essentially two pieces of the same story’ which has to be quite challenging to do when you’ve got two different set of directors for each film. Yet Watts managed to pull it off marvelously, keeping the tone of this movie lighthearted, humorous and fun but not without its poignant emotional moments. The fact that he has worked with Holland in Spider-man: Homecoming, they surely have a good rapport. The returning cast such as Batalon and Zendaya as MJ have a bit more to do here as well. I have to say some of my fave scenes involve Peter and MJ, who refreshingly is much more than a damsel in distress.

Jake Gyllenhaal in his MCU debut as Mysterio couldn’t be more perfectly-cast. The less said about his character the better but I could say that he and Holland have a good chemistry together. I also like that the plot deals with the themes of trust, as any good superhero would have to quickly learn, similar to the themes in Captain America: Winter Soldier in many ways. I also love that the movie deconstructed the whole superhero myth as one character said something about how people only listen to you if you wear a cape.

Clocking in at 2 hours 9 minutes, the movie didn’t have many slow moments. The action sequences are terrific. All the perilous scenarios really puts Spidey’s power to the test. The fact that Peter now has access to Stark’s state-of-the-art technology is both a blessing and a curse, which you’ll find out why when you see the movie. I still do have issues with some of the more bombastic action sequences (just way too many explosions!) but the clever plot makes it bearable. Plus I love the European locations… Venice, Vienna, Prague… oh my! There’s also a hilarious bit of Peter in the Netherlands! It certainly helps when the script is as nimble and spry as the protagonist. Screenwriters Chris McKenna and Erik Sommers turned the whole ‘saving the world from an Avengers-level threat’ upside down where nothing is what it seems. Now, my favorite Spider-man movie up until now was Sam Raimi’s Spider-Man 2 with Doc Ock as a fantastic adversary, but I think this one now stands as my new favorite Spidey movie.

Tom Holland is the true star here who absolutely rocks as both Spider-man AND his alter ego Peter Parker. He’s got the nimble physicality that makes him credible as a web slinger, but what I love most is how he wears his heart on his sleeve. He’s not afraid to show his feelings, be it his deep admiration for Tony Stark or his love for MJ. I have to admit that whole ‘Peter Tingle’ phrase (thanks Aunt May!) in reference to his Spider-sense is silly and cringe-inducing, but it’s a cute scene the first time it’s introduced. Marisa Tomei is wonderful as Aunt May and nice to see Jon Favreau back as Happy who now gets to look after Iron Man’s young protégé. I already mentioned about Zendaya above but I’ll say it again, I adore her MJ and I hope she gets to do more in the future Spider-man movies!

Lastly, while I can’t talk about the ending of this movie, one thing I can say is that it’s unpredictable. That is always quite a feat for any movie, let alone one of this magnitude where there’ve been so many versions in the franchise. Oh and DO stay for the end credits scenes! Believe the hype, they’re both great and the first part actually makes you wonder just what it all means for Peter Parker in MCU Phase Four. Man, we don’t even know when the next Marvel movie comes out but I’m already looking forward to it. Bring. It. On!

What are YOUR thoughts about Spider-man: Far From Home?