Is this film necessary? It’s an inescapable question that plagues this reboot from the start, as it’s only a decade ago the first Spider-man film came to the big screen. When the reboot was announced a couple of years ago, the last film of the Sam Raimi Spidey trilogy was only three years old! Yet I was immediately sold on this movie at Comic-con’s SONY panel, almost exactly a year ago today, when Andrew Garfield suddenly showed up wearing a cheap Spiderman costume, professing his love to his beloved character mere inches away from where my hubby and I were sitting [you can see me screaming behind me in some of the videos, ehm]

In any case, though the question I posted above is a valid one, I feel that once I enter the theater to see THIS particular film, I should judge it on its own merit.

So on that note, did Marc Webb and his team of writers delivered?

The relentless marketing promised us the *untold story* of our web slinger, so naturally it started with Peter Parker as a young boy, playing hide and seek with his scientist dad. But the mood quickly turns from playful to suspense as young Peter discovers his father’s study has been broken into. Richard Parker quickly gathers his documents and whisk his son away to Aunt May and Uncle Ben’s residence to leave him at their care.

Fast forward over a decade later, his parents have long been reported dead in a plane crash, Peter is now in high school and being a smart, geeky kid, naturally he’s an outcast whose only friend is his skateboard. The journey from regular guy to superhero treads familiar grounds. Peter discovers dad’s mysterious papers which leads him to Oscorp to find his dad’s colleague, the one-armed Dr. Curt Connors. Disguised as one of the high school interns [which happens to be where Gwen works at], he sneaks into a lab where a ‘biocable’ is constructed from genetically modified spiders. Of course one of them ends up biting him, and the rest is history. That life-changing moment inevitably brings all kinds of complications to the boy. As if maneuvering through his first romance isn’t tricky enough, an incident at school has the domino effect that cost the lives of his beloved uncle. 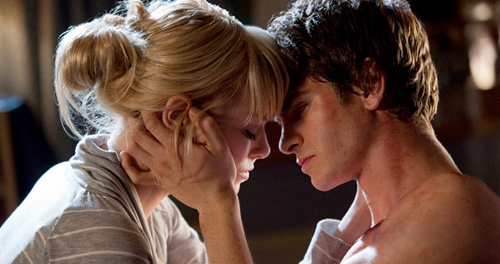 The casting of Garfield and Emma Stone as Gwen Stacy is a clear winner right from the start. Despite being about 10 years older than the character, the 28-year-old Garfield is effortlessly believable, he imbues the role with a certain teenage angst and an appropriate dose of recklessness. Unlike the previous installments where Peter was shown as being a complete loser, in this one he’s far less pitiable. In fact, when the school bully Flash was tormenting another boy, Peter actually stands up to him, which then catches the eye of the beautiful Gwen Stacy. I also like the fact that this film particularly shows him as a science genius. Akin to Tony Stark, there’s a bunch of scenes of him tinkering with his dad’s formula and crafting a mechanical web shooter instead of an organic one.

There’s quite a lot of amusing scenes as Peter’s spider-like ability manifests itself almost immediately. Garfield’s wide-eyed mannerism and comic timing is put to good use here, particularly on the subway ride home and the morning after scene where he practically destroys his bathroom in a matter of seconds! His new-found powers discombobulate as well as delight Peter, and we see a great deal of scenes of Peter gleefully testing his gravity-defying abilities before he becomes the titular hero. As Spidey, Garfield also brings more of that sarcastic playfulness that’s fun to watch.

Thanks to their palpable chemistry and Marc Webb’s gift for creating an authentic relationship drama (as he did in 500 Days of Summer), the romance between Peter and Gwen feels genuinely affecting and real, it even makes you forget for a bit that you’re watching a Summer superhero blockbuster. Emma also has this likable presence and warmth about her, plus she is no damsel in distress, so it’s nice to see far less shrieking women that’s so prevalent in Raimi’s versions.

Rhys Ifans brings a surprising credibility in the role of the villain, I’ve only seen him in comedic roles like his scene-stealing role in Notting Hill but he’s quite a versatile actor. I always like a story where the villain has a close ties with the hero, and has a personal motivation that drives him instead of just an arbitrary desire for creating chaos. Connors is more of a tragic character because he’s naturally a good guy, and his humanistic identity doesn’t become lost beneath the freaky Lizard shape once he’s transformed.

What’s nice about this movie is the compelling humanity of our superhero, it’s as much a movie about Peter Parker the human as it is about the hero in spandex. Yet it also offers the cool visuals that we’ve come to expect from a superhero movie. The technical wizardry of Spidey’s web-slinging stunts is marvelously-crafted, and there’s plenty of beautiful aerial shots of the Big Apple at night that I think makes the 3D price worthwhile. The ‘cranes’ scene packs an emotional punch in the bombastic climactic battle between Spidey and the Lizard. That sense of ‘community’ evokes memories of the awesome train scene in Spider-man 2.

Now, what drags this movie down to me is the pacing. At 2 hours and 16 minutes, the film does feel quite tedious at times, especially in the first half as the scenes of Peter discovering what he’s capable of feels repetitive. The editing could’ve been a whole lot tighter, especially considering that supposed “untold story” of what really happened to Peter’s parents is not being explored that well. The famous line “with great powers comes great responsibility” is also missing from the film, and the writers tries to replace it with something similar but it just doesn’t have as big of an impact.

I think that’s my general sentiment about the supporting characters, they’re just not memorable. Aside from the two main leads, everyone else’s performances are just serviceable to me with nothing worth writing home about. For one, the relationship between Peter and his aunt/uncle (Martin Sheen and Sally Field) aren’t as touching, they’re good mind you, but I just don’t feel a real connection between them and Peter. Then there’s the stereotypical, cheesy school jock Flash, whose transformation from bully to buddy is entirely unconvincing. Even Dennis Leary as Gwen’s dad feels one-dimensional even though there are some memorable scenes between him and Peter.

Another major disappointment is the score by James Horner. I’m actually surprised he’s the composer as the music is so forgettable, it adds nothing to the experience at all.

Overall it’s an entertaining reboot and despite it being inherently predictable, Webb manages to ingest something fresh to the table, starting with the main cast. However, the main beef I have with the movie lies in the significant gap between what’s promised n what’s being delivered. What “untold story??” The only thing that was not told in the Raimi’s versions is that bit about his father and his “decay rate algorithm” that Dr. Connors has been searching for. But apart from that, it’s the same old story just told slightly differently.

Given that there are quite a lot of missing scenes from the trailers [whatever happens to Rajit Ratha who keeps pressuring Connor to hurry up on human trials of his experiment??], perhaps it’s a last minute decision on the studio’s part to save that “untold story’ for the sequels. Fortunately for SONY, Webb has spun [pardon the pun] something that has enough going for it to make me want to stick around and find out what happens next.

So what do you think of this movie, folks? What do you like/dislike about it?