I thought as we start the new week, I’m doing something different. Yesterday I was guest podcasting at St Paul Filmcast, an awesome & prolific Twin Cities-based entertainment podcast that talks about movies and interviews various filmmakers. I’m privileged that podcaster/graphic novelist Nick Palodichuk invited me to talk about some of my favorite movies we saw in 2019.

Take a listen by clicking the logo below:

At the beginning of each episode, there’s a spot for dedication… I’m dedicating this podcast episode to all my wonderful BLOG CONTRIBUTORS: Laura S., Holly P., Ted S., Vitali G., Vince C. and most recently Andy S. Thank you guys!!

I’ll be seeing Tarantino’s ONCE UPON A TIME IN HOLLYWOOD on Wednesday, so look for my review by this weekend!

Before the episode ended I also got to talk about the recent exciting news that BOND 25 will be introducing a female 007! 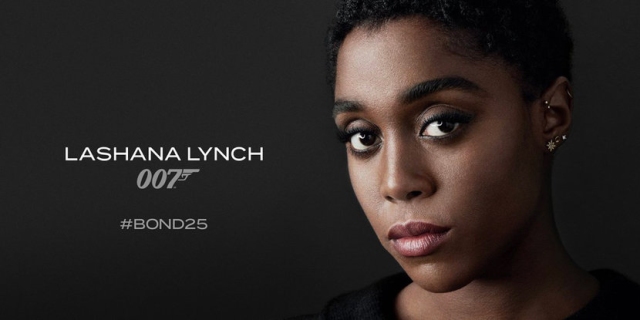 I had already talked about some of the things revealed in Bond 25 reveal last April where they introduced Lashana Lynch as one of the new cast members, along with Ana de Armas and Rami Malek. Well, now we know just who she’ll be playing!

In case you haven’t heard, per Esquire UK…

“The 25th film opens with Bond (Daniel Craig), retired in Jamaica, being called back to action to fight a new villain. There is a pivotal scene at the start of the film where M says, ‘Come in 007,’ and in walks Lashana who is black, beautiful and a woman. It’s a popcorn-dropping moment. Bond is still Bond but he’s been replaced as 007.”

Now, it’s entirely possible that the fact that Phoebe Waller-Bridge is one of the Bond 25 screenwriters has something to do with this. After all, she is the creator of the hit series Killing Eve where Sandra Oh who’s a woman of Korean descent plays an MI5 agent. Now, to those who are up in arms over this [puh-leeze], 007 is just a spy code name. Yes, there is only going to be one James Bond (and will likely always be portrayed by a white male), but anyone could be assigned to be a 007. I really think this is a step in the right direction for the 57-year-old franchise, while still maintaining status quo.

Now, as for the casting of Lashana Lynch, I’m glad they went with a British-Jamaican actress, as is Naomie Harris who plays Moneypenny. It totally make sense the fact that some parts of the film takes place in Jamaica, a key location for the Bond franchise as the place the franchise was created by Ian Fleming. So they’re going back to their roots, so to speak. Despite all the behind-the-scenes and on-set dramas surround this movie, I’m now even more excited to see what director Cary Joji Fukunaga would do with Bond 25!

So tell me what’s your favorite movie(s) you’ve seen so far? And what do YOU think of the female 007 news?