1. I’ve been excited about Christopher Nolan’s DUNKIRK for some time and the teaser couldn’t have arrived at a better time… that is as I’m prepping my FFTF post 🙂

I think most of you already knows what this is about. Now, I’m not always into war movies, mostly because it tends to be way too violent. But man, this looks so darn epic and with Nolan at the helm filming this on 70mm, I’m SO THERE!

The cast is pretty amazing, some of which have been in Nolan’s previous movies… Tom Hardy, Cillian Murphy, Mark Rylance, Kenneth Branagh… AND my new Welsh crush Aneurin Barnard!! One thing I wish Nolan hadn’t done is hire that kid from One Direction as I guarantee there’s gonna be a bunch of teenybopers swarming this just to get a glimpse of him. I mean I can’t even google this movie without seeing his face! In any case, we still have a year to wait for this as Dunkirk isn’t released until July 2017! 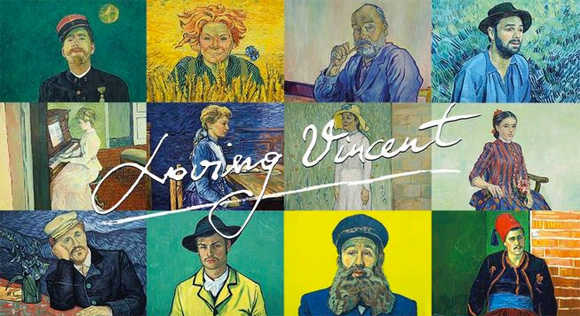 Now, this one apparently has been released for some time but I had just seen it for the first time thanks to my daily lunch-hour reading of BBC news, I found it in the culture section. It’s the world’s first feature-length painted animation!

Per its official site, Loving Vincent features over one hundred and twenty of Vincent Van Gogh’s greatest paintings. The plot, drawn from the 800 letters written by the painter himself, lead us to the significant people and events in the time leading up to his unexpected death. Every frame in the Loving Vincent movie is an oil painting on canvas, using the very same technique in which Vincent himself painted. Check out the amazing trailer, I sure hope it’ll get a decent release worldwide.

Thoughts on either one of these projects?

….
2. This week we also got a first look at romance war drama ALLIED. I didn’t even know is in the works but hey, anything with miss Cottilard gets my attention!

The synopsis per IMDb:

Allied takes place in 1942. Max Vatan (Brad Pitt) and Marianne Beausejour (Marion Cotillard) are undercover allies who begin to fall for each other. Max is a British intelligence officer sent to Casablanca to plan an assassination attempt. He works with Marianne, a French Resistance fighter who goes undercover as his wife.

I kind of like the pairing of Cotillard and Pitt, and Pitt actually looks decent without all the weird facial hair he’s been supporting for a while. This film seems so under the radar despite the cast though, I mean I haven’t heard a peep and no trailer yet even though the release date is November of this year.

The rest of the cast include Matthew Goode (yay!), Lizzy Caplan, and Jared Harris. The director is Robert Zemeckis whose last two features, Flight and The Walk, I haven’t seen yet.

Are you excited for this one?
…

3. Speaking of trailers… ahhh what we’d do for our movie crushes [sigh] I followed this twitter account for trailer updates and it says there’s supposed to be a trailer for Ben Wheatley’s FREE FIRE attached to Star Trek Beyond. So naturally I was super excited and while initially I was fine waiting a week or two to see it, I immediately booked Friday night showing. As you know, my dahling Sam Riley is in Free Fire, though he’s probably only gonna be in the trailer for all but 5 seconds. But no matter, that’s enough to persuade me to actually see a movie on the big screen. Alas, the trailer was NOT shown at STB 😦 There were more than a half dozen trailers in front of it but none of it was Free Fire! Suffice to say I’m no longer following that trailer account. Heh, I wish I lived in London!!!

I’m curious, have you ever been compelled to see a movie on the big screen because a certain trailer is attached to it?
….

4. Ok this question is inspired by this weekend’s release of Suicide Squad. I’ll be writing the review this weekend but for now I can say that I enjoyed it, definitely not as bad as what the critics made it out to be.

It’s no surprise DC fans are up in arms about the negative reviews. Heh, every day there’s always news about people getting angry about the most trivial things. This time the subject of DC fans’ wrath is the Rotten Tomatoes site:

The #SuicideSquad petition to take down Rotten Tomatoes has over 16,000 signatures https://t.co/LgBo3OCcBk

Actually, last time I checked the petition‘s got 18,495 supporters. The guy who started the Change.org petition wrote: “We need this site to be shut down because critics always give The DC Extended Universe movies unjust, bad reviews. And that affects people’s opinion even if it’s a really great movie,”

Now, I don’t really trust these critics aggregator sites anyway, because their algorithm is just baffling to me. Sometimes I’d click a rotten review that actually gives a movie 3/5, now I wouldn’t exactly categorize that as rotten. I’d think 3/5 is average and even 2.5/5 is below average, so not exactly in the horrible category. But to think that they’re biased against a certain film company is just absurd. Ok so I was left scratching my head that Age of Ultron got 75% fresh rating. I think that bloated movie is a big fat meh, not to mention the cringe-inducing Hulk/Black Widow *romance.* But I think it was still better than Batman V Superman, which got 27%, the exact RT score of Suicide Squad right now. If that’s the final score I think people are gonna think it’s a giant conspiracy, ahah.

What do you think about this supposed Marvel vs. DC *bias* and/or your thoughts about film critics site in general?
…

5. This month Five for the Fifth’s guest is Ian from Ian the Cool Blog! He actually left a comment on my review of The Secret Life of Pets and it’s a great question that I asked him if it’s ok that I included it here. Here it is in his own words:

You confirm a lot of what I’m hearing, that [the movie] is really unoriginal and we’ve seen it all before. I guess the question is, does that matter for a kids movie? Kids won’t know its being unoriginal, because they don’t have the same film background we do. They will care about having funny characters they care about. Then again, should family movies have the bar set lower? When there are movies like Inside Out raising that bar, is the family argument an excuse anymore?

Well, what do you think? Should kids movies have the bar set lower compared to movies for adults?

Well, that’s it for the AUGUST edition of Five for the Fifth, folks. Take part by picking a question out of the five above or better yet, do ‘em all!