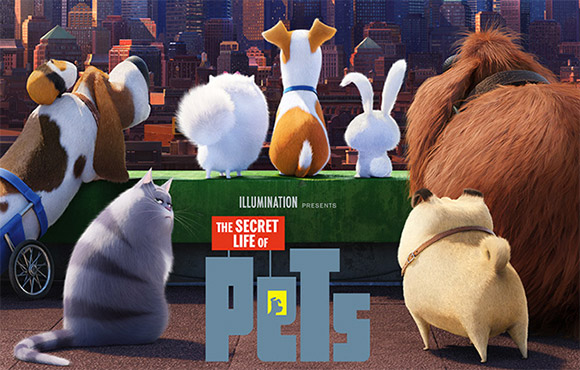 The moment I saw the trailer for this months ago I was immediately sold. Anyone who’s ever owned a pet would likely be drawn to this as well, and given the popularity of cat (and dog) videos on social media, this is no doubt a winning concept for an animated movie. The movie started off well enough on the premise of pets shenanigans whilst the owner is away, seen from the life of the movie’s protagonist, a terrier dog named Max (Louis C.K.). The opening scene, set to Taylor Swift’s Welcome to New York, with Max propped on a bike as his owner Katie strolls through Central Park with the city’s metropolitan backdrop is fun and vibrant. Life seems perfect for Max, that is until Katie arrives one day with a huge, hairy dog from the pound. Max takes an instant dislike to Duke (Eric Stonestreet), and it’s easy to see why.

At first the story seems to revolve around the households of Max as well as his NYC neighbors. There’s the obese gray cat Chloe (Lake Bell), bulldog Mel (Bobby Moynihan), dachshund Buddy (Hannibal Buress), parakeet Sweet Pea (Tara Strong) and a white Pomeranian Gidget (Jenny Slate) who has a crush on Max. I enjoy the intro to each of these fun characters, some of which has been revealed in the trailer. I still laughed when we see Chloe resisting temptation of eating all the food on the fridge and fail miserably, and when Buddy enjoying a delightful massage courtesy of an electric mixer. But the plot then takes us into more of a riotous adventure involving pets being taken in by Animal Control, and ends up being kind of a rescue and ‘great escape’ type of plot that is neither inventive or original. I feel like I’ve seen this type of plot before in other animal movies, most recently Shaun the Sheep.

…
The whole bit in the sewer with an anti-human gang Flushed Pets, led by a militant white bunny Snowball (the petite firecracker Kevin Hart) has some hilarious moments, but it feels too mean-spirited for a kids movie. Unlike the far superior talking-animal animated feature Zootopia, there’s not much emotional resonance nor depth in The Secret Life of Pets, which is a bummer as I think the concept has so much potential. The moment Duke finds out about what happens to his owner provides one of the very few emotional moments in the movie, but for the most part we get one slapstick gag after another. It also includes a rather silly musical number involving dancing sausages that seems rather pointless.

The movie is directed by Chris Renaud & Yarrow Chenney who have worked on previous Illumination animated movies in the past. I quite like the score too, which I realize from the credits is by Oscar winner Alexandre Desplat. The funniest bits to me are in the simpler moments. There’s one when Max is trying to channel his inner wolf instinct but then concludes that perhaps the ‘myth’ comes from a dog mistaking its parent saying ‘woof’ with ‘wolf.’ You have to watch it to get the full impact of the joke. I also find the aloof & sarcastic Chloe hilarious, she’s what you’d imagine a cat would be and the moment she gets her head in a tube is absolutely hysterical. I wish there were more moments like this, that is the simple shenanigans these pets get into in a normal day, instead of the grandiose escape-from-peril plan that is too busy for its own good. The simple day-to-day stuff is more of what I expect from a movie titled ‘the secret life of pets.’

That said, I think the fun personality of the pets, thanks to a talented ensemble of voice cast, makes this movie enjoyable despite the flaws. Louis C.K. is perfect as Max, a good ol’ loyal dog who’s self-deprecating and cynical. The standout for me is Lake Bell‘s Chloe, Albert Brooks‘ hawk Tiberius and of course Hart’s hysterically-psychotic white bunny. I find the massively popular comedian hilarious in real life, his high-pitched voice, ultra-confident persona and antics are a hoot. But I can see how he might irritate some people, as comedy is so subjective. Jenny Slate‘s raspy voice as Gidget is funny too, though her Pomeranian’s character transformation is just downright preposterous. I get it that we can’t complain about things being nonsensical about a cartoon of talking animals, but I feel that the plot could’ve been much more engaging. Comparing this to other works by Illumination Entertainment, this is more akin to Minions than Despicable Me in terms of substance. There are touches of Toy Story as well, though it obviously doesn’t hold a candle to the Pixar masterpiece trilogy.

If you’re on the fence though, I think this is still well worth a watch. I don’t think it’s worth the 3D price however and I think it’d be ok to just wait for rental. I saw one reviewer say this is more humor than heart and I guess that is perfectly adequate for a kids movie. As an adult though, I kind of expect more given what Pixar, Disney and even Dreamworks have delivered lately.

What do you think of ‘The Secret Life of Pets’?