Happy Monday everyone! Hope you had a great weekend. Spring has finally sprung here in the Upper Midwest… it actually felt nice enough I could forgo my jacket for part of the day Friday! Speaking of Friday, it was also one of the busiest day I’ve ever had… which I’ve shared on my FB below…

Well, it shouldn’t be surprising to most of you that my hours, days and weeks have been consumed by my short film project. I did see three films this past weekend however… including a rewatch of Captain America Civil War as it’s now on Netflix!

I rented SING earlier in the week and really enjoyed it! I really loved the trailer, but fortunately it lived up to it (unlike The Secret Life of Pets). So many fun characters, especially the Rosita the pig (and her brood of kids!) and Johnny the gorilla. The cover songs were great too and I thought the story was pretty moving and engaging throughout, and the ending managed to surprise me in a lovely way. I highly recommend it if you enjoy animated films that’s much more than just a visual treat.

I also finally saw Beauty & The Beast! Boy I had been SO excited about it for like a year but when it’s finally here three weeks ago I was so swamped I could barely got excited for any movie. But I needed a break after such a hectic and quite stressful week, and this movie did just the trick!

Now I will say that it still doesn’t beat the Disney animated classic, but I already knew that before I even saw it. With that in mind, I still found it to be pretty entertaining. I think Emma Watson did well as Belle, which is key in me liking the movie. I especially love the relationship between Belle and her dad, played by the venerable Kevin Kline.

Oh and the song… the songs!! Alan Menken is a musical genius who’ve made a bunch of my all time fave Disney songs, here he teamed up with Howard Ashman and added some new favorites!

I’ll do a music break of the movie at some point, but man, the three new songs How Does a Moment Last Forever (Montmartre), Days in the Sun and Evermore are absolutely lovely!! I initially cringed when I heard the Beast singing, but the emotional song literally made me sob. Yes I’m such a sap 😛

Ok so it’s just 15 days until my filming!

Things are changing rapidly every single day. The short script is officially ‘done’ and sent to my actors, though of course it’s not really final until filming wraps. After losing a director nearly month before filming, we’ve now pretty much got a full crew!

I knew indie filmmaking is fast and furious but it seems our pre-prod process is at lightning speed even by that standard! I gotta say though it’s been a ton of fun even with the stress… I’ve been running on adrenaline these days that I know I will miss the crazy rush of it all once the film is done.

Thankfully I’ve got a super talented & supportive hubby Ivan who did the photoshoot with my two stunning lead actors Sam Simmons & Peter Christian Hansen on Saturday 3/25. They’ll be used for various promos and even props for the film. Below are just a few of the shots he took over the course of just 3 hours! 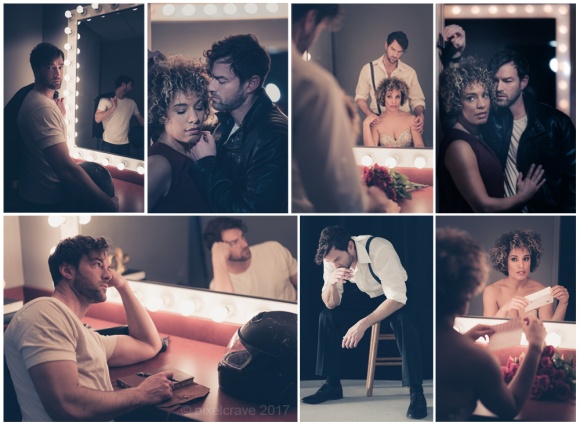 Well, there’s still much to be done between now and April 17… it’s been quite a thrill ride for me and I’m learning so much every single day.