When I first saw the trailer of Prisoners, I thought it looked like a made for TV movie that you’d see on TNT or some cable network. So I didn’t really have much interest in seeing it on the big screen, well after reading several high praised reviews online, I changed my mind.

The movie starts out with hunting trip between a father Keller and his son, Keller and Ralph Dover (played by Hugh Jackman and Dylan Minnette respectively). They caught a deer and drove home, during the ride back, Dover gave a speech to his son about survival of the fittest and such. Basically the filmmakers wanted us to know that this is a tough guy who worked very hard for everything he has gotten in his life and for his family. Also, he’s God fearing, a true patriot and a bit of a paranoia. Later, his whole family, including his wife Grace (Maria Bello) and young daughter Anna (Erin Gerasimovich) walked over to their friends and neighbors’ home for a Thanksgiving dinner. Here we’re introduced to their friends Franklin and Nancy Birch (Terrence Howard and Voila Davis), they too have two young kids.

While the parents were prepping dinner, the kids went outside and walked around the neighborhood. They came upon a suspicious looking RV, the two young girls wanted to play with it but the older kids told them not to go near it since they heard someone’s voice inside. Later after dinner, the two young girls wanted to go back to the Dovers’ home and pick up a toy, their parents told them they need to get the older kids to walk back with them. The girls said yes and left the room. Minutes later the parents couldn’t find their young ones and went down to the basement to ask the older kids where their sisters are? They said they haven’t seen them since dinner. Of course everyone got panicked and eventually they called the police.

We then were introduced to Detective Loki (Jake Gyllenhaal), who’s having dinner alone at a Chinese restaurant and tried unsuccessfully to hit on the waitress there. He got a call from his boss about the missing girls and was told about the RV. The police patrol men were able to find the RV and Loki arrived at the location and arrest the driver, a simple minded looking young man Alex Jones, played wonderfully by Paul Dano. Loki questioned Jones for hours but he refuses to tell him anything. Also, the forensic team couldn’t find any traces of the girls in Jones’ RV. So of course without any evidence to keep him, the police eventually have to let him go free. Dover heard the news that the police was going to let Jones go and decided to confront Jones while he’s leaving the police station with his aunt Holly (Melissa Leo). Upon the confrontation Jones mumbled something to Dover and he’s convinced that Jones is the person who took his daughter and her friend. I think people already know what happens after that since the trailer pretty much gave it away, so I won’t go much deeper into the plot. And to be clear, I’ve only described the first 30 minutes of the film, it’s two and a half hours long, I think you should go see it with as little knowledge as possible.

I mentioned earlier that the movie feels like a made for TV movie and I still believe that it is. But since it’s made for the big screen, the scope is much larger and with the great cinematographer Roger Deakins behind the cameras, the movie looks great. Deakins was able to the capture the dark and gritty feel that fits the tone of the movie. He was able to somehow made the usual boring American suburb neighborhood into a very creepy place, kind of reminded me of David Lynch’s Blue Velvet. Kudos also goes to Denis Villeneuve‘s direction, I’ve never seen any of his other films until this one and he did a good job of creating tensions and excitement. There were talks about how dark and violent the movie was, well I didn’t think it was that bad. Yes there were some intense moments but they didn’t show much, which is good. I thought it’s pretty tame compare to some other films in this genre, such Se7en or Silence of the Lambs. 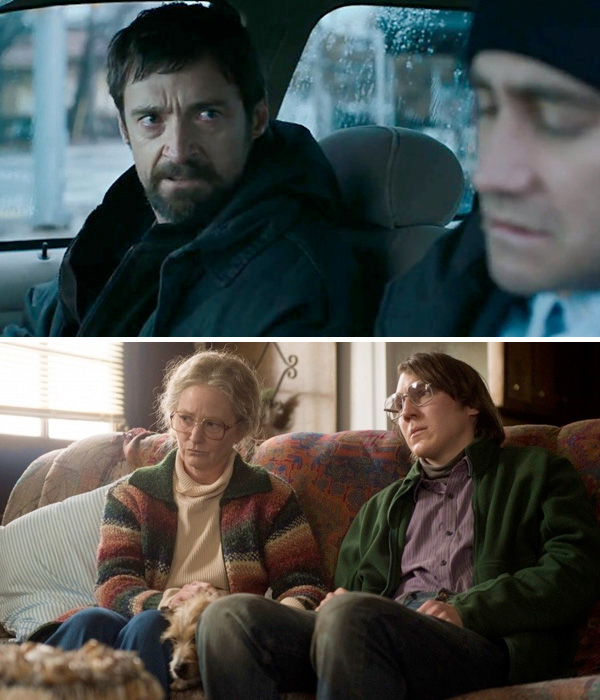 As for the script, it’s the usual by-the-book whodunit thriller and if you’re paying attention, you’ll able to figure who did it early on, but you’ll still enjoy the ride even though you won’t be surprise by it. There’s no M. Night’s “twist” ending here if you’re expecting that kind of thing.

Despite it being promoted it as a Hugh Jackman‘s vehicle, the main the protagonist’s actually Jake Gyllenhaal‘s character. I thought Gyllenhaal was serviceable as the lead detective but somehow I can’t buy him playing that role. I think I would prefer maybe an older or some not-so-well-known actor playing this role. Same goes with Jackman’s character, he really poured his heart and soul into the role but I still kept thinking of him as The Wolverine every time he got angry. When he started screaming, I expected to see those claws to come out. Again, maybe with a less-known actor who hasn’t played a superhero, he might work better as the hard working all-American suburban dad. As for the supporting cast members, Howard and Davis got their fair shares of screen time and they did a good job with their respective roles. Maria Bello unfortunately was relegated to just being the worried mother and didn’t have much to do. I thought Paul Dano was excellent as the main suspect, he didn’t have many lines in the movie but what he did with his eyes and body fit quite well of the kind of perverts and child molesters you see on TV.

My biggest gripe with the movie is the running time. I know they wanted to give all the famous actors some screen time but at two-and-a-half hours long, that’s way too much for this kind of movie. They could’ve cut out a couple of unnecessary scenes and made the movie a bit tighter. Despite the long run-time and the miscasting of the main leads, I still thought the movie was a very good suspense thriller. If you enjoyed movies like Mystic River, Gone Baby Gone or Zodiac, then I’m pretty sure you’ll like this one.

Just a warning for parents out there, you might not want to take your young kids to see it, they might get nightmares. At the screening I went, some parents brought their kids to the movie, I just went “WTF!”, did they think it’s a kind of movie their children would enjoy!? Seriously, what the heck is wrong with some of these parents?

What are your thoughts of this film? Let’s hear it!