When most adults hear the name The Addams Family, they’ll likely think back to the 1991 Barry Sonnenfeld live action movie, starring Anjelica Huston, Raul Julia and Christina Ricci. The film was based on the The Addams Family cartoon created by cartoonist Charles Addams and the 1964 TV series produced by David Levy. While The Addams Family existed as a cartoon, TV series and live action movie, there was never the existence of an animated feature movie, until 2019 when the directors of Sausage Party, Conrad Vernon and Greg Tiernan teamed up with screenwriters Matt Lieberman and Pamela Pettler to make the computer animated feature, with the thought of making the heavy source subject of death and darkness much more kid-friendly with likable characters and a snappy tune. 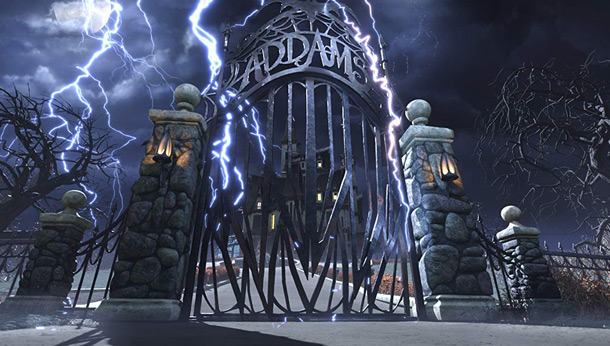 The story is similar but also it deviates from the live action version. Gomez Addams (Oscar Isaac) and Morticia Addams (Charlize Theron) are on the hunt for a suitable mansion after tying the know before being chanced out of town by an angry mob of villagers, when they stumble upon Lurch (Conrad Vernon), a former inmate at an asylum for the criminally insane. He leads them to the abandoned mansion/asylum in (of all places) New Jersey and becomes the Addams Family’s butler. There they raise two kids — Wednesday Addams (Chloë Grace Moretz) and Pugsley Addams (Stanger Things’ Finn Wolfhard) – and live at the mansion on a hill for years in comfort and peace, in isolation from the outside world. Thirteen years later, the Addams kids are now teenagers and have to start acting like adults. Gomez starts to prepare Pugsley for his upcoming Mazurka, a rite of passage every Addams family member takes, and they invite the whole extended family for the special celebration.

Wednesday finds a red balloon (insert murderous clown joke here, which they do) and confetti that make their way to mansion and begins to wonder what’s in the outside world. Speaking of, in a town that has formed down in the valley, and a TV show host and interior decorator Margaux Needler (Allison Janney) has discovered the less than pleasing Addams family mansion on a hill, and is hell bent on making it over and getting rid of its inhabitants. She spies on her neighbors though hidden cameras and an online app, which can easily be manipulated for maximum gossip and rumors to run wild in the town. Margaux’s daughter Parker Needler (Elsie Fisher) befriends Wednesday and they borrow styling tips from each other, with Wednesday adding some flashes of pink to her wardrobe and Parker going completely Goth.

The story finishes all too familiarly, with the townspeople and the extended Addams family coming together after Margaux tries to make them hate each other. There are good morals to be learned for those 13-and-under in the crowd, such as accepting others for who they are and saying that differences are what make us unique. There is a cute moment when Cousin It (rapper Snoop Dogg) rolls to the mansion with Snoop’s 2004 single Drop It Like Its Hot blaring loudly (well, at least the “G version” of the song) and we first hear Cousin It’s voice, which sounds like nothing but garbled words. Another song in the movie called My Family (Migos, Snoop Dogg, Karol G, and producer Rock Mafia) incorporates the famous The Addams Family tune and finger snaps, and talks about how “if you mess with me, you’re messing with my family.” The tune also features Spanish lyrics from Columbian singer Karol G, making this a multicultural tune, well in line with the massage of the animated movie.

Theron & Isaac as Morticia and Gomez

Snoop Dog as Cousin It

While this version of The Addams Family is nothing new and different for adults, this animated version is a terrific introduction for younger audiences (esp. those under 13) into the horror-themed genre. It should prepare them for the much scarier and darker versions of the franchise they might watch in the next few years.  Both adults and kids can enjoy the soundtrack, the wonderful voices of Charlize Theron, Oscar Isaac and Allison Janney. You’ll probably snap your fingers once or twice out the theater as you hum The Addams Family tune that gets stuck in your head — like a great earworm that it is.

Have you seen The Addams Family? Well, what did you think?