This review was part of Mark & Tom’s Decades Blogathon that was published back in mid May. But since July 6 is Eva Green’s birthday, I decided to post it here this week.

I can’t believe it’s been a decade since Casino Royale came out. I just re-watched it this weekend to refresh my memory for the blogathon, though I had probably re-watched it a few times in the last 10 years. It’s still as good as the first time I saw it, and I still would regard it as one of my favorite Bond films… ever. I’ve mentioned Casino Royale so many times here on my blog, in fact it’s one of my fave films of 2000s and one of the 8 films I’d take with me if I were stuck on a desert island.

Like many Bond fans, I too had trepidation about Daniel Craig casting (too blond, too short, etc.) but of course we’re all proven wrong the second he appeared on the pre-credit scene. Craig might not be the most good looking Bond actor (and he is the shortest), but he more than made up for it in charisma AND swagger. Apart from Craig’s brilliant casting, it’s the story that makes this film so re-watchable. It’s not only a great Bond film, it’s a great film, period. An origin story of sort, James Bond goes on his first ever mission as 007, and he didn’t get off on the right foot with M right away. The scene when M berated Bond when he broke into her flat was intense but humorous, a perfect balancing act the film continuously play throughout. It’s not the first time we see the venerable Dame Judi Dench as M, but I must say I LOVE the banter between her and Craig even more. 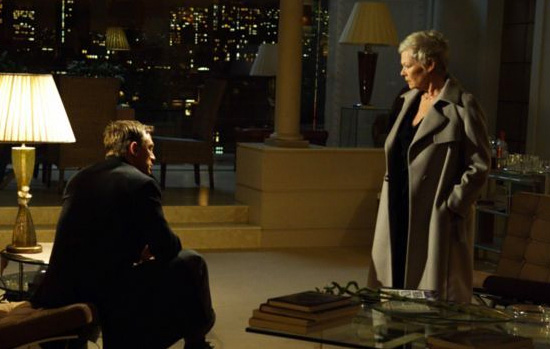 A great Bond film has to have an effective adversary and we find that in Mads Mikkelsen‘s Le Chiffre, a cold-looking Scandinavian with a bleeding eye. It would’ve been a silly gimmick if not played carefully, but here Le Chiffre is a cool and ominous villain. The fact that he’s really not a mastermind in the likes of Blofeld or Drax, but the fact that he’s not hellbent in ruling or destroying the entire world is frankly refreshing. He is a banker to the world’s terrorists, and so his only motive is money, like most of real world villains are. And a great Bond film also needs a memorable Bond girl. Well, Eva Green‘s Vesper Lynd is perhaps the hottest cinematic accountant ever. “I’m the money,” she quips the first time she enters the screen and into Bond’s heart. To this day I’m still enamored by the train scene to Montenegro, the way Bond & Vesper banter each other with wit and sexual undercurrents is what Bond movies are all about. Vesper is no Bimbo and that automatically made her a bazillion times more intriguing than bombshells in lesser Bond movies. 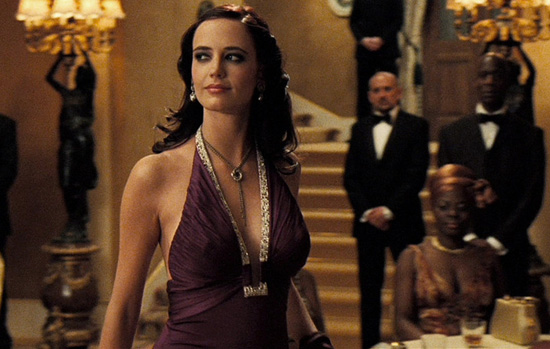 Casino Royale isn’t big on gadgetry, and as a longtime Bond fan, I actually didn’t mind it. It’s got everything else one would expect in a Bond movie – the cars, the exotic locations, the suspense, action and quick wit – it’s all there. Compared to Craig Bond movies, the Roger Moore versions feel more like a drama given how relentless and vigorous all the action sequences are. The opening parkour/free running scene apparently took six weeks to shoot and my goodness, I’m out of breath just watching it! This is one sprightly Bond and Craig did most of his own stunts, so it looks believable that he was the one doing the action in the movie. He reportedly has the injuries to prove it too! The car chase wasn’t overlong, but dayum was it memorable. The scene where Aston Martin missed Vesper by a hair and rolled over multiple times still took my breath away every time I saw it.

But all of that action stuff wouldn’t have mattered much without a grounding story. I think the last time Bond was genuinely romantic and emotional was On Her Majesty’s Secret Service, which was when Bond fell in love. The scene of Bond tenderly comforting Vesper in the shower is one of my favorite scenes in all of the Bond films. There is nothing erotic or sexual in this scene, instead it packs an emotional wallop that makes Bond/Vesper relationship one of the best and most convincing romances in a Bond movie. The love story in Casino Royale is core to the plot and it was woven perfectly into all the espionage intrigue.

Vesper: You’re not going to let me in there, are you? You’ve got your armour back on. That’s that.

Bond films are known for being an eye and ear candy, and this probably ranks as one of the most beautifully-shot. The scenery in Venice as Bond stroll in the Grand Canal is especially striking, topped off by the intense fight scene in a crumbling house (shot at Pinewood Studios modeled after Venice’s Hotel Danieli). The soundtrack also ranks as one of the best, done by David Arnold with an homage to the legendary composer John Barry. I can’t get over how much I love the track City of Lovers, which I’ve highlighted for my Music Break here. The theme song You Know My Name by Chris Cornell is also one of my favorite Bond songs, and the cards-themed opening sequence is spectacularly-done. 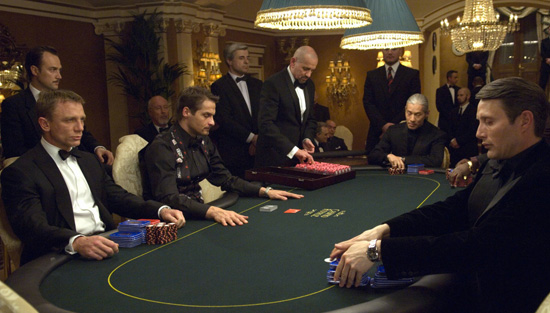 Per IMDb, this was the first James Bond movie to be based on a full-length Ian Fleming novel since Moonraker 27 years prior. Goldeneye‘s director Martin Campbell helmed the film from a screenplay from Neal Purvis, Robert Wade and Paul Haggis. I wish Campbell would be back in the director seat again as his previous two Bond films rate as one of my all time favorites. There’s so much style & sophistication in abundance here, but never at the expense of story & character. What I also love is that the quieter moments in the movie is still just as intriguing as the high-octane action scenes. That poker game in Montenegro is brimming with elegance as well as suspense, whilst showcasing the film’s excellent production design and costume design. Vesper’s plunging purple dress is a real head-turner and I don’t think Craig has looked more suave than in his tuxedo that Vesper tailor-made for him.

I really can go on and on about this movie as it’s really a masterpiece in the 50 years of James Bond films we’ve got so far. It also made me even more dismayed that the recent film in which the plot directly followed this one was such a downgrade. Looking back at Casino Royale‘s fantastic finale with Bond introducing himself to Mr. White, I expected SO much more than what they gave us with Spectre.

What are your thoughts about ‘Casino Royale’? Does it rank amongst your favorite Bond films?