Director Denis Villeneuve loves to make films about dark subjects, in his latest one he decides to tackle the dark world of war on drugs here in United States.

After a raid that’s gone terribly wrong on a home that belongs to a very powerful drug cartel, young FBI agent Kate Macer (Emily Blunt) decides to volunteer to be part of a secret mission that’s being lead by a mysterious agent named Matt Graver (Josh Brolin). She’s on a need-to-know basis on this mission, she also meets another mysterious agent named Alejandro (Benicio Del Toro); who tells her that they’re going to find the biggest drug dealer in the world and take him down. Their first task was to transfer a prisoner from Mexico back to the States but some thugs decided to attempt the break the prisoner free.

This lead to a shootout that killed all of the thugs in the middle of the highway and Macer was not too happy about it. She’s a by the book type of an agent and thought what happened during the shootout was illegal. But both Graver and Alejandro told her this is how it’s done in the real world and she has to deal with it. As the movie progresses, Macer starts to wonder if she’s in over her head and not sure if she could trust either of the men she thought had her back. 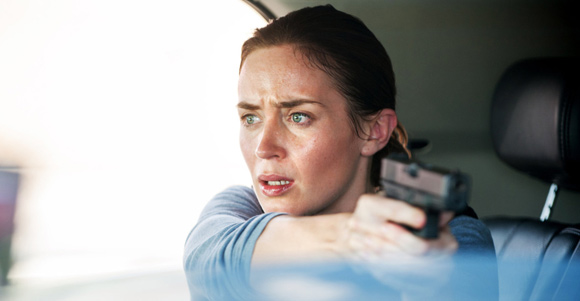 I can’t say that I’m a fan of Emily Blunt since I haven’t seen many of her work. But she’s very good here as the ambitious young agent who thinks she can make a difference. Basically she represents us the audience, she’s seeing this ugly world of drug war for the first time, there are no rules and innocent people gets kill in the middle of it. Brolin is his usual self; he’s a mysterious character that you don’t really know which side he’s on. Del Toro on the other hand, really shines in this movie. His character is a cross between James Bond and Anton Chigurh from No Country For Old Men. He’s a cold blooded killer that can’t stop, but there’s a reason behind his madness. 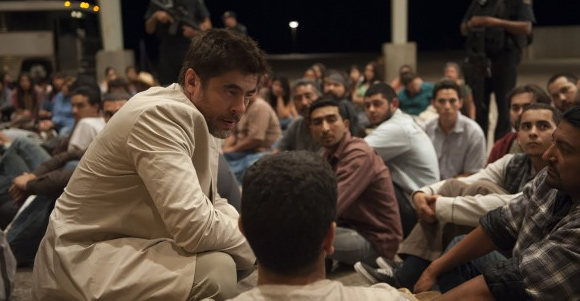 Director Denis Villeneuve did a great job of setting up the tension of every intense scenes but chose not to show the graphic violence you’d expect in this kind of film. The script by Taylor Sheridan is very well-written and full of twists and turns. For example, there’s a potential love story that I thought would derail the movie but then it turned ugly real fast. You think you figured something out, but he threw a curve ball at you.

Last but certainly not least is Roger Deakins‘ excellent cinematography, just like his other famous work, the shots in this film were all jaw dropping. There were a lot of wide shots of landscape and city that you have to see on the big screen to appreciate his beautiful work; maybe the Oscar voters will finally give him the golden statue this year.

With great performances, tight direction, well-written script and superlative cinematography, this is one of the year’s best films and I can’t wait to see it again. It’s very highly recommended.

So have you seen SICARIO? Well, what did you think?