Well, now that I’ve posted my Top 10 Movies of the year and picked my Top 10 favorite FEMALE Performances and Top 10 Film Scores of the year, I’m finally down to my last 2014 Recap list. It’s quite a crowded category, more so than the female counterpart, as obviously there are more roles for men as there are for women on any given year. But I’m still picking only 10 on the main list, and another 15 on Honorable Mentions (there are just too many to keep it to just 10). Naturally these are performances from films I got a chance to see last year. So in case you’re wondering where’s Jake Gyllenhaal, Eddie Redmayne or J.K. Simmons, well I haven’t seen Nightcrawler, The Theory of Everything nor Whiplash.

Same w/ the ladies, this list is in alphabetical order, as it was tough enough to narrow ’em down to 10, let alone ranking them. So here goes:

It’s one of those transformative roles that all actors are privileged to get but not everyone can pull it off. Well, I always think that Steve Carell is a much more versatile actor than people give him credit for and Foxcatcher‘s director Bennet Miller said during our interview that “…it’s exciting when an actor breaks out of what’s expected of them.” But it takes so much more than just putting on a fake nose to create a convincing character. I’ve seen him in serious roles before in Little Miss Sunshine, but took his dramatic potential up several notches here, displaying disquieting menace and creepy demeanor I’ve never seen before. As I’m writing this, I couldn’t help recalling his earlier role as Evan Baxter in Bruce Almighty, yet I couldn’t fathom that they’re played by the same actor!

Benedict Cumberbatch is no stranger to playing an eccentric genius on screen. But apart from being British and a brainiac, Alan Turing couldn’t be more different than his Sherlock persona. Cumberbatch effortlessly captures that brilliant intellect and that arrogant, dismissive attitude towards the world around him, but he also convincingly conveys Turing’s inner tumult. The final scenes where Turing is treated as a social outcast is the film’s most heart-wrenching moments. All the pain, anguish and utter despair is palpable on Cumberbatch’s face but without a moment of overacting. It’s no doubt the actor’s shining hour, a personal best even amongst his already impressive resume.

In a year when he’s truly coming into his own as Steve Rogers, aka Captain America in its sequel, Chris Evans also emerges as a capable indie leading man. Certain actors often become stuck to play certain roles because of how they look and I think Evans is one them. But Evans is more than just a pretty face & a hot body, even if his role choices are questionable at times. I saw that he has dramatic chops in Puncture but this is an even more complex role – not to mention a better-crafted film overall – and he gets to show what he can do as an actor. As a conflicted rebel leader with a dark past, Evans displays an unusually somber, soulful and heartfelt performance. I’d love to see him tackle more dramatic roles like this in the future, he certainly has it in him.

Whilst Carell is comedian playing a dark role, the normally-serious Ralph Fiennes got to do the opposite. It’s such a thrill to see him being so goofy here, and he seems to relish in the character’s inherent zany-ness. Apparently Wes Anderson wrote this role specifically for him, which I think is an inspired choice that absolutely paid off. His deadpan delivery is really fun to watch here, and he has that effortless elegance about him too that fits the role of the legendary concierge M. Gustave.

It takes an actor of a certain charisma to hold your attention for 1.5 hour long when all you see is him inside a car the entire time. But charisma can only go so far without the skills, but thankfully, Hardy’s got both. This is the first film with him in the leading role, after seeing him stealing scenes left and right in films like Rocknrolla, Inception, and The Dark Knight Rises. He was a co-lead (with Joel Edgerton) in Warrior, an intensely physical role that he offsets with layers of vulnerability. As a man grappling with one VERY stressful night of his life, his body is barely shown the entire movie, so he had to rely on his eyes and facial features to convey every single emotion. Suffice to say, he delivered with aplomb. It’s a mesmerizingly-nuanced performance that confirms my opinion that Hardy as one of the finest actors working today. Seems that he’s only just getting warmed up.

One of the highlights of 2014 cinema for me is definitely seeing the perpetually-underrated Michael Keaton getting a career resurgence. I’ve been a fan of his for as long as I can remember, as he’s the kind of actor who can tackle hard-hitting drama as well as silly comedic roles effortlessly. In Birdman he gets a chance to tackle both and he relish in that opportunity. He’s been garnering kudos left and right and he’s the one I’m rooting for the entire award season. The fact that there are many similarities between his character Riggan and his professional acting life certainly adds a dose of amusement as well as authenticity to his portrayal. Keaton infused Riggan with such depth and genuine pathos that even during some of the film’s most bizarre scenes as Riggan descend into madness, he’s always emotionally engaging.

If only you more people had seen at least one version of this romantic drama, even just to see how good both lead actors are. McAvoy’s co-star Jessica Chastain is on my Top 10 list of Female Performers from the same film. I’ve been a fan of James McAvoy since Atonement and the Scottish actor has since done an amazing job balancing big blockbusters like X-Men: First Class to small indies like this one. He’s an instantly likable actor who I vehemently believe is more talented than people give him credit for. What I love about McAvoy is that there’s always such a natural way to his acting that you instantly believe he’s that character. Here he wears his character Conor like an old shoe, a man desperately trying to somehow regain his lost love. There is a moment in the film where Conor is alone in an empty apartment and he reminisce on his marriage that is absolutely heartbreaking. It’s a shame that AMPAS doesn’t even notice this film as both Chastain & McAvoy’s marvelous performances are certainly Oscar-worthy.

Another highlights from Birdman and why this is truly one of the best films of the decade is seeing Ed Norton in a role worthy of his talent. It’s definitely a scene-stealing role in a film that’s already jam-packed with fine performances. Just like his co-star Keaton, Norton did a brilliant dramatic and comedic turn as a self-absorbed diva of an actor who’s more comfortable in his own skin when he’s on stage. All the scenes of him and Keaton are truly the film’s highlights as both actors not only baring their skin down to their underwear, but they also bare themselves emotionally. It’s too bad that he probably won’t win an Oscar again this year, but I sure hope the three-time Oscar nominee won’t be wasted playing second/third banana in subpar movies like Bourne Legacy ever again.

I’ve made my quibbles known about one of the egregious snubs of this year’s Oscar. But if there is justice in the world, this wouldn’t be the last we see Oyelowo’s name being mentioned during cinema’s award season. Even in bit parts in a myriad of movies ranging from Rise of the Planet of the Apes, The Help, Jack Reacher, etc., I always notice his performance. He finally got to shine in a prominent supporting role as Forrest Whitaker’s teenage son in Lee Daniels’ The Butler, which also deals with the Civil Rights Movement. It’s interesting that a year later he got to play the key figure in that historical movement, a role that I read he’s been dreaming to play for some time. Oyelowo didn’t just get Dr. Martin Luther King Jr.’s mannerism and speaking style right, it’s more than just a brilliant impersonation but he truly embodied the role. What’s more, he portrayed Dr. King as not just a heroic figure but as a man, flawed and plagued with doubts just like any regular person would. He is just as convincing as a powerful and persuasive orator as he is in the quieter scenes that demand subtle nuances. I can’t wait to see what Oyelowo will tackle next. 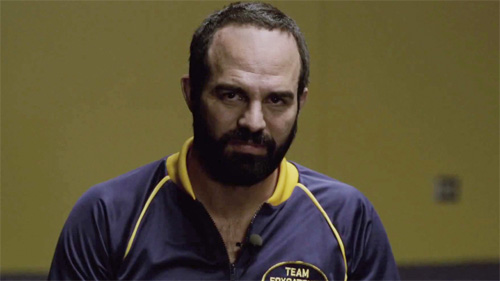 Is there anything Mark Ruffalo can’t do? I feel like I’ve been missing out as for whatever reason I didn’t really pay attention to him until recently. I was going to list his performance in Begin Again but technically that’s a 2013 film, but man what an astounding display of versatility. His role as an Olympic pro-wrestler David Schultz in Foxcatcher couldn’t be more different than a distressed & disheveled record producer in Begin Again but he’s utterly believable in both. Ruffalo’s role is actually the least flashy compared to Steve Carell’s and Channing Tatum’s, but his character is no doubt the heart of the film. It’s a role that demands the perfect amount of nuance and subtlety and Ruffalo pulls it off wonderfully. The video interview scene alone when he’s asked to describe Carell’s character is simply masterful, I remember marveling at how good his performance was as I was watching it. I think that might’ve been what earned him his second Oscar nomination.

I truly didn’t expect to see some names would end up on this list. I honestly have never seen Tyler Perry nor Zach Galifianakis in anything other than clips of their movies, but they definitely left an impression on me in their respective films. There are some big breakthroughs here too, especially Dan Stevens and Chris Pratt, garnering a lot of buzz in their successful starring roles. There are also some perennial favorites of mine who definitely still got it (Keanu Reeves), as well as a brand new actor I’ve never seen before. Manish Dayal‘s like the male counterpart of Gugu Mbatha-Raw for me and I hope to see him more movies! As for Guy Pearce, I sure hope that he will get the recognition he deserves one day as he’s simply a phenomenal actor.

Here they are in random order:

Thoughts on these male performances? Which one(s) of these stood out to you from the past year?