I came to appreciate Wes Anderson‘s films through his third feature film The Royal Tennenbaum a few years after its release in 2001. I enjoyed it but I didn’t immediately become a fan right away, his movies are definitely an acquired taste. Since then I have only seen three more from his work, The Darjeeling Limited, The Fantastic Mr Fox and Moonrise Kingdom. I never really quite anticipate Wes’ movies until this one though right from the first time I heard about the premise. I was hooked not only because of the usual stellar cast, but the story just sounds like a joyful romp.

The film centers on the adventures of Gustave H, a legendary concierge at a famous European hotel between the wars, and Zero Moustafa, the lobby boy who becomes his most trusted friend. I’ve always loved stories about unlikely friendship, and it couldn’t be more unlikely than Gustave and Zero, played brilliantly by Ralph Fiennes and newcomer Guatemalan actor Tony Revolori. When you see a Wes Anderson’s movie, you’re invited to an eccentric world where everything is symmetrical and painted in a retro-looking, highly-saturated color palette. It’s within this meticulously-stylized macrocosm that he set kooky scenarios of his equally quirky characters. The film was set in an old hotel in Görlitz [on the Germany-Poland border] and there’s a whimsical cartoon quality about it despite being a live-action film. Apparently Wes did complete the animated version before he started filming this, according to this article. 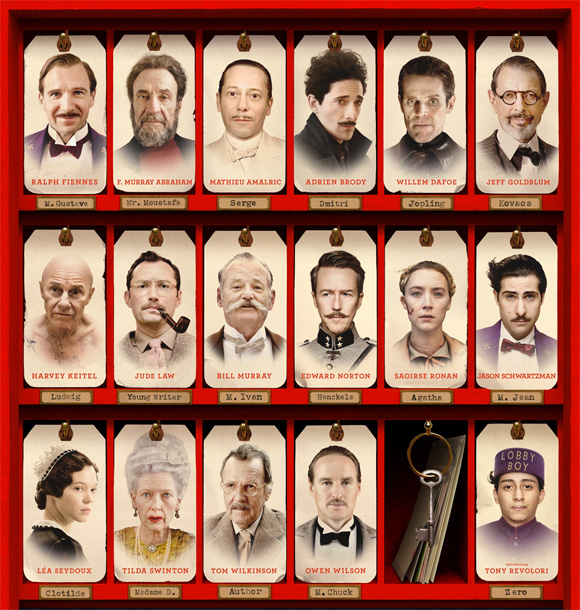 It’s a story within a story, starting with an author (Tom Wilkinson) recounting his memoir based on his encounter at the Grand Budapest Hotel, located in the fictional Republic of Zubrowka in Central Europe. We then see the author as a young writer (Jude Law) staying at the hotel and ended up having dinner with the mysterious hotel’s owner Zero Mustafa (F. Murray Abraham). The movie takes place primarily in flashback mode in the early 30s, as Zero recounts the adventure he had thirty years earlier with the renowned Monsieur Gustave (Fiennes). Gustave ran the hotel almost with an iron-like precision, who’s apparently known for wooing the older ladies who frequent the hotel. It turns out most of them came to see him, including the 80-something Madame D. (an unrecognizable Tilda Swinton). It’s when she passed away that the real adventure begins, involving Madame D’s huge family fortune and a priceless Renaissance painting.

It’s fun to see what Wes has in store with each of the cast member, including his BFF Bill Murray who yet again has a cameo in their seventh collaboration. I have to admit that whenever each of these well-known actors show in various scenes, it did take me out of the story a bit, but soon I was caught up in the story again. There’s an underlying dark story about war and the dramatic continental change, after all, the memoir Wes was inspired by (The World of Yesterday by Stefan Zweig), describes Austria at the start of the 20th century as it’s anticipating Nazi persecution. But a lot of the violence as well as sexuality are played for laughs here and they’re shown only briefly on screen. It still made me wince though seeing even a glimpse of an old woman performing fellatio on Gustave, one character losing all his fingers in a rather gruesome way, as well as a display of a severed head.

The hotel is practically a character in itself, where most of the adventure takes place. The retro-looking saturated color palette feels a bit brighter with the addition of the pink color of the hotel exterior and the box of the old-world pastry of Mendl’s bakery, which plays a pretty big part in the story. I appreciate the visual treat of Wes’ idiosyncratic camera work and the precise symmetry of each shot makes for an amusing contrast to the haphazard and chaotic scenes. There’s a journey theme here that we often seen in Wes’ films (again involving trains). Either the characters are running away from or towards something, sometimes both. This is also perhaps one of the most action-packed of all his movies — part road movie, part heist, complete with a snowy ski/sled chase scene as farcical as in the Roger Moore’s Bond flick For Your Eyes Only. Some of the action scenes, like the shootout at the hotel, felt over the top to me though.

Ultimately, the heart of the film belongs Zero Moustafa, whose loyalty, bravery and selfless-ness saves Gustave time and time again. There’s a sweet romance between him and Agatha (the always excellent Saoirse Ronan), whom the older Zero speaks of as being the love of his life. There’s a scene where Agatha is reciting poetry about her romance with Zero is a welcomed tender moment amongst all the droll and wacky scenarios. Similar to the two newbie actors playing young couple in Moonrise Kingdom, Revolori is quite memorable here even with his zany, deadpan expression. Abraham as the older Zero adds gravitas and emotional resonance to his character even in his brief scenes. I rarely see Fiennes in a comedic roles but that actually adds to the peculiarity of his character. I read that Wes wrote this role for him, which I think is an inspired choice. The rest of the supporting cast did a nice job, with Jeff Goldblum, Ronan and Adrien Brody being my favorite. Ed Norton‘s character seems quite similar to the one he did in Moonrise Kingdom, which reminds me it’s been a while since I saw him in anything but small supporting roles. Harvey Keitel and Willem Dafoe played the kind of tough guy persona I’ve seen in other films, but it’s still amusing to see them here. 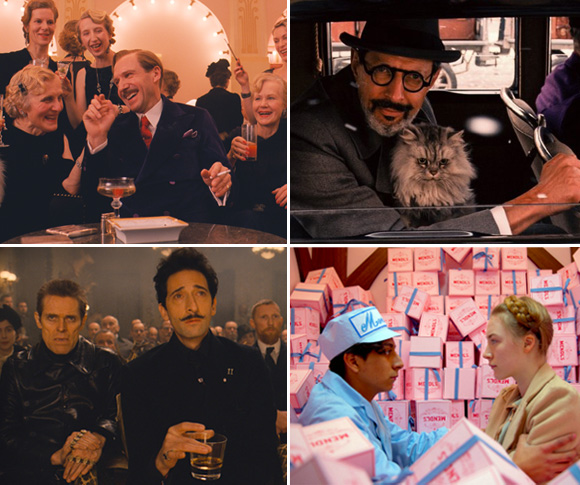 When I look back at previous work of Wes that I’ve seen, this one perhaps rank pretty close to The Fantastic Mr. Fox, which I consider my favorite of his work. I was quite invested in the two lead characters, particularly Zero, more than I’ve ever felt about previous Wes Anderson’s characters. There’s a lot of stuff happening in this movie that it was discombobulating at times, but it was an entertaining ride. I thoroughly enjoyed it and the pace felt swifter than his other films, so there’s not a boring moment for me here. Mischievously whimsy, but with heart. Like a charming hotel, it’s one I wouldn’t mind revisiting again and again.

What did you think of Grand Budapest Hotel?