Hello everyone! I’m planning of launching a Casting News Roundup series in the coming weeks, something I’d update a couple times a month. I even made the banner already 😉

Casting can make or break a film and to me, casting is a big part of whether I want to see a certain film or not. Of course the story and genre are essential, and sometimes the directors are the ones that get me to see a certain movie. But for the most part, the actors have the biggest influence in the movie selling process to me.

Well, let me start off with a couple of casting news that piqued my interest. One is a remake of one of my favorite films of all time: Ben-Hur. I’ve blogged about the rumor that Tom Hiddleston was offered the role, well it seems that he’s passed on it and now Jack Huston has been cast as the Jewish prince Judah Ben-Hur.

Now I would’ve loved to see Hiddles in this role and that’d undoubtedly put my butt on the seat but y’know what, I don’t mind seeing Huston in this role. I’ve only seen him in American Hustle, but TV fans are likely familiar with him from his role as the scary-looking Richard Harrow in Boardwalk Empire. Huston’s got quite an acting pedigree, being the grandson of director John Huston and nephew of Angelica Huston. I like that he’s got one of those chameleon-like face, he reminds me of a young, pre-Jack Sparrow Johnny Depp. I’m curious to see what he could do with the role and what that means for his career. 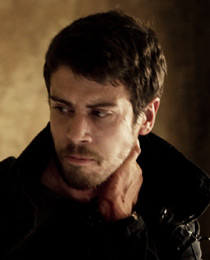 Now the Messala casting came soon after, with Toby Kebbell (Mr. Rocknrolla himself) taking on the friend-turned-foe Roman soldier. I like Kebbell, he was pretty good in War Horse and he did a terrific mo-cap work as Koba in this year’s Dawn of the Planet of the Apes.

Well, so far I like the casting of these two young Brits, they may not be as well-known yet but they’ve churned out pretty good performances so far. Before these two main castings were announced, Morgan Freeman was cast as Ilderim [renamed Ildarin in the new film apparently] as the Arab sheik whose chariot Ben-Hur rode in the epic chariot race. I LOVE Hugh Griffith in the original, but think Mr. Freeman would add the right amount of gravitas for the role. I just hope the film itself will prove to be a swords & sandals epic worthy of the cast and the incredible story it’s based on.

Well, TV fans should know by now about this news. More and more film actors are now coming to TV, in fact I think the lines between TV and Film actors are blurred now, and I personally think a good actor should be able to juggle multiple mediums. A lot of my fave actors balance stage, film, and TV work seamlessly.

In any case, so Colin Farrell has now joined True Detective 2.

He’s quoted at Buzzfeed as saying:

I know it will be eight episodes and take around four or five months to shoot. I know very little about it, but we’re shooting in the environs of Los Angeles which is great. It means I get to stay at home and see the kids.

The article also says that Rachel McAdams and Elisabeth Moss are apparently vying for the role opposite him. I still need to see this series [yes I know, I should get on that!], but I knew it’d be tough to follow up Matthew McConaughey and Woody Harrelson. Colin’s been in a bunch of hit and miss projects but generally I like him, I think he is a talented actor and he should do well in this series.

Other casting news: Apparently former Dr Who Matt Smith is going to play Mr. Collins in the Pride & Prejudice & Zombies. WOW, how long has that movie been in development hell?? I blogged about it back in 2009 when Natalie Portman was attached to play Lizzie Bennet.

So what do you think of these casting choices? If you have other casting news you’re excited about, do share!

65 thoughts on “Question of the week: Which casting news are you excited about from the past few weeks?”