Welcome to October, folks! Autumn is officially here, though yesterday morning felt like Winter with temp in the 40s already, ugh. Autumn in Minnesota is rather unpredictable. We went from mini dress + sandals weather to jacket + boots in the span of 18 hours! I sure hope we still get some Indian Summers in October though, fingers crossed.

It’s yet another slow month for press screenings for me. Either the timing doesn’t work out or I’m simply not interested enough in seeing them. I also didn’t watch a lot of new stuff, but did see a lot of old favorites, some are Toby Stephens-related [natch!] But hey, October is TCFF month so there’ll be a heck of movies to watch this month, yippee!!

The Extraordinary Adventures of Adèle Blanc-Sec (2010)

The Disappearance of Eleanor Rigby: Them (2014)

The main draw for me was of course the two female leads. I LOVE seeing real-life Dame BFFs Judi Dench and Maggie Smith together on film, and they played sisters in this one. Their lives was turned upside down when a mysterious foreigner washed up on the beach of their 1930’s Cornish seaside village. Daniel Brühl played the young stranger whom Dench became infatuated with. It’s a sweet and touching film, though there’s a 30+ age gap between Dench and Brühl, it’s not at all creepy and their bond is more of a soulful nature. The pace is a bit on the slow side though, but the actors were able to keep my interest. There’s drama with a bit of mystery here as Brühl‘s character befriends a Russian woman, played by Natascha McElhone. Game of Thrones‘ actor Charles Dance actually directed this one and I think he did a great job! There’s gorgeous violin music here too, courtesy of Joshua Bell, though Brühl did a convincing job pretending to be a maestro violinist. (3.5 out of 5) 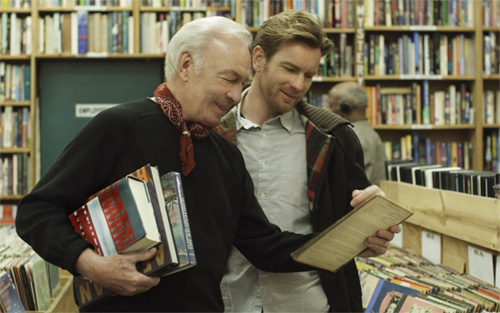 I’ve been wanting to see this for ages, glad we finally did. It’s quite a moving story about father/son relationship, and how a young man named Oliver deals with his dad, Hal, coming out as gay AND he also has terminal cancer. The story weaves back and forth between the time they spent together and the time following Hal’s death. I thought all the relationships presented in the movie was dealt in a touching, funny and poignant way. Christopher Plummer won an Oscar for his performance and rightly so. But I have to say Ewan McGregor‘s sensitive performance was terrific as well, and so was Mélanie Laurent and Goran Visnjic in the supporting roles. (4 out of 5)

This is an easy pick for this month. It’s definitely going to be on my Top 5 Favorite Blindspot films of the year. It’s my first viewing of Barbara Stanwyck but certainly won’t be the last! I need to check out more Billy Wilder’s work, too!

What I’m looking forward to in October:

October is always an exciting time for me because of TCFF. Hope you’ll stay tuned for the coverage and reviews!

What you won’t see here this month is any kind of horror/slasher marathon of any kind. I’m not a fan of that genre nor do I generally celebrate Halloween, so this site will remain relatively horror-free.

So, what movies did you get to see in September and which one is your favorite?