Happy Sunday everyone! We’ve got a couple more MSPIFF 2014 reviews courtesy of Josh from JJAMES reviews.

A Swedish film written and directed by Lisa Langseth, Hotell follows Erika (Alica Vikander), a beautiful and pregnant young woman with an almost idyllic life. Already moneyed and apparently successful, she and her husband, Oskar (Simon J. Berger), have a plan for including an infant in their lives, one that begins with a pre-arranged Caesarean Section.

But their plan falls apart when their son’s birth goes horribly wrong, a fact that mandates the couple adjust. Oskar manages well enough. Erika does not, instead slipping into deep depression, because of which she joins a support group that includes Rickard (David Dencik), Pernilla (Anna Bjelkerud), Anna-Sofi (Mira Eklund) and Peter (Henrik Norlen). Each of Erika’s new friends are, in their own way, ill, and, like Erika, tired of feeling conflicted, so when she proposes an unconventional plan to collectively escape their lives, for an indeterminate duration of time, they accept. Along they way, they informally try to help one another.

Hotell has many merits. First, and most notably, Langseth portrays mental illness exceptionally well, never playing it for laughs or forced sympathy, but rather showing its complexity and potentially debilitating consequences with acute empathy. It might be the best such portrayal I have ever seen, in any motion picture or television show.

Moreover, Erika and Rickard are complex, vibrant characters. Oskar could be one, as well, if he had received more focus. Plus, all of the performances are top-notch, especially Alicia Vikander’s.  Her every expression shows a veneer of reserve and composure, but also underlying vulnerability mixed with grief and guilt, facts that are praiseworthy enough, but become all the more so when considering Vikander’s two most explosive scenes. She is award-worthy good. Mira Eklund, who plays Anna-Sofi perfectly, is almost her equal. 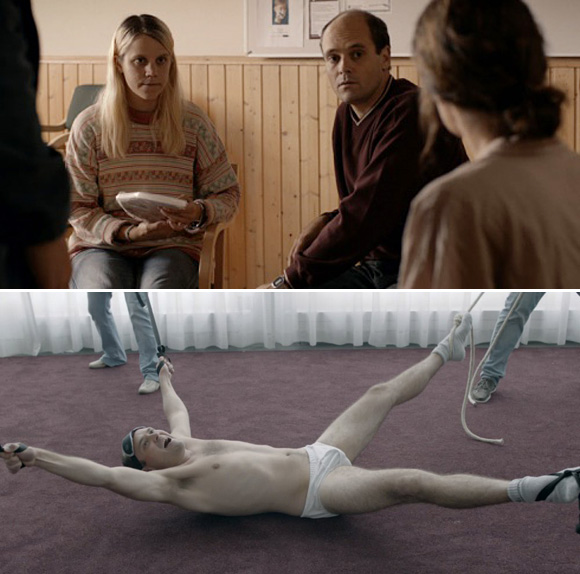 Yet, despite its many merits Hotell is not as emotionally moving as it could have been, largely because Langseth doesn’t develop her secondary characters well. Oskar all but disappears for most of the movie’s last three acts, and Peter, Pernilla and Anna-Sofi are too simplistically drawn. Just as their illnesses are not given enough attention.

It is doubly disappointing, because Langseth daringly bucks genre expectations. Here the therapy group is not particularly good for each other, and none of them are necessarily ‘cured,’ facts that help solidify Hotell’s themes. And would have done so even more powerfully if some of the characters had been better developed. 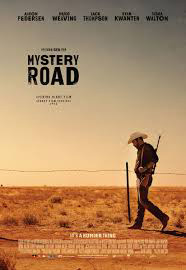 Mystery Road is ostensibly a police procedural about Australian outback Detective Jay Swan (Aaron Pederson), who investigates the murders of indigenous girls. In that sense, the film is predictable, opening with Swan being assigned a murder case and following him through his investigation. Eventually, of course, he learns the truth, and then must grapple with the personal consequences of his new, and dangerous, knowledge. If we only consider the plot, Mystery Road is borderline formulaic and certainly not inventive. On the other hand, if that is all we consider, we are unfairly pigeonholing this complex movie.

Because, in a master-class display of showing not telling, filmmaker Ivan Sen (the picture’s writer, director, editor, cinematographer & composer) ensures the story is tertiary, important only as a vehicle to represent setting and characters, in that order. Therein is why Mystery Road opens with sweeping, late-night aeriel shots of the rural outback. The wide angles are impressive, but made all the more so by their juxtaposition with close-ups of a truck driver (Hayden Spencer) using a flashlight to check his rig’s tires and then, after hearing a howling dog, to light his walk through nearby terrain. The sequence is wordless and slowly paced, meaning our focus is on the location, not the trucker himself and certainly not his actions. Perhaps that’s why we’re startled when he finds the first body, that of Julie Mason.

At that point, Sen cuts to protagonist Jay Swan. Now we watch the detective, becoming intimately connected to him at the same time we learn more about Winton, a rural town. Swan asks his Sergeant (Tony Barry) for extra manpower to help him investigate Julie’s death, but he’s rebuffed. So he works alone, encountering racism aplenty. Some of the residents he meets are indigenous, like Swan’s ex-wife, Mary (Tasma Walton), and his daughter, Crystal (Tricia Whitton). They live in small houses. Others are white and own farms with larger homes. Still others, including Johno (Hugo Weaving), are morally obscure, leaving us to ponder their objectives. All of which contributes to Mystery Road’s greatest strength: neither Sen’s filmmaking technique nor his screenplay tell us what to think; he shows the conditions in which his characters live and trusts that we’ll understand his message.

That Jay is well developed and that Pederson is captivating helps, as well. As do the strong supporting performances (special mention to Weaving and Walton), and the interesting secondary characters, most of which make sense. Johno is the lone exception. Even in the movie’s climax, we do not comprehend his motives. Johno is Mystery Road’s biggest misstep, but it is easy to overlook. As is the film’s other mistake: having so many characters that tracking them is difficult.

The flaws do not limit the picture’s effectiveness, because Sen’s minimalist filmmaking is entrancing. He uses his simple score infrequently and powerfully, punctuating scenes and cementing emotion. Ditto that for his almost tangential dialogue, and his camera work and editing cuts, each of which are reserved. The director’s decisions immerse us in his setting.

As if it isn’t sufficiently clear, Mystery Road is almost magical and surely one of the best movies at MSPIFF.