Happy Monday everyone! I’m slacking off a bit here, I was hoping to get my Breathe-In review this weekend but just couldn’t find the time to do it. But I was supposed to catch the Brendan Gleeson/Taylor Kitsch comedy The Grand Seduction on Friday but I made a snafu that I didn’t order an extra ticket for my hubby so I have to go to the Sunday night screening instead. So I’ll post my review of Breathe-In together with that one as soon as I get around to it 😀

Well, this weekend I got to see a pretty cool sci-fi indie The Machine: 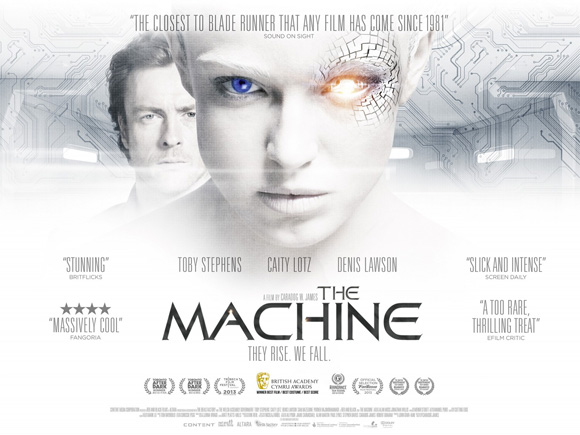 This British dystopian sci-fi has obvious nods to Blade Runner. In fact, it says right on the synopsis and the marketing itself. As a fan of Ridley Scott’s sci-fi classic, I was naturally intrigued. Instead of a story of a cop hunting down replicants aka robots, The Machine‘s protagonists are two artificial intelligence (AI) engineers who are working together in a futuristic era where a world is in an economic crisis and a cold war with China is brewing. Their boss is the Ministry of Defense Thomson (Denis Lawson) who’s hellbent on winning the arms race by creating a robotic soldier. The main scientist, Vincent (Toby Stephens) is morally conflicted about his job, but he does it because it’s the only way he could have technological access to help his ailing daughter.

The meat of the story takes place after Vincent’s new science partner Ava (Caity Lotz) is brutally murdered and he then created a cyborg in her likeness. Soon Thomson’s real motive is quickly revealed and Vincent’s life is endangered as he becomes a potential victim of his own creation.

Despite the low-budget production (less than $2 mil), I think writer/director Caradog W. James‘ did a nice job in creating a thought-provoking film that’s also visually arresting. The homage to Blade Runner is evident in his stylish visual style with the bleak futuristic setting and use of neon lights, as well as its use of synthesizer music that evokes Vangelis’ theme. I like sci-fi films that’s more atmospheric and even a little bit moody, instead of an all-action extravaganza like Elysium, and that’s partly why I enjoyed The Machine. There’s a lot of heart in the relationship between Vincent and his daughter, as well as with Ava even in robotic form. The developing relationship between a human being and an AI is nothing groundbreaking and foreseeable, but when done well, it’s still fascinating to watch. The love story is also not overblown which adds to its realism.

Both Stephens and Lotz did a nice job in their respective roles. Stephens’ got that brooding, tortured soul thing down pat which works well for this role, and Lotz whom I’ve never seen before is especially impressive. Her transformation from a curious scientist to an AI with childlike vulnerability but deadly power is quite convincing, and I find her struggle with the loss of her humanity pretty moving. She obviously looks more robotic than any of the replicants in Blade Runner, and Lotz gets the mechanical mannerism perfectly. Action fans would certainly appreciate her dance-like but lethal kickboxing moves. The film is rated R for some brutal and bloody action sequences from start to finish. 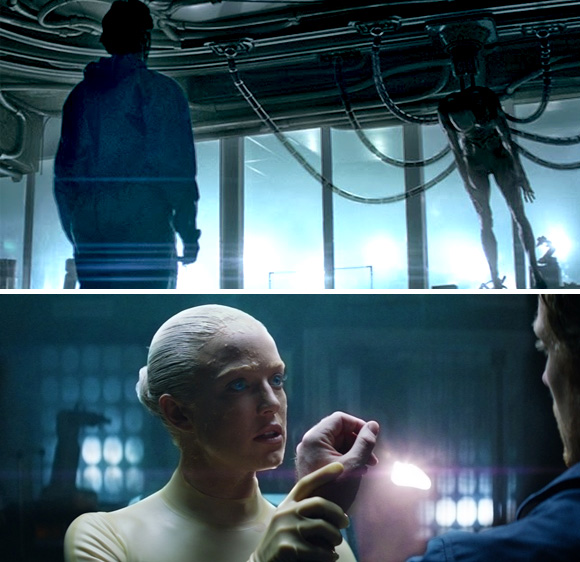 The story is not perfect though, it gets predictable as the film progresses and some things are not explained too well. The side effect of the sensor-restoring brain implants on the fatally-wounded war veterans *recycled* for the project is that they render them mute as they become cyborgs. For some reason they can still speak in intelligible robotic voice to each other, though later they regained their speech ability and it’s never fully explained why. Despite that, it’s pretty darn entertaining and I highly recommend it if you’re into this genre. The intimate feel of the story gives a nice lingering effect after I watched it, and the ending is perfectly eerie as we imagine what a plausible future shared with an AI could be. The Machine proofs that you can still make an engaging film even on a shoestring budget, I’m curious to see what James would do with more resources at his disposal.

Has anyone seen this film? Curious to hear what you think.