Happy Friday everyone! TGIF is the word and not only because it’s the end of the workweek, but because today FlixChatter is shining the spotlight on a UK indie feature film called The Fitzroy! 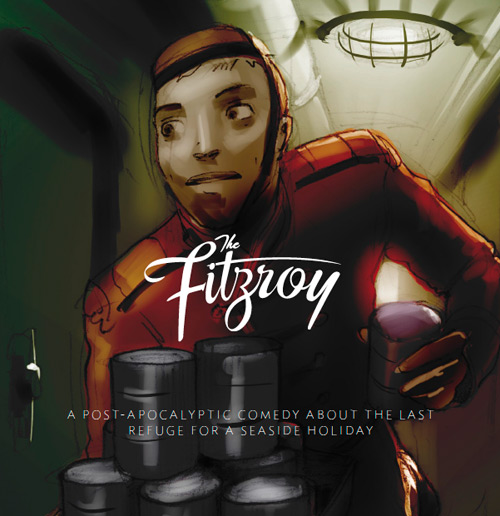 I first heard about this film earlier this month when I ‘met’ producer James J. Heath via Twitter. At the time their Kickstarter project hasn’t launched yet, but I checked out the film’s website and quite like what I saw. As a graphic designer and a movie buff, I just love how well-thought out and creative this project is, I love the illustrations and the sense of whimsy of the whole project. The video, website, blog and other promotional materials seems really well put-together, so obviously the Fitzroy team has worked diligently and should be on their way to make their dream a reality!
…

The Fitzroy – A black comedy feature film set in an alternative post-apocalyptic 1950s on a submarine hotel.

Set in an alternative post-apocalyptic 1950’s, The Fitzroy hotel, a derelict submarine beached just off Margate, is the last place for a traditional summer holiday. Bernard, the hotel’s bellboy, cook, maintenance man and general dogsbody faces a constant battle to keep the decaying hotel airtight and afloat.

But when he falls in love with Sonya, a murderous guest, he is thrown into a world of lies, backstabbing and chaos. As Bernard struggles to hide her murders from the other guests and suspicious authorities, the hotel literally begins to sink around him. As his world implodes, Bernard must choose between the woman he thinks he loves and the hotel submarine that is keeping them all alive.

Check out this intro video below featuring director Andrew Harmer on the Black Widow submarine they’re hoping to shoot on:

In 2011, Liam Garvo and James J. Heath formed Dresden Pictures to focus on producing feature film content with The Fitzroy being the first in a line up of several films they will be producing. Liam described the dark comedy as ‘.. a cross between Delicatessen and Fawlty Towers.’ Just in case you’re wondering, the film will be live action, with the opening titles the only thing that’s animated. James told me they’d be announcing casting info soon.

Here’s James, writer/director Andrew Harmer, and Liam at the Sci-Fi London’s Post-Apocolympic festival last weekend where they set up a stall to promote their film.

The Fitzroy team has launched the Kickstarter campaign on November 8 and so far has made it through the 10% barrier. But they still need to raise £60,000 in order to make the film and enter it into various film festivals. There are all kinds of rewards listed there, you could even be in the movie if you choose to. The films titles will be an animated cartoon and will explain how the world of The Fitzroy came to be, so if you send ’em a couple of photos of yourself, they will turn you into a toon featured in the title sequence! 😀

For those of you in London, there’s a celebratory shin-dig for The Fitzroy and it’s crowd funding campaign.

The film’s band and soundtrack producer – The Green Rock River Band will be performing a live set of ‘Doom Folk’, plus there’ll be giveaways, an exhibition, and special announcements. Oh and also a FREE BAR (not for long though, so get there early).

I wish I could attend but I live on the other side of the pond!

Now, both James and Andrew have agreed to do a special Q&A with me and FlixChatter’s readers.

So before you check out their project, do submit any question you have for the filmmaker in the comments section. Their answers will be posted here later this month!