Happy Friday folks! Time for a new trailer since I skipped last week.

From Oscar nominated Aussie director Bruce Beresford (Tender Mercies, Driving Miss Daisy), it’s a drama based on the autobiography by Li Cunxin. At the age of 11, Li was plucked from a poor Chinese village by Madame Mao’s cultural delegates and taken to Beijing to study ballet. In 1979, during a cultural exchange to Texas, he fell in love with an American woman. Two years later, he managed to defect and went on to perform as a principal dancer for the Houston Ballet and as a principal artist with the Australian Ballet. 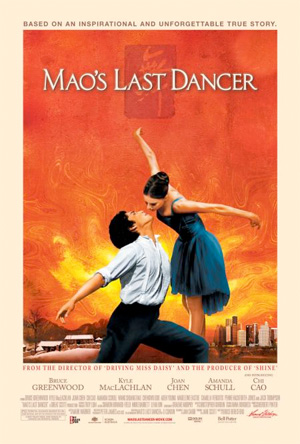 While I was browsing the Apple trailer site, the poster caught my attention because the color scheme reminded me of Gone with the Wind with its fiery red and yellow combination. I love how graceful and melancholic it looks. For a second I thought the male dancer was played by this hunky Korean actor Daniel Henney, but it’s actually Chinese ballet dancer Chi Cao in his debut film. It’s always tricky when you have a story about dancing, as the believability factor hinges on how the dance sequences are executed. Do you get an actor and train him to dance, or get a dancer and train him to act? Since they go with the latter, I hope he pulls off the emotional scenes.

Joan Chen as Li’s mother, Bruce Greenwood as the British dance instructor, and Kyle MacLachlan as Li’s attorney round up the cast. Stories of forbidden love always appeal to me, and Li’s story is certainly worth telling. Alas, most likely it’ll be a dvd viewing for me, as it’s only going to be out in limited release in the US starting August 20.

11 thoughts on “Conspicuous Trailer of the Week: Mao’s Last Dancer”