Gerard Butler movies don’t usually fly well with critics. Nonetheless, I was curious where this PLANE movie would land with me. I even forgot it happened on the same night as the Golden Globes, but y’know what, it ends up being well worth my time.

PLANE is the kind of movie that harkens back to 80s-90s action movies starring Schwarzenneger, Stallone, Bruce Willis, Kurt Russell, Harrison Ford, etc. where the action star gets to save the day despite the most improbable circumstances. Well, Gerard ‘Gerry’ Butler has carved out a sizable niche in the action genre since 300 and the ‘Has Fallen’ franchise since Olympus Has Fallen in 2013. It’s ironic that he can’t seem to get away from ‘fallen’ things, as Greenland might as well be called ‘Comet has Fallen’ and this one is, well, ‘Aircraft has Fallen.’

Directed by Jean-François Richet, the movie doesn’t waste much time before things go awry when the Singapore-Tokyo-bound plane encounters bad weather. The engines and radio malfunction as soon as the plane gets hit by lightning. Now, one doesn’t have to be an aviation enthusiast to know that a lightning strike doesn’t typically cause major damage to most modern planes, and that post 9/11, airline captains would never leave the cockpit to check on passengers. But hey, a great deal of suspension of disbelief is required for these types of movies. So pilot Brodie Torrance, along with his co-pilot Dele (Yoson An) is forced to make a risky landing on an unknown island. Borrowing a Malay proverb, it’s like escaping from a crocodile’s jaw and straight into a tiger’s mouth.

Now, I have to say my enjoyment of watching this movie is dampened quite a bit by the fact that the movie is so dark, especially during the entire turbulence and crash landing scenes. It would’ve been more suspenseful if I could at least see more than just the eyeballs of the actors! I asked the PR company afterward and she said the projector was not the issue, so it could be the case of terrible lighting/cinematography.

Thankfully, the second and third acts take place mostly outdoors but it still looks a bit too dark to me. In any case, the war-torn Southeast-Asian island where the plane lands is controlled by a separatist militia. They are basically terrorists as they see foreigners, even Christian missionaries, as nothing but dollar signs they exploit for ransom money. Once the passengers are out of the plane, there’s a sense of dread as it’s just a matter of hours before the scary bad guys find their location.

Now, adding complications to the mix is the fact that one of the passengers is a convicted murderer being extradited, Louis Gaspare (Mike Colter). Without his handler around, Brodie has to make a decision about whether he can trust Louis. At first, he acts like an ally, but we’re left wondering how long that would last.

I actually appreciate seeing Butler as the sensitive and emotional protagonist for a change, as Brodie is missing his daughter whom he’s supposed to spend New Year’s Eve with, and he genuinely cares for his passengers. The Scottish actor is a confirmed bachelor in real life but I appreciate he forgoes his flirty side here as Brodie is an absolute professional with all the pretty female flight attendants. Unlike his more reckless character in the ‘Has Fallen’ franchise, Brodie is even reluctant to kill the baddies if he doesn’t have to.

Colter, on the other hand, relishes being a fearless action hero and looks fantastic doing it! The scenes of Louis making good use of a sledgehammer got a loud reaction. I’ve loved Colter in the Luke Cage series and he’s such an imposing figure with undeniable charisma. He can be charming and terrifying in a matter of seconds, which is fun to watch when Louis and Brodie team up to take on the separatists. Hollywood, please give this guy an action franchise, pronto!!

I have to applaud the wise decision in making Butler’s character a Scot. I mean, he’s generally not great with accents, and his ethnicity isn’t really that important to the story anyway. I’m always glad to see a diverse cast and not just those playing the bad guys. In addition to Chinese-New Zealandaer Yoson An, we’ve got Mexican-American Daniella Pineda as a flight attendant, African-American Remi Adeleke as one of the mercenaries, and Japanese/Filipino-American Evan Dane Taylor as the separatists’ chief. Despite not being on the field, Tony Goldwyn delivers a pretty memorable performance as Scarsdale, a former Special Forces turned corporate crisis fixer tasked to avert the crisis. 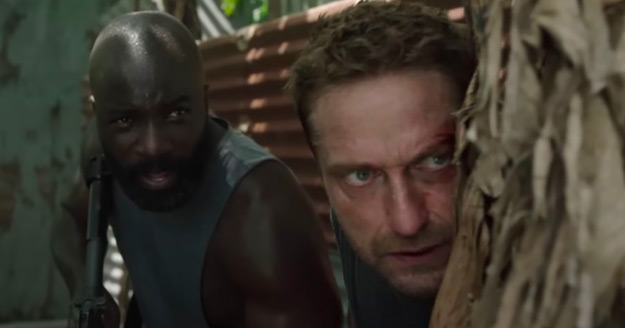 The third act of the search-and-rescue mission goes into full-throttle action mode as Brodie + the mercenaries deployed by Scarsdale go into battle with the separatists. One particular shoot-out sequence involving a highly-skilled marksman is quite bloody, but overall the violence isn’t overly gory.

Action fans would likely enjoy this old-school action thriller. Yes, it’s predictable and the plot is simplistic, but it delivers on its promise and sometimes that’s enough. I know going in that one can’t expect deep character development in a movie called Plane, so I’m not going to complain that the movie is devoid of that.

January movies could have been so much worse, so I’m glad to report that Plane is NOT terrible. In fact, it’s serviceable entertainment and at merely 1 hr and 47 minutes, it’s as efficient as it is thrilling. If this movie proves to be a box office hit, I actually don’t mind seeing another transportation-themed actioner featuring Butler/Colter duo again… last time I checked on IMDb, the title Ship is still available 😀

Have you seen PLANE? Well, what did you think?

12 thoughts on “PLANE (2023) Review: this Gerard Butler actioner swoops in to deliver a surprisingly enjoyable ride”