Ruth’s note: Thanks to FC’s contributor Cecilia Rusli for this review. This film is now available on DVD/Blu-ray. View more information on the production of this movie as well as the trailer.

…
It’s been a long time since I’ve last seen a Chinese movie at the cinema as I am getting less interested to see their martial arts movies all over again. When The Flowers of War played at the local cinemas in Indonesia, I heard good reviews about it and yes the fact that Christian Bale is one of the cast pretty much made me curious. This film tells the story of an American, John Miller (Christian Bale) who has to stay with school girls and prostitutes during attack and rape by Japanese army at Nanking in 1937.

The film with a combination of war, Asian army, and an American leading role that I remember pretty strong is The Last Samurai where I found the Japanese Ken Watanabe did a very good job with Tom Cruise. Now at The Flowers of War, Christian Bale succeeded in building a good emotion with the Chinese cast which consist of prostitutes and the students he met at the church. The conflict happens from the beginning of the film created a strong bond between the characters on the movie.
…
Watching The Flowers of War leaves me with mixed up emotions. I laughed at some of the hilarious scenes, and also weep a couple of times at the heartbreaking scenes. Director Zhang Yimou created these sadistic and heartless Japanese army very well that it was painful to see. Brutal and bloody actions have officially made this film not recommended for kids. Regardless of some of the silly and cheesy drama scenes, all that I felt is this emotional built up that starts from the very beginning all the way until the end of the movie as it’s wrapped beautifully. It’s not just strong at the dramatic part, I also enjoyed the war tactics with explosions and shotguns at the beginning of the movie.

Christian Bale managed to give the audience different perspective and emotions on his character throughout the film. The script surely supports it. Moreover, Bale shows that he could be paired perfectly with the Chinese actress Ni Ni for the romantic scenes and also with Tianyuan Huang for some hilarious conversations.

Paul Schneider who plays the role as John’s friend Terry did not really have much screen time in the movie. The character is plainly ordinary and he is just supporting Miller’s character as an American.

Personally I feel that The Flowers of War is worthy to be selected as China’s official submission to the Best Foreign Language Film category of the 84th Academy Awards 2012. It is a pretty brave film as it contains some controversies between Japanese, Chinese, and American but managed to bring a strong dramatic movie for the audience. Don’t watch it when you’re in a gloomy mood though, as this film will make you even more depressed.
…
– review by Cecilia Rusli
…

Has any of you seen this film? What do you think?

I just checked my Netflix queue and the next film scheduled to arrive is The House of Flying Daggers. I’m not much of a Kung Fu film fan but since someone told me it’s centered on a love story (love triangle no less) and that it looks amazingly beautiful, I’m intrigued.

On the same day I learned that Dager‘s acclaimed director Zhang Yimou’s first multi-lingual film (a mix of English and Chinese), 13 Flowers of Nanjing, has just begun principal photography. Yimou’s also known stateside for his work in Hero and Curse of the Golden Flower. This project was previously called Nanjing Heroes, which is based on Yan Geling’s novel The 13 Women of Nanjing. The subject matter alone is enough to get me to see this, but with Christian Bale starring, it naturally puts this on my most-anticipated list.

Here’s the synopsis from its press release via Collider:

13 Flowers of Nanjing is set in 1937 in Nanjing, China during Sino-Japanese war, where a few brave refugees find sanctuary in a Church compound.  The group, thrown together by the terrible chaos of war, risks their lives for the Church’s school children as they struggle to survive the violence and persecution brought on by the violent invasion of the city.  Through tremendous adversity, heroism presents itself among the least likely individuals as they bravely navigate their treacherous surroundings to try and save themselves and each other. 13 Flowers of Nanjing is a story of heroism and love: for those around you, for one’s family, and the love between an unlikely couple which fate brings together.

At first I thought Bale was going to portray John Rabe, the German businessman who sheltered more than 200,000 Chinese civilians during the Nanjing massacre, whose story recently been adapted to a movie with his name. But as this Telegram.com article reported, the Welsh actor will star as an American priest (John Magee) who presided over a Catholic church that shelters a group of prostitutes and young female students during the Japanese invasion. I’m thrilled that two of my all time favorite actors are portraying a man of God (Gerry Butler is portraying preacher Sam Childers in Machine Gun Preacher).

Fresh off all the buzz surrounding his performance as Dick Ecklund in The Fighter, he’s also reprising his role as Batman in The Dark Knight Rises. He’s the kind of guy you would admire for his body of work in every sense of the word, as you can see in the infographic courtesy of SlashFilm. 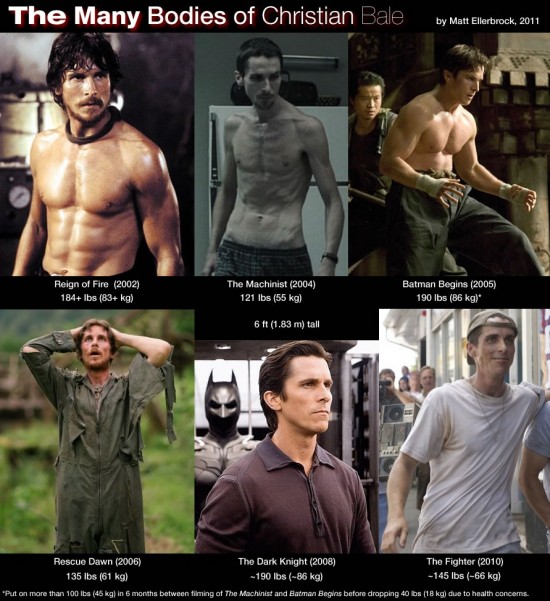 Apparently the multi-BAFTA award winner Yimou was impressed with Bale’s dedication and versatility. “I gave him the names of some books that he should read about the Nanjing massacre,” the director said. “When I went to see him, I saw those books were lying open on his table, and I was very touched.” Zhang also hoped that by casting a famous Hollywood actor like Bale will enhance the foreign appeal of the film. “We’ve made many, many Nanjing movies … but they are mostly like we’re talking to ourselves. A lot of young people in Western countries might not know about it.”

So far there’s no other casting news has been announced yet, I wonder if the popular Chinese actress Gong Li will get involved in this as she frequently collaborated with Yimou and the two also dated a back in the late 80s and early 90s. This’ll be Yimou’s biggest feature film with a budget of $90 million. It’s scheduled for release in 2012, which I’m guessing probably after Batman 3 opens on July 20th.

What do you think, folks? Would you watch this one?