Luck has the distinction of being Apple TV’s first animated feature, which is part of an exclusive deal with Skydance Animation. The movie aims for Pixar quality, especially since it’s got former Disney/Pixar’s chief creative officer John Lasseter as a producer. The story centers on Sam Greenfield, an 18-year-old orphaned girl who seems to always have bad luck following her wherever she goes. She’d describe herself as the unluckiest person in the world and she’s learned to live with it. The first 15-minute or so consists of various ‘unlucky’ scenarios that plague Sam’s life and how she takes it in stride as she finally lives on her own for the first time. 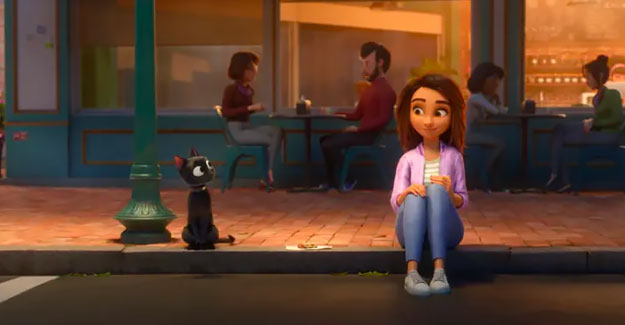 Voiced by Eva Noblezada, Sam is vivacious and kind to her friends, especially fellow orphan girl Hazel (Adelynn Spoon) who hopes to be adopted and find her forever family. One can’t help but feel for the protagonist and she is instantly likable, yet the movie takes quite a while to get going. One night, Sam shares her panini with a stray black cat on the street (why a self-described unlucky person would sit on a street pavement where a car could easily hit her I’ll never know). In the process, she finds a penny which somehow improves her luck significantly. The scenes where everything goes well for Sam, notably in the flower store where she works, are funny and sweet. But of course, it’s short-lived as she soon loses her lucky penny, which launches into an adventure of a lifetime that takes her to a fantastical place called the Land of Luck. 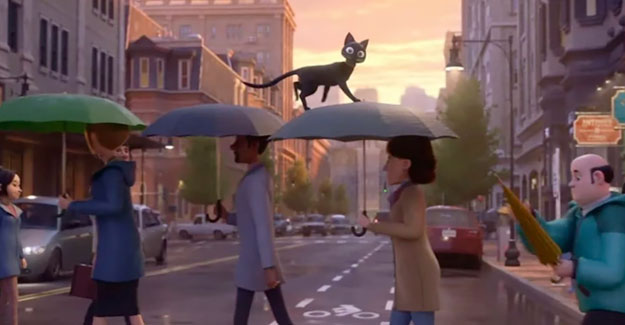 I think the idea itself is pretty original and clever and I was quite invested in Sam’s journey to retrieve the penny… that is until I wasn’t. What started out as an enchanting adventure into a magical land where leprechauns, a talking black cat named Bob, and other creatures exist soon become an overwrought scenario that becomes more and more convoluted. Bob is voiced by Simon Pegg with a Scottish accent even though the whole ‘luck’ mythology is Irish, what with the famous saying ‘luck of the Irish.’ The visuals of the magical land itself are stunning to look at, though everything looks more mechanical. It’s all very sleek and glossy instead of the more organic and earthy look of Cartoon Saloon’s The Secret of Kells and Wolfwalkers which are also steeped in Irish folklore. 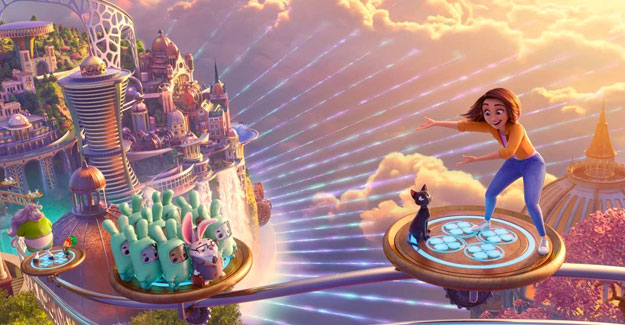 There have been a ton of great animated features of late, even Netflix has joined in on the fun with The Sea Beast, which tackles big themes wrapped in family-friendly entertainment. Luck aims for that as well, dealing with mature issues like abandonment, loneliness, and finding our place in the world, which is all well and good. The biggest issue I have with this movie is that it piles on too many ideas that are seemingly random, which becomes more of a distraction instead of fueling the protagonist’s story forward. It’s never a good thing when barely an hour into the movie I already feel a bit fatigued by the constant shenanigans and roadblocks that are happening. It doesn’t help matters that there’s incessant bantering between the characters, especially Sam and Bob, that grows tiresome as the novelty wears off. There’s little room to come up for air as the characters are in constant motion, it’s like we’re stuck in a dizzying ride that we can’t get out of.

The screenplay by Kiel Murray has a lot of potential but it’s just too overstuffed for its own good. There are some charming moments in the beginning, but it suffers a bloated middle that the movie never quite overcomes. Parts of the story remind me of Monsters, Inc. but this one feels like it’s trying too hard and the result is nowhere near as funny. This isn’t director Peggy Holmes‘ first time helming an animated feature, she’s directed Secret of the Wings for Disney, but surely this is her biggest credit to date. I think she did her best with the material given, but at 1 hour 45 minutes, the movie has serious pacing issues. The finale at the Land of Luck is pretty predictable, lacking a certain magical quality that I expected given the pedigree.

Now, the voice cast is pretty good all around. Noblezada sounds lovely and Pegg can be funny even when he’s being a curmudgeon, and there are big names like Jane Fonda as a dragon named Babe and Whoopi Goldberg as head of security. Fonda is quite fun here but it’s too bad that the usually-funny Whoopi is relegated to a serious, charmless character. Pixar’s regular voice actor John Ratzenberger also has a small part here, but the real scene stealer is Flula Borg as a flamboyant unicorn engineer named Jeff with his hilarious German accent.

I have to say that I enjoy the adventures in the human world a lot more than in the theme-park-like magical world. The cat chase scene is my absolute favorite of the entire movie, it’s so charming and inventive that none of the scenes inside the Land of Luck can match. The adoption storyline has a lot of heart, I was quite moved by it despite the heavy-handed approach. So overall, there is an endearing quality in Luck, but it could’ve been so much better overall. The way it is now, I’m glad I saw it but it’s not something I’m keen on watching again, so it falls short of being an animated classic.

Have you seen LUCK? I’d love to hear what you think!