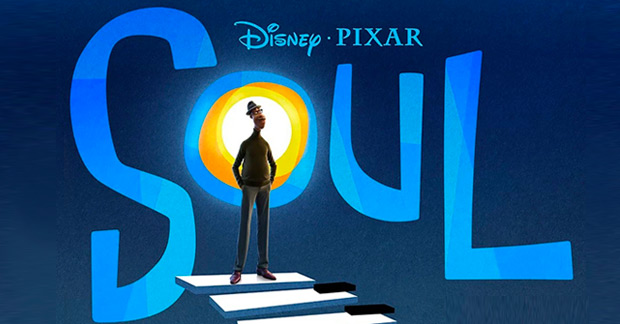 It’s been a while since I actually reviewed a Pixar movie. I haven’t seen COCO and while I did see Onward last Spring, I didn’t get a chance to review it. I’ve always liked movies about music and there is something so fun about SOUL that I watched it a day after its release on Disney+.

I love that Disney’s animated opening logo montage uses the music played by Joe Gardner’s (Jamie Foxx) middle-school students in his music class. It’s a fun and clever way to introduce the character in his environments. Now, it’s a special day for Joe as he’s been hired full time by the school as a music teacher. Instead of being ecstatic however, Joe actually feels down as his dream has always been to be a jazz musician. His tailor-shop-owner mother Libba (Phylicia Rashad) pressures him to accept the job as she wants him to be financially secure. As luck would have it, thanks to his former student, Joe suddenly got a chance to play in one of his favorite jazz quartet. He’s got oh-so-close to finally living his lifelong dream that night when poof! he falls into a manhole. 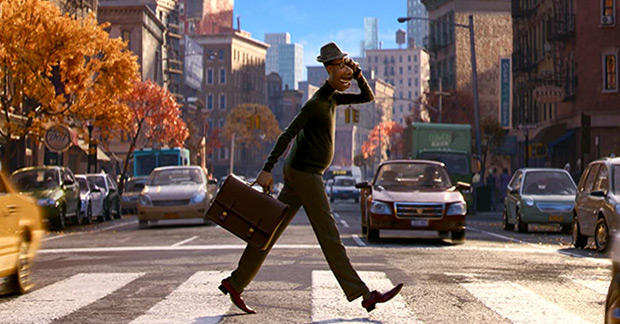 Pixar has always been great at defining its characters and in SOUL it’s no different. Joe is all about music… it’s in his blood, body and soul… as he says, ‘music is all I think about, from the moment I wake up in the morning until I fall asleep at night.’ So when I saw his dream slipped away from him just as he came SO close to realizing it, I couldn’t help but gasped (even though that scene is right there in the trailer).  Most of the movie happens in the afterlife, starting with Joe’s soul protesting the fact that he’s one of the poor souls heading towards the Great Beyond. Leave it to Pixar to make something quite traumatizing like death and make it cute and mirthful as Joe’s soul tries to escape the long lineup. He ends up in the Great Before, as in the pre-mortal existence before the soul enters a body. It’s classic Pixar that the visuals in each world is just spectacular to behold… gritty New York City, the dark, ominous-looking steps going to the afterlife (complete with the accountant counting every single soul), then the colorful, fluffy world of the Great Before, each one is so imaginative and wonderfully-constructed.

But the beauty of Pixar Studios isn’t just the amazing, awe-inspiring animation techniques, but the genius is in the brilliantly-witty writing, thanks to Pete Docter who co-wrote the script with Mike Jones and Kemp Powers. Somehow they could just get into the psyche of what it is to be human and can create such a family-friendly movie that actually gives you a lot of food for thought for adults. It’s when Joe meets 22 (Tina Fey), a cynical soul who has remained in the Great Before universe for a very long time and feels she’s not worthy to live on earth that most of the philosophical discussions happen. But of course, all the deep, meaningful existential conversations are delivered via one hilarious moment after another.

The soul-body switcheroo involving a therapy cat creates plenty of slapstick humor, and at times perhaps I fear that it’d get to be too much. Thankfully the writers never loses sight of what the movie is about and all the humor fits into the narrative they’re telling. There are so many great moments in this movie but I think the bit when both Joe + 22 are on earth might be my favorites. I love the bit at the barber shop… even the hilarity in that scene consist of deep moments where Joe realizes that perhaps he’s become too self-absorbed and not interested in other people’s lives. It’s these poignant scenes that Pixar is so good at making, filled with life-lessons and wisdom without getting too heavy-handed.

Of course all the characters are delightful. I love all the soul counselors, all named Jerry, voiced by Richard Ayoade, Alice Braga, Wes Studi; and the droll accountant is voiced by Rachel House (whom I love in Taika Waititi movies like Hunt of the Wilderpeople and Thor Ragnarok). As I watch Graham Norton show frequently, it’s fun to hear his voice here which I recognize right away. It’s inspired casting to have him play the character Moonwind who helps lost souls get over their obsessions. Lovely to hear Angela Bassett‘s smooth voice as the sassy Dorothea Williams and that metaphor she told Joe in the end is memorable. Hey I’d love to see a spinoff of her character as a Jazz musician/sax player. 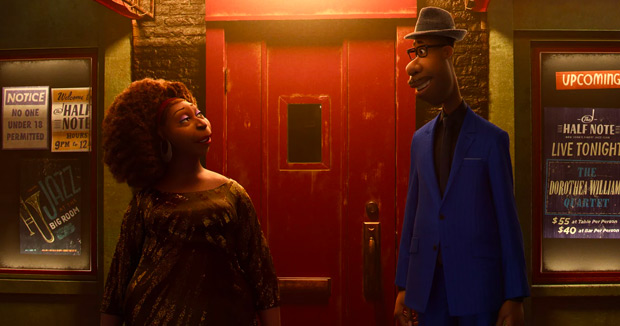 Of course, the fact that the protagonist loves Jazz, the music is absolutely fantastic. I love that the fingers playing the piano actually play the keys correctly, courtesy of real-life musician, Jon Batiste, who composed and also performed some of the songs. The movie also included musicians Herbie Hancock, Daveed Diggs and Ahmir-Khalib Thompson aka Questlove. I actually wish Jamie Foxx would actually sing in this movie as he too has a wonderful voice!

Per IMDb, Docter revealed that once the filmmakers settled on the main character being a jazz musician, they chose to make the character African-American. So Joe is the first black main protagonist of a Pixar movie that serves as a fitting tribute to Jazz music as well. What a brilliant title too, a soulful film both thematically and in terms of the music genre. I’m glad Pixar once again comes up with a fresh concept. This one is perhaps most similar to Inside Out which also gives an imaginative insight into humanity in the most delightful way. It’s fitting that it’s released on Christmas day, as it celebrates the humanity of us all and what a gift life truly is, even in a year like 2020.

Have you seen SOUL? Well, what did you think?

Leave a Reply to Often Off Topic Cancel reply