Hello everyone!! My picks of favorite movies of the year is here! Per FlixChatter tradition, I usually wait until mid January to post the obligatory Top 10 Best list.

I always have to preface this kind of post that there are still plenty of 2020 movies I have not seen yet: Minari, Da 5 Bloods, The Assistant, Miss Juneteenth, The Forty-Year-Old Version, Sound of Metal, Promising Young Woman, The Trial of the Chicago 7, Ma Rainey’s Black Bottom, etc. which might alter my current Top 10. All the films were released in 2020, though I might have watched a couple of them in 2021. I got more screeners this year than ever before, but somehow I still don’t do a good job of logging just how many films I’ve watched. So for sure my goal in 2021 would be to better log my movie-watching on Letterboxd.

It goes without saying of course, that everyone’s list is personal… my criteria is that a film makes a lasting impression on me, combining the virtue of being entertaining, deeply-moving, thought-provoking and indelible. Replay-ability is a factor I take into consideration as well, though I don’t necessarily want to rewatch every single film on my list. Well without further ado, here we go…

1. Birds of Prey (and the Fantabulous Emancipation of One Harley Quinn)

It took me a long time to finally watch this movie. Somehow I wasn’t wowed by the trailer and took me a while to overcome my silly prejudice about it. Of course, by the time I’m done watching it, I was like, ‘what took me so long?! That was awesome!!’ Margot Robbie is phenomenal as Harley Quinn, though to be honest I wasn’t too keen on her in Suicide Squad, but that movie was utterly rubbish. Props to Robbie, director Cathy Yan and writer Christina Hodson for creating Harley as a crazy, unhinged character but yet still vulnerable that you can’t help but empathize for. Per my friend Vitali’s review, she spent three years developing the project under her own production company and the result is one of the best DCEU movies to date. The ensemble cast is fantastic – Ewan McGregor is quite fun as the villain, but I’m really impressed by Jurnee Smollett-Bell and Ella Jay Basco.

This one is still fresh in my mind as I just reviewed it. I didn’t even realize that Onward was released the same year. Though I enjoyed that one, it was far more frivolous compared to this one. I love so many things about this movie… the delightful characters, the beautiful visuals, the music, but most of all, the way Pixar gives an imaginative insight into humanity in the most delightful way. Jamie Foxx and Tina Fey provide great voice work here, but I really love hearing Angela Bassett‘s smooth voice as the sassy Dorothea Williams, one of those great Pixar characters I’d love to see a spinoff on.

I’m glad I always waited to make my top 10 until mid January, as there’s always a film or two from the year prior that I didn’t get to see until recently. Well, this year, that film is this documentary about the disappearance of Washington Post journalist Jamal Khashoggi when he entered the Saudi Arabia’s consulate in Istanbul. Well we have since know that he was brutally murdered, while his fiancée was waiting for him outside the embassy. Gripping, chilling, heartbreaking… it’s especially sad that no streaming giant made a bid for this film, most notably Amazon, given Jeff Bezos was actually featured in the film, shown as lending his support to Khashoggi’s fiancée Hatice Cengiz at his memorial. But obviously money talks as Netflix + Amazon are both doing business with the Saudis. Well, I hope you’d give this outstanding film by Bryan Fogel, who risked his life making this film, exposing a global cover-up perpetrated by the very country Khashoggi loved. The film played like a dark thriller, except more terrifying as it actually happened.

Dev Patel has become one of my favorite actors. He’s truly come a long way since starring in the Oscar-winning Slumdog Millionaire in 2008. I know people were all enamored with his mane in LION, which shows how Patel has grown to be a dishy hunk. But he’s also proven to be a versatile and talented actor. I’m glad he got a chance to play a titular literary character in this delightful adaptation. Director Armando Iannucci created a fresh take on a classic with a gleeful adventurous spirit, full of colorful adventure as well as heartbreaking poignancy. I really can’t wait to see Patel tackle another iconic literary character who’s typically played by a Caucasian actor, The Green Knight. Hope that one gets released soon! 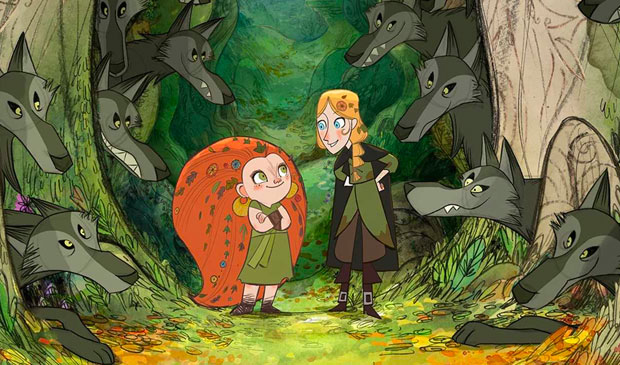 I’ve been a fan of Tom Moore‘s work for a while. The first Cartoon Saloon’s movie I saw was The Secret of Kells, then The Song of the Sea. This one is the third movie of Moore’s Irish Folklore Trilogy and it could very well be my favorite! It focuses on a young apprentice hunter Robyn (Honor Kneafsey) and her father (Sean Bean) journey to Ireland to help wipe out the last wolf pack. But everything is turned upside down when she befriends a free-spirited girl Mebh (Eva Whittaker) who can talk to wolves. Mebh is so adorable with her huge eyes and even bigger mane, you just can’t take your eyes off her! This movie is simply magical… there’s a mesmerizing quality in its stunning, ethereal animation style, where each frame is rendered in such impeccable details. But it’s not just hollow beauty, but it’s also a deep, touching story celebrating unity and friendship. I think this movie also feels timeless, one that both kids and adults can enjoy for years to come.

I’m waiting to post my full review of this until close to its release in mid February. If you get a chance to see this on the big screen, do so as the visuals is really quite stunning. A beautiful piece of Americana as a woman embark on a journey through the American West… seen through the eyes of an immigrant. Like Chloe Zhao‘s previous film The Rider, it’s a deeply immersive and mesmerizing film. Frances McDormand is wonderful in a quiet, reflective role and she’s really believable as a modern-day nomad. Zhao mixes award-winning actors (David Strathairn plays a supporting role) with non-actors in a pretty seamless way. In an era where there’s so much constant noise online, it’s so refreshing to watch a  quiet film that allows you to ruminate on the themes presented on screen. 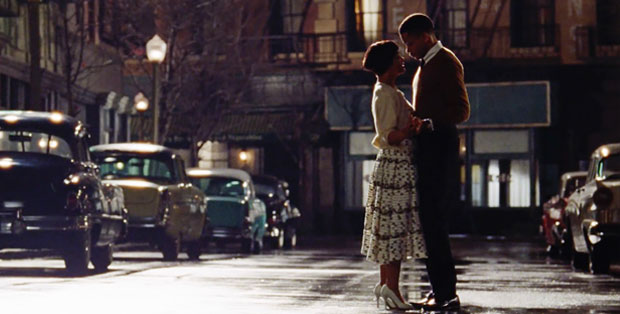 Confession: After I saw this film, I honestly didn’t think it’d end up on my best-of-the-year list. Even though I find it beautiful and swoon-worthy, but there’s something wanting, which I’ll go into more details in my review (currently still in my draft folder). At the same time, as a fan of romance dramas, there’s a lot to like and even admire in this film… Tessa Thompson is simply luminous as a romantic lead and newcomer Nnamdi Asomugha is wonderful in the title role. I wish Hollywood makes more romance films like this one–not a rom-com or tragic romance, but an escapist love story that’s still grounded in the reality of its time.

8. News Of The World 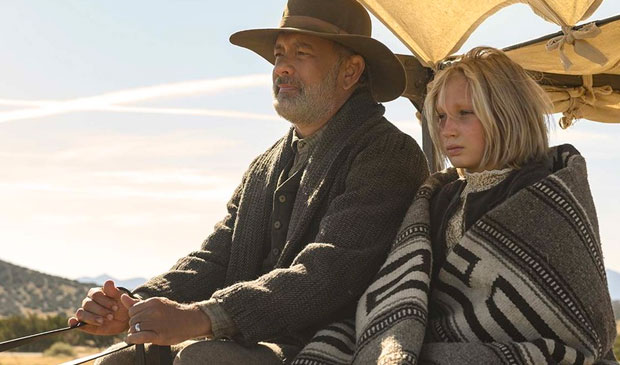 There are few actors working today as reliable as Tom Hanks. I hadn’t heard of this film before I was provided with a screener. It turns out to be Hanks’ first Western, which is surprising to me as he seems to be a fan of the genre (I remember hearing him tell a story of Clint Eastwood treating his actors like horses on many talk shows, thanks to his experience doing a Western). This is another winning collaboration between him and Paul Greengrass since Captain Phillips, who’s also never done a Western before. I was also incredibly impressed by young German actress Helena Zengel who was able to match Hanks’ intensity here, which is quite a feat considering the film consist mostly just the two of them.

One of the most notable comeback in recent memory… though it’s actually only my second time watching a Sophia Loren‘s movie. This movie was directed by Loren’s own son, Edoardo Ponti, a remake of a French film Madame Rosa (1977). Loren plays an woman running a daycare service living in a seaside town of Bari in Southern Italy. She strikes an unlikely friendship with a Senegalese boy Momo (Ibrahima Gueye) who she reluctantly took in. I have my review in the draft folder, so I won’t say much more, but it’s easily one of my favorite films I saw in 2020.

It’s too bad so few people talked about this movie, as it’s one of the most memorable historical drama in recent memory. Superbly directed by Agnieszka Holland from a script by Andrea Chalupa, whose own grandfather suffered the Holodomor, the man-made famine-genocide in Ukraine ordered by Stalin in early 1930s that killed many Ukranians. I’ve loved James Norton‘s work in many British period dramas, so I was thrilled to see him in a lead role and he’s more than capable portraying real life Welsh journalist Gareth Jones. It’s eerie that Jones suffered similar fate as Jamal Khashoggi for bravely exposed the truth, which put him in direct opposition with a powerful government leader.

There’s no ‘science’ in picking a top 10 list… mostly just gut instinct and personal preference. Some of the movies here I like very, very much and I have actually enjoyed more than the ones on my main top 10. Some I appreciate but I don’t really feel like watching it again.