I guess it’s no longer a surprise that Netflix has become such a studio behemoth, but now I’ve found myself anticipating Netflix movies as much as those from other studios. I mean it’s free anyway since I have the subscription and with movie theaters closed, obviously more studios have decided to release their movies on streaming.

Well, thanks to Wiki, there’s quite a list of movies coming in 2021, but it’s only January so I’m just focusing on the ones coming out in the next two months. I have blogged about The Dig, starring Carey Mulligan and Ralph Fiennes, so I’m not going to mention it again here. Action, crime thrillers, emotional drama, comedy, romance… there are definitely something for everyone here. 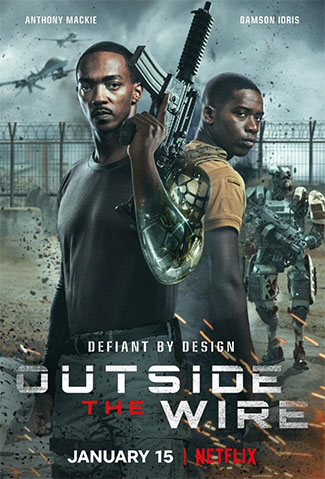 In the near future, a drone pilot sent into a war zone finds himself paired with a top-secret android officer on a mission to stop a nuclear attack.

My first thought when I first saw this was… ‘So Falcon now becomes even more powerful than Captain America!’ He won’t be needing the shield as as a cyborg. Not clear how becomes an android officer, but he obviously still looks and sound very human and the character tells the drone pilot that he still feels more than you think. Well, it looks intriguing enough, and I like Anthony Mackie so this should be worth a look. The movie also stars British actor Damson Idris and Danish actor Pilou Asbæk, and directed by Swedish director Mikael Håfström (Escape Plan, The Rite).

The epic journey of a poor Indian driver who must use his wit and cunning to break free from servitude to his rich masters and rise to the top of the heap.

This one is based on a debut novel of the same name by Aravind Adiga, an Indian-Australian writer and journalist, which won the 2008 Man Booker Prize. I’m intrigued partly by the director, Ramin Bahrani who made the excellent drama 99 Homes. This one also deals with a similar theme of a down-on-his-luck person rising up to power, escaping from the life he was born to. It looks more like a dark comedy than a heavy crime drama, starring Adarsh Gourav, Rajkumar Rao and Priyanka Chopra-Jonas. Queen’s I Want to Break Free is quite an interesting choice that’s somehow perfect for the trailer.

Based on the best-selling book of the same name, the film tells the story of Sam Bloom a young mother whose world is turned upside down after a shocking, near-fatal accident leaves her paralyzed. Sam’s husband, her three young boys and her mother are struggling to adjust to their new situation when an unlikely ally enters their world in the form of an injured baby magpie they name Penguin.

This one is also based on a novel AND a real life story. Honestly, I’m usually not too keen on sad movies and this one definitely looks like a tearjerker. After watching the trailer though, I’m curious enough to give it a shot. I haven’t seen Naomi Watts in anything lately, though it seems like I’ve seen her in similar role like this one. Looks like this one is an Australian production, with an Aussie filmmaker and mostly actors from Down Under: Watts, Jacki Weaver and Rachel House who’s from New Zealand. Andrew Lincoln is British though, nice to see him take a break from all the Walking Dead projects. I’ll be sure to have tissues handy when I watch this one.

What do you think of this lineup? Is there one you’re looking forward to seeing?