When I first saw the trailer for Luca, I was immediately excited for it. I mean, I’m usually excited for Pixar movies and the seaside Italian Riviera setting is extra appealing to me as one of my fave holiday memories was at Sorento & Cinque Terre.

Directed by Enrico Casarosa (who did the La Luna short film) in his feature-length directorial debut, the story was apparently inspired by his own youthful experience in his native Italy. As most of you have seen in the promos/trailers, the two boys are sea monsters who long to live above the sea… kind of like Little Mermaid with boys & sans romance. Initially, some LGBT groups thought this is similar to Call Me By Your Name that’s also set in Italy and involves two boys falling in love. However, the filmmaker said the relationship depicted here is a platonic one set before they hit puberty. 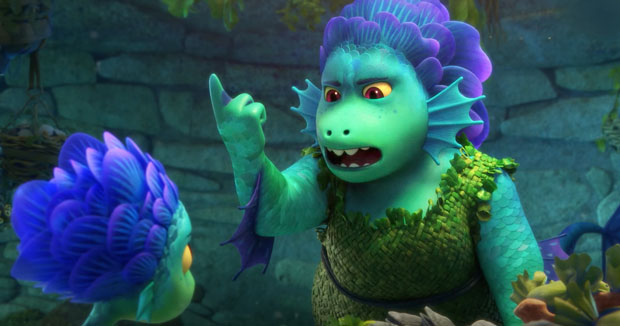 I like Jacob Tremblay’s voice work here as the title role and Luca is instantly likable from the start. There’s a tentative curiosity and sense of wonder when he first glimpse a few human items that falls from boats, which is delightful to watch. Of course, just like Little Mermaid‘s Ariel, Luca is constantly told that life above water is dangerous and humans are evil, especially by his overprotective mom (Maya Rudolph). Regardless, the young boy is still fascinated by the human world and his dreams of visiting the village finally comes true when he meets Alberto (Jack Dylan Grazer), a fellow sea monster who has apparently lived Portorosso. In contrast to Luca, Alberto is much more upbeat and confident, a bit of a trouble maker type who seem to know so much about life above water.

My favorite moments is when the two bond over their love for Vespa and their friendship flourish over building scooter and using them to ‘fly’ over cliffs. I can’t help but be swept up by their zest for life and get nostalgic of my own favorite holiday as a kid. Luca and Alberto’s real adventure begin when they meet a human girl Giulia (Emma Berman) and end up signing up for the town’s triathlon to win the Portorosso Cup. The main ‘villain’ is Ercole, the local town bully and undefeated race champion who grows increasingly suspicious of the two boys. Voiced by Italian comedian Saverio Raimondo, Ercole is more irritating than menacing. It’s interesting how few Italian voice talents there are in this movie, Sacha Baron Cohen and Jim Gaffigan have supporting roles as uncle Ugo and Giulia’s dad Lorenzo, respectively.

I feel like Luca is Pixar-lite…. Visually stunning with a charming story but lacks the depth and emotional resonance I expect from the studio. After the Oscar-winning, indelibly thought-provoking Soul, it seems quite a step down narratively. I’m not saying it’s a weak movie per se, I just expected more from the Pixar team who have done so many excellent animated films for both kids and adults alike. This one seems to be geared more for younger, less demanding viewers as it doesn’t have the same level of suspense, wit or originality like Pixar’s earlier efforts. I actually rewatched Finding Nemo after watching Luca, which remains far superior and has that ‘timeless’ quality as other other Pixar greats like Toy Story, Monsters Inc, etc. Now, Luca does have a timely message of belonging and acceptance of those different from you, which is fitting given its release during Pride month, but it’s not exactly groundbreaking and I feel like overcoming prejudice/stereotype is a topic that’s been covered before to better effect, i.e. Zootopia.

That said, what this movie does have in abundance is the high energy, vibrancy and warmth of genuine friendship. The filmmaker said he’s inspired by Federico Fellini’s work (there’s even a photo of Marcello Mastroianni attached in one of Alberto’s scooter), and there’s a touch of Studio Ghibli as well. One can always rely on Pixar to deliver rich, glorious visuals and whether below or above water, the colors are absolutely stunning. It certainly makes me yearn to be transported to the Italian seaside town pronto!! So even a lesser Pixar movie is still well worth your time.

Have you seen LUCA? I’d love to hear what you think!