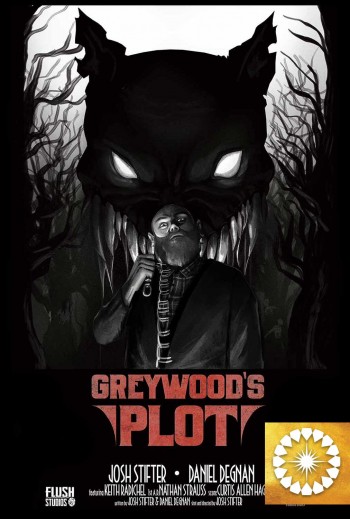 Greywood’s Plot, directed by MN-based director Josh Stifter (whom Ruth interviewed for his film The Good Exorcist), is a fantastically fun and funky horror comedy. Shot in black and black and white, it’s a throwback to old late night comedy shows.

The movie follows two lifelong friends who receive a mysterious VHS tape containing some footage of a vampire-type animal. They decide to go on and adventure into the woods to investigate the validity of the tape and in the process hope to make a documentary about it. The journey becomes much more than they expected as the terrifying truth is uncovered.

This full-length horror-comedy film made almost entirely by Stifter and his friends. It also stars his longtime collaborator Daniel Degnan who was in The Good Exorcist. Josh along with directing, also served as the co-writer and producer, while Nathan Strauss was the assistant director, executive producer and special effects artist and Keith Radichel rounded out the team as the films antagonist. Shot in Detroit lakes in a friend’s family’s small hunting shack the film is 100% Minnesota made. Even the extras were residents of Detroit lakes, serving as tree zombies.

Josh has been in the movie business for years, working with both Kevin Smith and Robert Rodriguez. He has a background in special effects which I think adds to the really playful and imaginative kind of horror comedy he makes. I also really appreciate the way he incorporated the surrounding woods and fields of Detroit Lakes. It would have been easy enough to keep the film contained in the shack but by expanding the films location it creates a much more immersive environment.

The Truth About Marriage (Documentary)

This documentary by filmmaker Roger Nygard (“Trekkies”) follows three not-so-ordinary couples to see how things turned out several years after the honeymoon. The film presents challenging ideas about relationships, as it answers the question: Why is marriage so hard for people?

Engaging and entertaining examination by veteran documentary filmmaker, Roger Nygard, into the complicated subject of marriage. As the saying goes, everyone’s got an opinion! And they are insightful and, sometimes, humorous. I liked the fact that there was a mix of a vast variety of “experts,” along with a variety of real life couples—some that were in untraditional arrangements. It’s another great film by him that’s a fantastic conversation starter. The film examines the history of marriage, how it’s evolved, and what we expect from it now. In the end, it’s up to us to decide: what is it’s purpose?

A feature-length documentary about the city dump in Yellowknife, Canada. In Yellowknife, the remote capitol of the Northwest Territories, the town dump is the city’s most popular and notorious manmade attraction, mined by a colorful community of thrifty locals. But the new city administration is determined to see it tamed, and the battle for Yellowknife’s identity is on.

An “A” for effort. This film is a unique peek into the salvage subculture of a small town in Yellowknife, Canada, which has a history of mining. There was great use of historical footage and stills. I would have like to seen more. There was an interesting cast of characters; however, maybe too many.

I am interested in the themes of re-use, re-purpose, recycling, minimum waste, environmental impact, and dumpster diving for food. It also touched on the issues of community interest versus politics coupled with the ever-increasing issue of gentrification. This film was trying to do a lot, but could have been cut back a little. Maybe even been a short. I really did appreciate it.