Denis Villeneuve’s SICARIO was one of the best films of 2015 and one of my favorites that year. It was well received by many movie critics, but it wasn’t a huge box office hit, so I didn’t expect or wanted to see a sequel. But these days Hollywood studios will try to turn ANY movie into a franchise and now part 2 of the hit man saga has been unleash to multiplexes.

The story kicks off with terrorist bombings, including one at a major convenient store in the heartland of America. Special agent Matt Gravers (Josh Brolin) has been summon by his boss Cynthia Foards (Catherine Keener) to find out who’s responsible for the bombings. With the blessing from the Secretary of Defense James Riley (Matthew Modine), Gravers was given a mission to do whatever it takes to get a payback for the bombings. 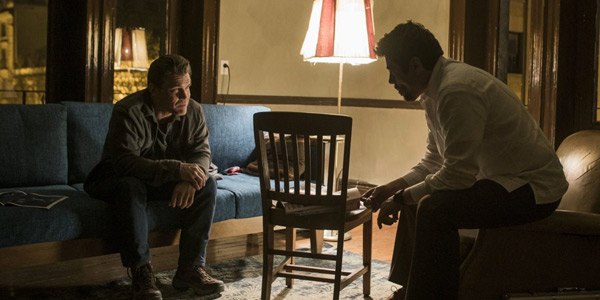 After interrogating a Somalian pirate, he found out that the drug cartels in Mexico are smuggling terrorists through southern border of Texas. With a help of his trusted assassin Alejandro (Benicio Del Toro), they devised a plan to kidnap a daughter of one of the big drug cartels and made it look like it’s another cartel who did it. Their goal is to start a war between the cartels, hoping they would all kill each other and wouldn’t be able to smuggle people to the United States. The victim is teenager named Isabel Reyes (Isabela Moner), whose father happens to be the biggest drug lord in Mexico. Once Graves and his men took Isabel, things went south fast and Alejandro must use skills to protect Isabel from danger.

With Villeneuve being busy with other projects, stepping into the director’s chair this time is Stefano Sollima, whose previous projects were mostly TV shows in Italy. I thought he did a decent job by following Villeneuve’s template, in fact I think most people would think this film was directed by Villeneuve if they didn’t know a new director was hired for the job. The look and feel were no different from the last film. There’s nothing wrong with following the previous director’s style but for me, if a new director takes over a franchise, I expect to see that person to bring in their own creative vision. Sollima did stage a pretty impressive action sequence in a desert where Graves and his men got ambushed.

Taylor Sheridan’s script is solid but not as good as the first one. Here he tackled several political subjects that are relevant to our real-world issues such as immigration debate, terrorism and politics bickering. But I thought with all those complex ideas he came up with, they just masked a very thin plot. If you’ve seen the trailers of this film, you pretty much know the whole story and that’s pretty disappointing to me. There were opportunities to make this one even compelling than the first film, but the story ended way too fast. I understand they’re planning a trilogy, so hopefully the third film will give us better story.

Performances were pretty decent all around, Brolin and Del Toro looked very comfortable in their respective roles and some of the young actors were pretty good. I thought Keener’s and Modine’s character were kind of wasted, they didn’t really have much to do and could’ve been played by unknown actors.

I was looking forward to this sequel and was a disappointed, mostly with the script. I think they missed an opportunity to make this one as good or better than the last film. Still a solid thriller and fans of the first film should check it out.

So have you seen Sicario: Day of the Soldado? Well, what did you think?

7 thoughts on “FlixChatter Review: SICARIO: DAY OF THE SOLDADO (2018)”