When I saw the trailer for this indie film, I was immediately intrigued! Firstly, I LOVE Parker Posey AND James Frain, and the premise sounds ripe for an offbeat comedy. 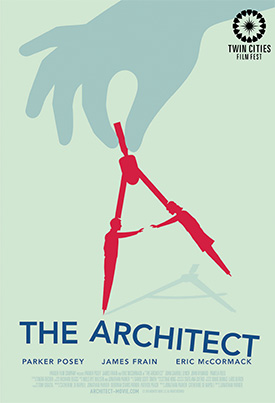 When a couple sets out to build their dream house, they enlist the services of an uncompromising modernist architect, who proceeds to build HIS dream house instead of theirs. Parker Posey and Eric McCormack played the affluent suburban couple Drew and Colin and James Frain plays the title role, Miles Moss.

Billed as a comedy, it’s not quite a slapstick in style but more about amusing situations and dialog. I love Parker Posey and she’s her usual fun, quirky self here. The story does have some darker moments, especially towards the end. If you’re watching this movie as you’re thinking about building a home, it’d certainly make you more cautious about hiring your next architect  😉 I think the funniest moment is when the couple AND their builder Conway (John Carroll Lynch) saw the model of their house for the first time at Miles’ office. Their expressions, especially Conway’s, is hilarious!

I don’t think the film paints architects in a bad light, it’s more about an overly-ambitious man who happens to be an architect, not necessarily a commentary about the profession. I do think it made for an interesting commentary about a privileged suburban life set in a gloriously scenic Seattle, WA area. It’s another film that practically doubles as a tourism video of the region it’s filmed in. True to its title, it also features some very interesting architecture, including the house their building. But I think the most impressive architectural style is Miles’ architecture studio, it’s so strange but beautiful at the same time.

Check out my Q&A below with filmmaker Jonathan Parker whose work include Bartleby, The Californians, and (Untitled).

1. I read in an article in Conversations.org that you had an interesting path to becoming a filmmaker from being a musician for years, and that you grew up in an artistic family. Would you share a bit about that and what inspires you to be a filmmaker?

I was playing in a band in the 80s and we made a couple of self-directed music videos that did better than the band was doing. I felt I needed to put the pictures with the music so I shifted from songwriting to screenwriting. Yes, I come from an artistic family. My mom is an artist and my dad was a musician, among other things. My mother founded the Museum of Craft and Folk Art in San Francisco, which closed a couple of years ago after a 30-year run.

2. The Architect isn’t the first film you did that deals with the world of art and design (i.e. (Untitled)). How did you (and or your collaborator Catherine DiNapoli) come across the idea for this film?

I had the idea of an architect who considers himself a visionary genius, without any evidence of that, and without any thought of serving a client. The story deals with the art vs. commerce theme that I’ve used in all my films, in some fashion. Meanwhile, Catherine, my-co-writer, was suffering through a relationship that had the same dynamic as Parker’s and Eric’s characters, so we used that.

3. There are quite a lot of architectural jargons and quotes from famous architects. Did you consult many real architects for this movie?

Yes, we consulted a few architects and I did a lot of research.

4. I really like the trio of cast. Both Parker Posey and Eric McCormack are such great comedians and I’m a big fan of James Frain’s work as an excellent character actor. Would you talk about the casting process, especially how you come to cast Frain as the architect?

Both Eric McCormack and James Frain came to our attention from the casting director. Parker and I have a mutual friend, who helped facilitate our meeting. I agree the three of them had great chemistry together.

5. The scenery around Seattle Washington is absolutely stunning. How did you end up choosing that particular area for your film?

We came to Washington for the tax credit and also received a grant from Snohomish County, where most of the film was shot. When we got there, I was struck by the physical beauty of the area and decided to feature it.

6. I have to ask how Lars Ulrich is one of the associate producers, did you know him from your days as a musician?

Lars reached out to me after he saw (UNTITLED) and we’ve been friends ever since. We both live in Marin County. He was helping me produce another movie before THE ARCHITECT, which we put on hold and are now working on again.

7. Lastly, have you shown the film to some architects? I’m curious as to their reactions to the title character Miles Moss.

Many architects have seen the film. Most really like it. Some feel I’ve set the profession back fifty years. Thankful to have that power! I could have created a more realistic architect character who is congenial, responsive and service oriented, but it may not have been very funny.

Check out some of the Minnesota-connected films playing this year

…
We’ll have another interview post coming soon!
Stay tuned for my Q&A with the director and producer of MN-made horror film Lake Runs Red!
…