There’s no shortage of great documentaries at TCFF! Today we’ve got a trio of reviews, thanks to FC contributor Sarah Johnson, my awesome reviewing partner during the film fest. Check out her bio page here, she’s a MN-based freelance writer who also writes for City Pages.

‘In Search Of America’ Review

Haven’t gotten enough of the presidential campaign over the past year? Throughout In Search of America, Marc Kornblatt, a former elementary school teacher from Wisconsin, crisscrosses the United States asking people from all walks of life about the issues of the day.

In one scene, Jonathan Katz, a professor of physics at Washington University, says, “Unless someone is a criminal or a terrorist, we should welcome immigrants.” In another scene, Heather Creighton from Toomsuba, Mississippi says, “I try to avoid politics and express what I believe in, which is the good Lord above.” As the camera pans out, you can see she is sitting under a Confederate flag. “It’s not a bad flag…I don’t know why everyone thinks it is?” She wonders.

So this documentary definitely has a point of view but the more I watched it and listened to the people being interviewed the more I felt like it was not about what political party you belong to or where you live, it was just a very human portrait of people struggling along in this country as best they can. “My father was in the military so I grew up overseas,” said Joanne VanDeusen. “I wish every American could have the opportunity to travel outside of the United States and meet the real people of the world.”

A quote from Edith Neimark, a diminutive white haired lady from South Brunswick, New Jersey, summed up the angst of many Americans when she gave her opinion on the bloodshed around the world. “Kill someone because you don’t like them? What’s that going to solve? But how do you stop it? I have no idea.” “As we say in the Badger State,” Kornblatt opines near the end of the movie, “Forward.” What other choice do we have?

‘Beyond The Thrill’ Review

Mixed with creative camera work and a frank discussion about what draws them to such a risky endeavor, “Beyond the Thrill” is an intriguing look at the world of competitive skydiving. Director Jason Schumacher (some Twin Cities Film Fest regulars may remember him from winning the Short Film Audience Award for his Sad Clown in 2014) finds some beautiful scenery as a backdrop to showcase a four person team at terminal velocity.

“That feeling in your stomach after you jump…I was kind of afraid of it but I loved it,” says one skydiver. “You could be a doctor or you could be a garbageman…it doesn’t mean much at the drop zone,” says another. Schumacher does a good job highlighting some of the work the team does (in one scene they are rolling around on skateboards to practice their routines) and also interviews United States Parachute Association Regional Judge Jon Goswitz on how each team gains or loses points for completed formations. 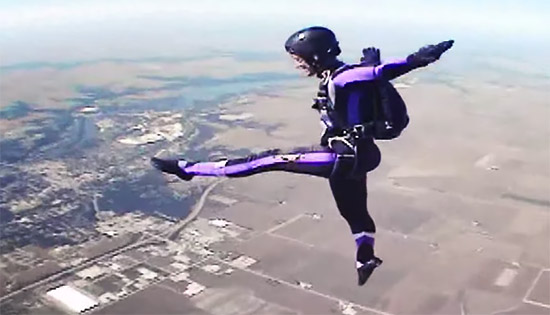 It doesn’t shy away from the inherent danger either: in one scene, Andy Junghans, wearing a Skydive Twin Cities hat, tells the story of a fellow skydiver who didn’t react quickly enough when his chute got tangled up while in the air. “When other divers reached him, they saw that his femurs were shoved up into his rib cage and he was gurgling blood…he stayed like that for about five minutes until he died.”

While it would have been interesting to learn more about what these people do in their “day jobs” or how their family and friends feel about their hobby, Schumacher ably brings us into this intense world of adrenaline.

Given what he has gone through in his life, The Unrelenting Charlie Davies, the 17-minute short film directed by Bryan Reisberg that premiered earlier this year on ESPN2, feels like a missed opportunity. It features Charlie Davies, once called “the most promising striker in American soccer,” and his recovery from a horrific car accident that nearly took his life.

Davies was a popular athlete who went on from Boston College to play for the US national team. In 2009, he got into a car with two women he didn’t know well and was injured when the driver smashed into a metal guardrail. With a shattered femur and a fractured skull, one of his friends said “he looked like he was dead.” The movie seems to skip ahead to his first game after the accident where he, despite having a right leg 1 ½ inches shorter than his left, scored two goals.

It would have been interesting to learn more about the aftermath and psychology of the accident: What was it like to survive that? To what do you attribute your ability to go through that and come back to play soccer at a high level? What has changed in your life as a result of the accident? It was well done (I’m not a soccer fan but I enjoyed his biography) but it just felt like the filmmakers could have dug a lot deeper.

7 thoughts on “TCFF 2016 Documentary Reviews: ‘In Search Of America’ + ‘Beyond The Thrill’ + ‘The Unrelenting Charlie Davies’”