I know the next 10 days is going to be a whirlwind! Day 3 of Twin Cities Film Fest has pretty much come and gone. Thanks to Sarah Johnson, my awesome reviewing partner during TCFF, for contributing to the reviews of various indie and short films. Check out her bio page here, she’s a MN-based freelance writer who also writes for City Pages.

“I am probably going to punch you in the face,” one of his friends says to Scott (Jon Weinberg) early in “Funeral Day.” Most of us have a slightly neurotic friend that we love anyway. In his feature film directorial debut, Weinberg also tackles the lead role as a hypochondriac who finds a mysterious lump on his testicle the day of his friend’s funeral and decides to skip it in order to start living his life to the fullest.

We meet a cast of characters – the jilted ex-girlfriend (Rahnuma Panthaky), the sleazy real estate agent (Dominic Rains, who has my favorite line of the movie – “I work for a living, do you think I have time for friends?”) and the Zach Galifianakis-type Chuck (Tyler Labine) – in Scott’s search for meaning.

While the cast is strong, I found the script at times (written by Kris Elgstrand) to be a little too raunchy, in that it almost took away from what would otherwise be an unexpectedly light way to look at dark topics such as illness and morality. Unquestionably what saves the movie for me is the winsome charm of Weinberg in his portrayal of a nuanced character.

‘In Pursuit Of Silence’ Review 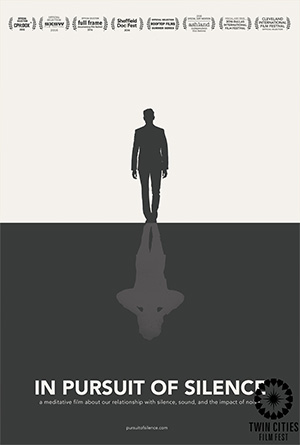 Even before watching the trailer, I was immediately intrigued by the idea of In Pursuit of Silence. Billed as a meditative film about our relationship with silence and the impact of noise on our lives, it does exactly what it says on the tin. I truly believe silence is a lost art, as we’ve become increasingly absorbed by the bustling world around us and become more desensitized by it. I love documentaries like this that really make you pause and think about the world around you.

Directed by Patrick Shen, the film itself uses sound… and silence, in a unique way. There are plenty of scenes where the only sound is comes from nature, be it the rustling trees or grass in a field, sound of water streams, or the wind in a vast, expansive space. It features several talking heads of experts in the field, some are actually on the field measuring the decibel level of certain environments. It’s amazing how loud certain cities have become that it far exceeds what the normal human hearing should withstand. The extended exposure of such loud sounds will no doubt cause hearing loss, yet most of us don’t realize it. I think people pay more attention to air pollution than sound pollution, but the latter can be just as damaging to our health.

It also takes to to various parts of the world… Japan, India, London, New York, as well as Minneapolis. The film features Orfield Laboratories in Minneapolis, which lab is 99.99 percent soundproof and thus considered one of the quietest places in the world. I love how the film contrast the quiet serenity of a traditional tea ceremony in Kyoto with the deafening sound of the loudest city on the planet that is Mumbai during the thundering festival season.

In his director statement on the film’s website, Shen said that he …’hope that the film challenges audiences to slow down and on some level make the world new again for them.’ I think the film accomplishes that and it truly serves as a respite for me as I’m going through the busiest time of the year covering for TCFF. I’m definitely glad I watched this and I think every citizen of the world should!

Get the TCFF App!

The TCFF app is such a lifesaver for me. Instead of futzing with paper that’s easily lost, download the app so you have easy access the film schedule at your fingertips! It’s got all the info for the daily educational events as well as film schedule, which is immensely helpful!

Stay tuned for more TCFF reviews and my interview with the filmmaker of Word of Honour: Reclaiming Mandela’s Promise documentary!