The title of the film may sound like a superhero film but this indie drama is as far away from the ubiquitous genre as it can get. It made me think of The Sound of Music if Captain Von Trapp were to uproot his entire family to the Austrian Alps and homeschooled all his kids instead of hiring Maria.

Set in the forests of the Pacific Northwest, Ben Cash has been living off the grid with his six kids. The film opened with a deer hunting scene that’s quite graphic and intense, prompting the woman next to me to leave the theater and never came back. Perhaps she’s an animal lover or something, but I think it’s her loss that she missed out on this film because of it. 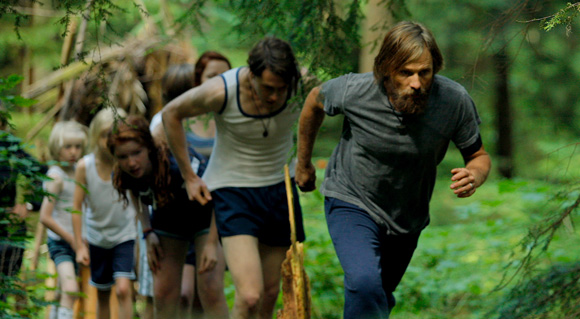 It’s a provocative way to open a film, and an effective one as well as we get to see right away how Ben has raised his kids, Bodevan, Kielyr, Vespyr, Rellian, Zaja and Nai, with vigorous physical and mental training. They live their lives without any of the conveniences and daily luxuries most kids in modern society won’t be able to survive even for a day. Though the kids don’t follow common academic curriculum, they’re taught to be critical thinkers. Instead of playing video games or lying around listening to music all day, the Cash kids read books, play music, hunt for food, and actually spend time with each other.

It’s a really fascinating slice of an unorthodox life, anchored by a soulful yet physical role by Viggo Mortensen. There are numerous themes that are explored here. Parenting is a big one, and I think every parents (especially in America) would benefit from watching this. The scene when the Cash family visit their conventional aunt and uncle in the city (played by Kathryn Hahn and Steve Zahn), it shows a stark contrast of how their respective kids are brought up. The Cash kids are well-versed in the the Bill of Rights and know who Karl Marx is, while their cousins are far more knowledgeable about pop culture. If I were a parent, it certainly would make me ponder just how much (or I should say how little) kids are learning in school!

Their lives take an unexpected turn with news of the death of Ben’s wife, Leslie. It’s not a spoiler to reveal that because that even it the catalyst to the journey the Cash family had to take. Ben didn’t spare their feelings when he revealed the news, and it’s certainly a poignant moment that’s beautifully portrayed. The Cash family have to leave their idyllic existence in order to attend Leslie’s funeral, and in the course of that journey, Ben is challenged with the idea what it really means to be a parent and brings into question all his philosophies/beliefs he’s taught his kids.

Now, one does not have to subscribe to his worldview to emphasize with Ben. I for one don’t see eye to eye with him on a spiritual level. Instead of Christmas, they celebrate Noam Chomsky Day. He also vehemently opposes Christian funeral traditions, claiming that his wife had become a Buddhist believer and would rather be cremated instead. Now, while one might admire Ben’s parenting style and what his kids accomplished, no doubt they’d run into issues given that they’ve lived such a sheltered life and away from society. The kids are respectful and bright, but lacking in common social graces. “You made us freaks!” one of the kids, Rellian (Nicholas Hamilton), screamed at Ben. He’s got a point there and the film shows many examples of that. The scene where the eldest Bodevan (George MacKay) promptly proposes to a girl after kissing her at an RV campground is funny but rather sad as well. The film is peppered with funny and amusing moments, but a lot of the humor isn’t slapstick but laden with irony and poignancy.

The themes of parenting and coming-of-age blend seamlessly, and in a way it’s a coming-of-age of sort for Ben as well as a father. The main conflict arises between Ben and his father in-law Jack (Frank Langella), who sternly opposes Ben’s way of life and how his grandchildren are raised. It seems at first that Jack is painted as the *villain* of the film that threatens to separate the kids from their father, but fortunately the film isn’t so simplistic. Liberal sensibilities seem to prevail here, but writer/director Matt Ross doesn’t present things in a formulaic way, and there’s a vast thought-provoking themes being explored here. He boldly presents a compelling yet flawed hero, and chose an absolutely perfect actor in Viggo to do the job.

He’s the epitome of intellectual free spirit, a Renaissance man who’s set in his ways. The intensely charismatic Viggo Mortensen bared all for the role, mentally and physically. I’d hope to see his name popping up in the Best Actor race come award season. There’s a rather amusing nude scene, made more hilarious by the reaction of the people who saw him being so nonchalant about it, as if it’s the most natural thing in the world. The challenge to normalcy seems to be what the whole movie is about, and it certainly gives you plenty of food for thought. 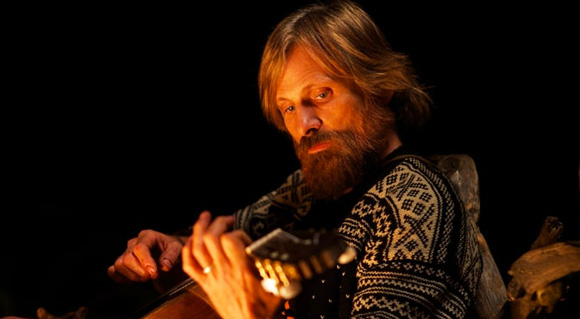 The movie works largely because of the talented cast. In addition to MacKay and Hamilton, we’ve got Samantha Isler, Annalise Basso, Shree Crooks and Charlie Shotwell as the talented young actors who play Ben’s children. Each have their moments to shine and you believe them as a close-knit family. The only thing I wish were explored a bit better is the relationship between Ben and Leslie. The only flashback scenes we get are mere glimpses of the two gazing lovingly at each other, which doesn’t reveal anything about Leslie’s mental condition or suicidal tendencies.

It’s been a couple of months since I saw Captain Fantastic, which was my JULY Movie of the Month AND it’s also one of my fave 2016 films so far. It’s a beautifully-shot film with panoramic shots of the Pacific Oceans and the Rocky Mountains region. Certainly a film that subscribe to the old adage that it’s the journey, not the destination that really matters. It’s certainly one of the most eccentric films I’ve seen this year, both amusing and haunting, but definitely indelible.

Have you seen ‘Captain Fantastic’? Let me know what you think!