Well it’s technically Spring and the sun is shining outside, but Winter hasn’t quite left us just yet. Temps is only in the 40s so we can’t exactly plant those Petunias just yet. Heck, we might even still get snow later tonight! But hey, it IS April so I’m gonna pretend Spring IS here.

So here are movies I saw this month:

(in order of viewing)

I’ve reviewed Shaun the Sheep, London Has Fallen, Eye in the Sky, Crouching Tiger 2, Batman V Superman and Before We Go. I’ve pretty much summed up my thoughts on Knight of Cups here. I should have my review of Suite Française later this month as I still haven’t got around to reviewing any of Sam Riley movies [sigh]. I did do a special Music Break post dedicated to Control though. As for Suite Française, lets just say the UK dvd I bought from Amazon (which I had to convert into Region 1 so I can actually play it) was well worth the purchase!

On the TV front, I finished the entire season of Daredevil in just one week! That is quite a record as normally my hubby and I take our time with TV shows. Well, suffice to say Daredevil season 2 was great, I’d say it’s on par with season 1, with an even better adversary in The Punisher. I’ll definitely do a top 10 post for it, just like I did with Jessica Jones.

Yes of course I rewatched a few of Sam Riley films. On the Road and Control are the kind of films I could watch a few times a year, even just to indulge in Sam’s performance. I only have one more of his feature films to watch, which is a British thriller 13 (see trailer below) which has a stellar ensemble cast (Jason Statham, Mickey Rourke, Ray Winstone, Michael Shannon, etc.) which I plan to watch next week. After that I’ll be done with his entire filmography!

…
Of course there’s always time for period dramas in my life, so I rewatched BBC’s Persuasion just a few days ago. Apart from the awkward kissing scene, I love this adaptation. Persuasion is my favorite Jane Austen story after Sense & Sensibility. Now, A Promise is a very flawed drama, but for some reason I enjoyed it… there’s something about the way Richard Madden pines for Rebecca Hall that I find so irresistible. 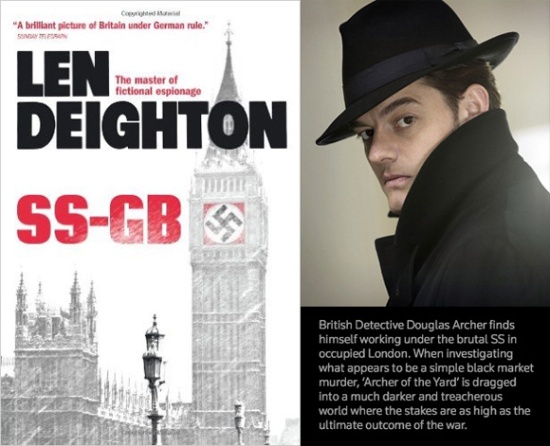 I’ve been devouring this excellent novel by Len Deighton, which is an alternative history narrative set in a Nazi-occupied Britain, centered on a Scotland Yard detective Douglas Archer. BBC is currently adapting SS-GB as a five-part miniseries with my dahling Sam Riley as the protagonist Archer (yay!) I’ll be blogging about this project specifically, but let’s just say the book is a page-turner, a MUST for all spy fans.

SERIES OF THE MONTH

I actually don’t really have a favorite new-to-me film I saw this month. It would’ve probably be A Streetcar Named Desire, but since I was unable to watch it last week for the Blindspot series, I’m putting down Daredevil Season 2 as the best thing I watched in March. I can’t wait to see the standalone Punisher series, I wonder if they’ll have that before or after Daredevil season 3. Either way, I’m up for both!!

Films I look forward to in April

Born To Be Blue

I’m hoping to catch this one later this weekend. I have the screener link but it has the pesky watermark on it so I’ve sort of been putting off watching it. Hoping to chat with the director too, we’ll see if that pans out. I’m always up for an interesting music biopic and I don’t know anything about Chet Baker so it should be interesting.

I missed the press screening of Demolition last month but fortunately there’s another one scheduled next week, so I can’t wait for this.

This screening is actually scheduled the same time as The Jungle Book. I’d love to see that one too but I didn’t really like the theater it’s screened at so I chose this one. It’s probably not gonna be a great movie, but I’d still see it just for the trio of fabulous women: Charlize Theron, Emily Blunt and Jessica Chastain. I think it’s inspired casting to see Theron and Blunt as sisters.

Despite the stellar cast, this film never got a theatrical release. I actually heard about it in one of Sam’s interviews where he said he saw it years later and had to find it online somewhere to see it! The reviews haven’t been kind, but really, with THIS cast (esp. Sam in the lead role!) I simply have to see it. It’s interesting too that the Georgian director actually remade his own movie 13 Tzameti and set it in the US with British/American actors.

Well that’s my recap of March. What’s YOUR favorite film of the month?