Happy Tuesday, folks. Well, I’m kinda bummed that I couldn’t complete my March blindspot on time. Last night I was planning to watch A Streetcar Named Desire after work but the internet connection just wasn’t working properly that iTunes simply couldn’t load the movie. It stared for like 2 minutes then stalled and stalled that I finally gave up 😦 In fact, I’d have to ask iTunes for a refund as it’s a 24-hour rental and I don’t think I have enough time to see it before it expires. Ah well, at this rate I’m not even sure I could complete even the 10 Blindspot films I’ve committed to watch, we shall see.

As far as weekend viewing, well I saw Batman V Superman on Friday night (my second viewing) and some of you might’ve read my review. So on Saturday we’re looking for something that’s totally different from a superhero movie. I got a screener link for the Chet Baker biopic Born To Be Blue starring Ethan Hawke, but the thing w/ screener links are that it has an unsightly huge watermark right smack dab in the middle of the screen, so my hubby didn’t want to watch it.

Ironically, we ended up settling on something directed by a Marvel superhero 😉 So here’s my review of Chris Evans‘ directorial debut… Before We Go.

I mentioned about this movie three years ago in this Five for the Fifth post, which sounds kind of like Richard Linklater’s Before Sunrise trilogy (heh it even has the word ‘before’ in the title!). It also sounds utterly cheesy so when it hits Netflix earlier this month, I wasn’t even sure I wanted to see it. But you know what, sometimes our prejudices got the best of us because I ended up liking it.

We first met Chris Evans’ character Nick, playing trumpet at Grand Central Station. It’s past midnight and the station is closing soon. Minutes later he comes across a pretty girl who ends up missing her 1:30 train from New York to Boston. She happens to break her phone as she was running in front of Nick and that’s how their encounter began. Not exactly a ‘meet cute’ and there isn’t an immediate spark between Evans and Alice Eve who plays Brooke. It took me a while to warm up to the movie and a few times I even thought about turning it off and watch something else, but y’know what, I’m glad I stuck it out.

One thing that initially frustrates me was the fact that there’s such mystery surrounding the reason why Brooke is adamant on rushing to return home to New Haven that very night. But once it’s finally revealed towards the end, I actually appreciate how the story unfolded and that there’s more to the story than meets the eye. The pairing of Evans and Eve was rather unexpected, apparently Evans wanted to hire her because she was British (per IMDb) but she ended up playing Brooke as an American. I like both of their performances as they’re more natural and understated, even when at times the dialog was clunky and the script did resort to schmaltziness. 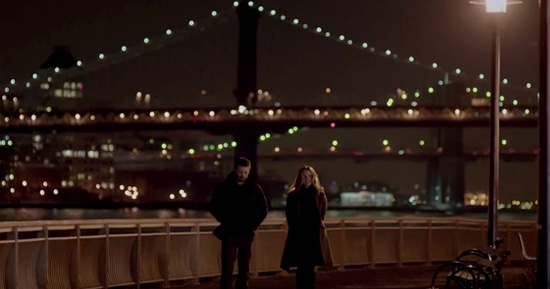 Overall I’m quite impressed with Evans’ direction. He’s wise to pick a script that deals with a small number of characters to be more focused, and takes place over the course of a single night. The fact that he’s a first timer means we can’t expect a perfect movie. There are some continuity problems (like a jacket button is closed one second and open the next) and the pacing could’ve been much improved, but in the end it’s a rather sweet and moving little film. It also managed to take me by surprise on a few occasions, and something unexpected is always a good thing in a genre that tends to be predictable.

Before We Go is an intriguing look at love lost and second chances, told from two very different point of view and circumstances. Nick and Brooke end up learning from each other over the course of the night, and the tentative romance between them feels earnest. The gorgeous Manhattan backdrop certainly adds to charm. This turns out to be the perfect antidote to this weekend’s gigantic blockbuster, as well as an interesting juxtaposition to Evans’ own superhero movie Captain America: Civil War that’ll be out in a month. Well, there’s definitely more to him than just a Marvel superhero, and I hope he continues to explore the indie side of his career.