Hello hello! Miss me? Well I’m not exactly back yet, I’m extending my hiatus probably until after Christmas. I’ve been diligently working on my script daily and I don’t want to lose momentum. I might still do a post here and there if I have time and feel like doing it, so don’t forget me 😉

Well, we’ve been watching a ton of great movies, both new releases and rewatches, thanks to the four-day Thanksgiving weekend. Here they are in alphabetical order…

I had the pleasure of seeing Tom Hiddleston as Coriolanus during a National Live Theater presentation at a local cinema last week. It was a powerful and mesmerizing performance from the Shakespearean actor. I wish I could’ve seen it live on stage, which would’ve been amazing to watch considering how intimate the Donmar Theatre was, it seats only 250!

Man in the High Castle (season 1) 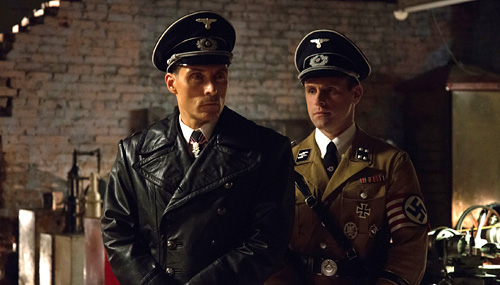 I have to do a whole post on this series as I have a lot to say about this Philip K. Dick’s adaptation. But for sure Rufus Sewell is one of the highlights here, if only the producers realized that and give him more screen time in future seasons.

I rewatched a ton of movies this past month, which turns out to be quite an eclectic collection now that I think about it. Hey, I love the action stuff as much as the romantic love stories 😉

Well, that’s my November update. What about you, what’s your favorite film you saw last month?