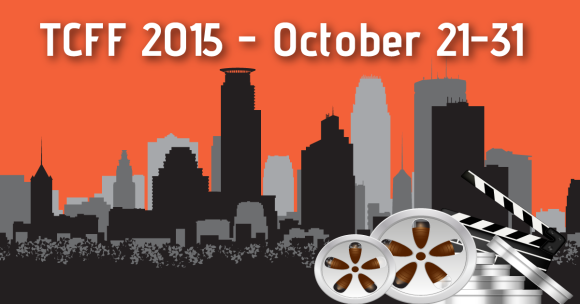 And so it begins!! In less than 24 hours, the 6th annual Twin Cities Film Fest commences! Starting this Wednesday, we’ll have 11 days filled with cinematic festivities… 120+ films of national and international screenings, live musical performances, red carpet galas, cocktail mixers, film panel discussions and all kinds of special events for film lovers to enjoy. From today all the way until Halloween, SHOWPLACE ICON THEATRE is THE place to be for film lovers in the Upper Midwest!

I’ve been blogging for TCFF since its inception back in 2010 (all documented in my TCFF Archives page) and it just keeps getting better and better! Whatever type of cinephile you are, you’ll likely find something to look forward to at TCFF. Now, I’ve been wanting to do a top 10 list to kick off the event, so today seems as good a time as any.

How do I love thee TCFF? Let me count the ways…

A film fest with a cause

Each year TCFF brings awareness to an important social issue, such as bullying, hunger prevention, poverty, sex trafficking which were themes from the past few years. This year, the Twin Cities Film Fest is partnering with Minneapolis-based YouthLink, which serves as a resource center for homeless youth. According to the nonprofit, on any given day about 4,000 youth are homeless in Minnesota. We have four films tied to the topic of homelessness, including this opening night film, A New High. I think it’s cool that the organizers are mindful about the social issues of the community and make the most of the festivities for a great cause!

One of the perks of attending a film festival is that you get to see smaller independent films that you probably won’t get to see until much later when it’s available on VOD. But there’s something about going to the theater and seeing them on the big screen that makes it extra special. There are a plethora of great indies I’m looking forward to, some of them I’ve highlighted in this post. Three of the big studio movies I REALLY can’t wait to see are The 33, Brooklyn and Youth. 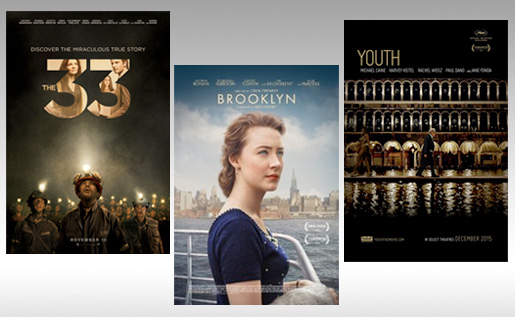 TCFF’s artistic director Steve Snyder have highlighted some of the top ones from each day, here’s just a sampling from this week alone:

Wednesday, Oct. 21 – For Book Fans and Oscar Buffs: ROOM – This is probably the biggest film we’re screening. Period. But given the odd timing, there’s still seats available. It stars Brie Larson, is based on the hit book, and just took home the top prize of the Toronto International Film Festival. 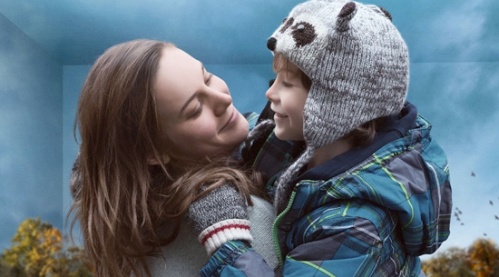 I saw this a couple of weeks ago at a press screening and was blown away. I’d be sorely disappointed if I don’t see Brie Larson’s name in this year’s Best Actress nominees!

Friday, Oct. 23 – War Film and History Buffs: Remember – Starring Christopher Plummer as a Jewish man who barely survived World War II and Auschwitz who sets out as an elderly man to get revenge against a Nazi camp guard. 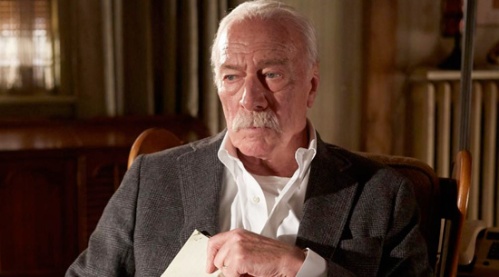 Saturday, Oct. 24 – Romantic Comedy and Katie Holmes‘ big comeback! Touched With Fire – Holmes returns to the movie screen in this South By Southwest smash shit. She plays a bipolar poet who befriends and then falls for another poet while admitted to a psychiatric hospital. 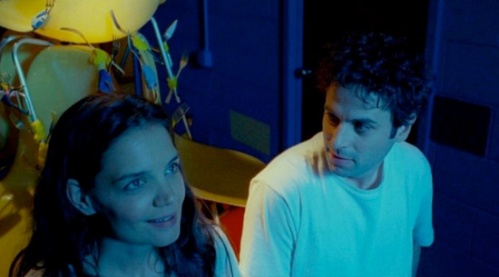 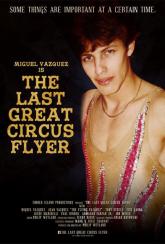 Sunday, Oct. 25 – Performance Arts: The Last Great Circus Flyer is one of the year’s best documentaries, about the greatest trapeze artist who ever lived – the first to ever complete a quadruple jump – who one day abruptly quit the circus and walked away. Director Philip Weyland AND the trapeze artist Miguel Vazguez himself will be present. This is a magical film.
Stay tuned for my in-depth interview with the gracious Mr. Weyland, I can’t wait to meet him and Miguel in person!

Speaking of great docs, well I’ve highlighted seven not-to-be-missed documentaries in this post. For the first time in TCFF’s six year’s existence, the fest will open AND close with a documentary feature: A New High and Thank You For Playing, respectively. 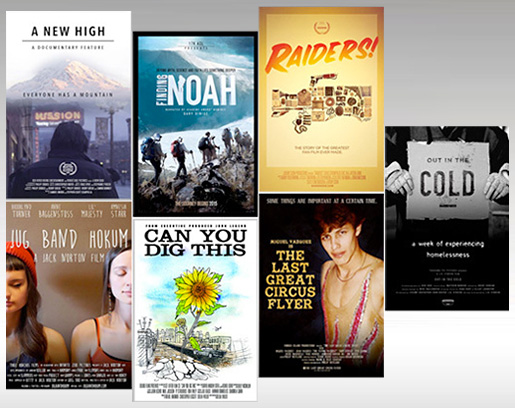 Each year TCFF programmers seek out some of the most riveting documentary films to share with our festival goers. This year they went above and beyond! The FILM page on TCFF official site makes it easy to search films by genre, so as you can see under the Documentary page, there is something for everyone.

The gender disparity in Hollywood when it comes to female talents AND filmmakers have come under scrutiny of late and I certainly welcome the opportunity for discussions. So I’m always glad to see more and more women in the the notoriously male-dominated industry and pushing through challenges to get their films made.

These are just some of the female filmmakers whose films – big studio films/indies/docs/shorts – are screening at TCFF:

A variety of MN-connected films

It thrills me that Minnesota have such a booming arts & film culture… we have nearly 50 MN-connected films playing at TCFF just this year alone! Now, when we say MN-connected, it doesn’t always mean they’re filmed here or that the topic is about MN, but we also have MN-based producers financing Hollywood films.

Some of those filmmakers/producers are coming to town, such as Andrew Putschoegl for NERDGASM, Justin Mikelson for The Dust Storm, and Zac Adams & Tim Vandesteeg for Autism in America doc. I also got a chance to interview executive producer Ralph S. Bovard for the indie sci-fi The Quiet Hour.

A plethora of great short films 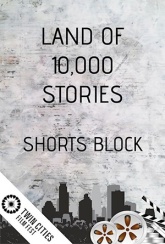 I tell myself that I need to see more short films, but I don’t always get around to checking them out. I’ve just reviewed a great short film In Vitro by actor Toby Stephens recently and I always think that short films can be just more effective and compelling than feature films.

So it’s great to see that TCFF continue to feature short films in blocks with various themes, i.e Land of 10,000 Stories, Coming of Age, Love American Style, Shoot to Kill, etc. I’ve seen a few of them and are REALLY impressed by the skills of these filmmakers in crafting engaging stories efficiently told in such a short time. In many ways, developing a short film serves as a launching pad for some filmmakers trying to break into the industry, so there’s definitely a ton of promising work represented here.

I have to give kudos to Matt Cici who’s in charge of this year’s Educational Events. I came to know Matt from his directorial debut Lambent Fuse, and earlier this year he’s also played the lead in The Center. He’s put together a collection of great film panels, featuring screenplay reading and discussions on film trends. The best part? These events are FREE and takes place at TCFF Lounge right at Showplace ICON Theater, so if you’re going to see a movie anyway, might as well attend one of the panels and get great insights from film experts and those who’re working in films that are screening at the fest.

Two of the panels I can’t wait to participate on are:

Perhaps the best perks as a TCFF blogger is the opportunity to chat with filmmakers and talents involved with the fest. I definitely have the most interviews, perhaps more than the last two years combined! Most of the filmmakers/producers have been so gracious and kind in responding to my interview requests, so stay tuned for the interview posts in the next two weeks. Special shout out to directors Emily Ting, Philip Weyland, Brent Baum, Ryan Lacen and David Spaltro for taking the time to do the email interviews, can’t wait to see all of you at the fest!!

Of course the venue of a film festival is crucial for theatergoers and filmmakers to enjoy and it really doesn’t get any better than Showplace ICON Theatre at the Shops at West End! It’s become my favorite theater with its comfy VIP section and great lounge upstairs (fabulous burgers!).

Just one of the perks of for TCFF festival goers year after year is the mixers/after party. You can check out the Mixer schedule to see which band is playing on a certain night. Anyone with a ticket from a film that day may attend for no charge. We’re also offering a TCFF Festival Lounge Pass this year for people who just want to enjoy the mixers without buying a film ticket. The mixer space at the former Love Culture space across the street from the theater is three times as large as last year’s spot!

Being around film fans

Last but not least, the best part of attending any film festival is being around fellow film fans! It’s awesome meeting new people who share the same passion, whether it’s just people who enjoy watching movies or those in the industry making them. It’s a fantastic place for networking or simply hang out with fun people who love movies!

I’m thrilled that this year I’d get to meet yet another fellow film blogger! Mike from Just Me Mike blog is actually coming to Minneapolis to cover TCFF! I’ve come to know Mike over the years and enjoyed reading his blog, so it’ll be a treat to hang out with him in person starting tomorrow. Of course I also look forward to hanging out with my friends and FlixChatter blog contributors Ted S. (whom most FC readers already know) and Sarah J. who’ve helped cover TCFF in the past years!

So thank you Jatin Setia, Naomi Dahlgren, Steve Snyder, Bill Cooper, Dani Palmer & the rest of TCFF staff for always bringing your A-game year after year in bringing us this awesome film event!!

Well that’s just a sampling of why I’m super excited for TCFF 2015! Stay tuned for a complete coverage of the fest and see which movies you wouldn’t want to miss!

27 thoughts on “10 Things I Love about Twin Cities Film Fest!”