Most of you who read this blog regularly knows I’m a huge Bond fan as I grew up watching them with my two brothers. Over the years I’ve become more partial to Timothy Dalton’s portrayal as Bond and I always appreciate both of his Bond films. I only wish he had the chance to do a third (which was he was under contract for until MGM legal battles delay production for six years!)

I’ve recently rewatched Licence To Kill again for MovieRob’s Bond December Blogathon, and still thoroughly enjoyed it. I’ve done a special appreciation for Dalton in the film, but this post will highlight TEN reasons why the film itself is one of my favorite Bond films of all time. 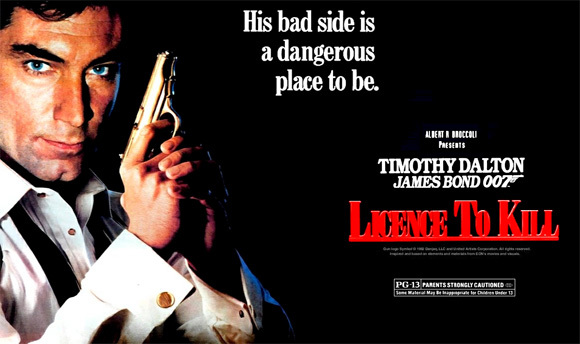 10. The hard-edged but also hugely personal storyline, interwoven with the Japanese Ronin tales with Bond as a rogue agent avenging the death of his friends. People complain that Bond might’ve been too dark but perhaps Licence to Kill was way ahead of its time as with Skyfall, people didn’t seem to mind the personal angle of the story. It’s a grounded, more realistic tale that doesn’t pit Bond as ‘savior of the world’ that’s become cliched and derivative.

9. Memorable opening scene that thrillingly and effectively sets up to the origin of Bond’s personal vendetta and the kind of ruthless gangster he has to contend with. It later featured a high-flying action as Bond and his CIA ally Felix Leiter captures drug lord Frank Sanchez by hooking his plane like a fish, literally!

8. Michael Kamen’s score – I’m a huge fan of John Barry’s work with the Bond franchise but as he was unavailable at the time. Given that the film’s released in the late 80s and Kamen’s scored other successful action franchises like Lethal Weapon and Die Hard, he seems to be the perfect composer for the job. There’s even a bit of John Barry’s elegant sound to it, but mixed with a darker tone and heart-pounding up-tempo style for the action scenes.

7. Memorable Bond girls who are more than mere eye candy – with interesting but believable names, not preposterous ones like Dr. Christmas Jones or Pussy Galore. I especially love Carey Lowell as Pam Bouvier, a beautiful and strong former CIA pilot who’s saved Bond’s ass many times over. Talisa Soto is perfect as Sanchez’s sultry mistress and though she may seem Bimbo-like at times, her character actually has a purpose in Bond’s quest to get close to Sanchez. 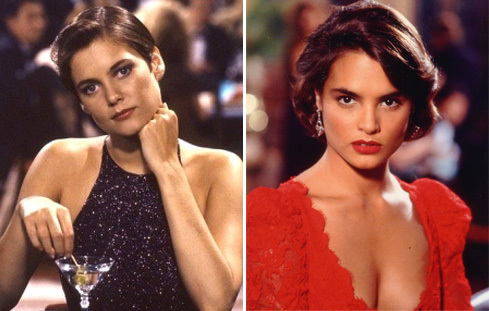 6. Great character reinvention – as this is longtime Bond director John Glen’s final Bond outing and the fact that Dalton’s keen on returning to Ian Flemming’s work, Licence to Kill feels like Bond of a new era, a complete break of the Moore’s mischievous style in every way. There is nothing whimsical about Licence to Kill, though I wouldn’t say it’s devoid of humor. Q’s intro to the film is actually quite hilarious, but it’s not just humor for the sake of it.

5. Gritty set pieces and spectacular action. Dalton did most of his own stunts, even when he was high up in the air in the ‘plane hooking’ scene, and the climactic truck chase is still as bad ass and riveting by today’s standards. If you look at the featurette, the scene isn’t crafted by CGI, but they used real tanker trucks and feature incredible stunts in the dangerous and supposedly haunted twisty highway of Rumorosa, Mexico. Sure there aren’t many of Q’s gadgets in this movie, but who with thrilling stunts like these, who needs ‘em?

4. A formidable villain in Robert Davi. Frank Sanchez breaks the mold of the typical sociopath hellbent on ruling the world. There’s no over-the-top plan to recreate the human race and all that, Sanchez is simply a power-hungry and greedy mafia-type who strives to be a cocaine billionaire. Davi is one of my fave Bond villains because he’s menacing, brutal and cold-blooded killer but he’s also suave and sophisticated, one of those rare villains that’s as charismatic as Bond himself. Oh and who could forget one of his loco henchmen Dario in the form of young Benicio Del Toro.

3. Suspenseful interaction between Bond & Sanchez – In many Bond films, when Bond meets his villain, usually they know he’s the enemy [which then calls for one of his henchmen to go after him]. But in this case, Bond enters Sanchez’ world as an ally, a trusted friend. I love their first meeting when Bond offers himself to Sanchez as someone who’d be good for someone of his stature… he’s not just a problem solver, but ‘more of a problem eliminator.’ As Bond sneaks out to infiltrate his organization and slowly tear it apart, there’s always tension that Sanchez will suspect something and he’d get caught at any moment.

2. Great climactic scene – not only is the CGI-free action stunts are incredible, but it’s such a pivotal moment between two men that’s been built up from the start. Thanks to strong character development between Bond and Sanchez, this climactic battle feels deeply personal to both of them. In a strange way, you also feel for Sanchez in that up until Bond showed the silver cigarette lighter from Leiter, he had no clue why Bond betrayed him. It’s a fiery finale, in every sense of the word, but it’s also a satisfying one and definitely one of the most memorable villain deaths. 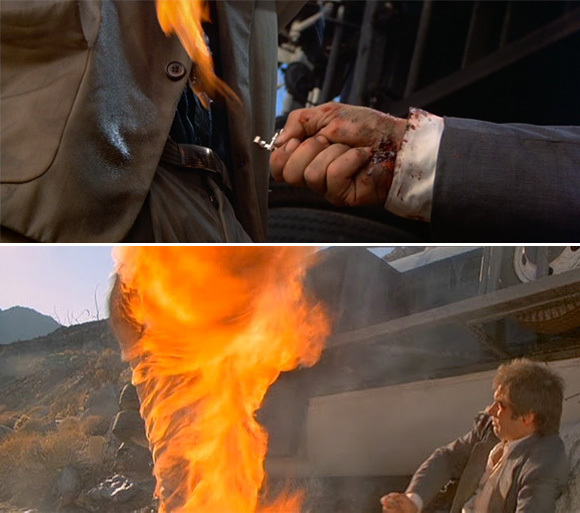 1. Timothy Dalton – Bond with substance, bad-ass but refined, gritty without being thuggish and he can be menacing and vulnerable in a matter of seconds. Case in point, when Bond confronts Pam Bouvier in the hotel room, he was angry enough to pull the trigger on her, but when she reveals the truth that ‘there’s more to it than his personal vendetta,’ Dalton’s expression immediately immediately softens and the remorse is palpable on his face as he hands her gun back to her.

Nice to see the glamorous playboy actually fights out of love and loyalty and the story utilizes Dalton’s Shakespearean training perfectly. He’s not a super spy that people can’t relate to, but he’s plays Bond as a human being with real angst and real feelings, but as it’s said in the poster, he’s got a real dangerous side to him that is both intimidating and sexy. He’s believably ruthless, too, as when he threatened a beautiful woman “Make a sound, and you’re dead!” we believe that he actually could pull the trigger. The tall and lean Dalton is both a physical and cerebral Bond and he has that understated swagger that effective but isn’t showy.

So there, I’ve made my case for both Licence to Kill and Dalton as Bond. It’s a pity this film is known as the lowest-grossing Bond film but I think it’s so criminally underrated and I urge people who haven’t seen this to give it a shot. I’d say people who like Daniel Craig’s Bonds will appreciate the tough-edged story and exhilarating action. Not to mention a fantastic performance from both actors playing Bond and his nemesis. What else could you ask for?

So have you seen Licence to Kill? Let me know what YOU think!