Inspired by a recent similar post by Caz from Let’s go to the movies, and the fact that award season looms upon us, I thought I’d bring forward the one actor that I thought deserve far more recognition than he currently gets. Perhaps the title of this post could be construed as a bit of a hyperbole. But I make no apologies that I think Timothy Dalton is a fantastic actor, and for the life of me I cannot fathom why he isn’t as big a star as other equally talented thespians like Daniel Day-Lewis or Michael Caine.

Like most people, I first saw Dalton in his debut as Bond in The Living Daylights (1987). The film itself is entertaining, albeit far from perfect. But the best part of the movie is Dalton, no question about it.

Stuff my orders! I only kill professionals. That girl didn’t know one end of a rifle from the other. Go ahead. Tell M what you want. If he fires me, I’ll thank him for it. – 007, The Living Daylights

Though I grew up with Roger Moore as Bond, seeing Dalton bring out the darker and tougher side of the British spy is so refreshing and captivating to watch. Ok, I’m a woman so naturally I expect Bond to be somewhat of an eye candy too, and Dalton — who at 6’2″ is the tallest Bond ever — is both devastatingly handsome and sexy in that dark & dangerous kind of way. Not to mention that irresistible deep and raspy voice — I could read this guy read a phone book all night long! But looks alone doesn’t make an actor, and Dalton is definitely one whose talent and acting tenacity transcend even that impossibly chiseled looks. 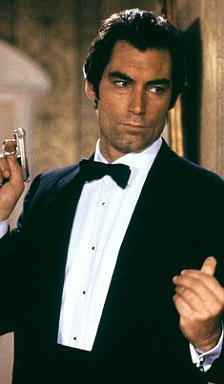 I’m not the only one who share that sentiment in regard to his Bond role. In the September ’09 issue of Total Film, journalist ‘ Richard Matthews wrote Is it just me?… or is Timothy Dalton the best Bond’ as he reassessed both The Living Daylights (1987) and Licence to Kill (1989) in light of their recent DVD re-release.

In that article, Matthews said that Dalton conformed to Ian Fleming’s blueprint for James Bond perfectly: “black hair falling down over the right eyebrow… something cruel in the mouth and the eyes cold”. And in both TLD in 1987 and LTK in 1989, according to Matthews, Dalton “brought Fleming’s fractured, damaged psychology back to Bond”. Even this National Lampoon writer defied the “commonly agreed-upon” Bond ranking in his Apology to Dalton article.

This UK’s Guardian blogger back in 2006 definitely took the words straight out of my mouth:

Ironically, the very characteristics that got Dalton slammed are the very same things that the Bond producers are praising Daniel Craig for. On and on, they have said they want Bond to be closer to the original Ian Fleming character. They want him to be grittier, darker and less jokey. What they really want, it seems, is to have Dalton back.

Some people in various Bond forums argue that Craig lack the sophistication of a British spy, instead behaved more like a thug-ish action star. That’s another topic for another post but I’m definitely in the camp that both Craig and Dalton epitomized that merciless grit and ruthlessness like no other Bond before them. Yet Dalton was clearly way ahead of his time as Craig took all the credit for doing what he had started.

But Dalton is more than just a James Bond actor. Just a few years ago I came across the 1983 BBC version of Jane Eyre where Dalton played Charlotte Brontë’s ultimate Byronic hero Mr. Rochester. I totally fell in love with his brooding and enigmatic performance, and he makes the poorly-made production of the miniseries entirely worthwhile. He continued to impress me in a variety of things I’ve watched him in: The Lion in Winter (his debut alongside Peter O’Toole and Katherine Hepburn), Framed (a fascinating crime thriller with David Morrissey), as Julius Caesar in Cleopatra, and another Brontë’s adaptation Wuthering Heights. Any one of which warrants some kind of award nomination.

The thing is with Dalton, he’s great at playing both hero and villain, as displayed in his scene-stealing turn in Flash Gordon, The Rocketeer and the Simon Pegg comedy Hot Fuzz. Heck, he even played a comic-strip character believably as Basil St. John in Brenda Starr. He even dared to venture into one of Hollywood’s all-time classic roles of Rhett Butler, in the Gone with the Wind‘s ill-conceived follow-up Scarlett and [gasp!] even silly rom-com in The Beautician & The Beast. Sure, those two are definitely poor role choices, but I don’t think it undermines his talent as an actor.

The classically-trained thespian is perhaps most comfortable on stage, having toured with the Royal Shakespeare Company and Prospect Theater Company in England. He’s also keeping busy doing voice work for various audio books, so perhaps the lack of movie roles is his own choosing. Based on this UK’s Metro interview, he strikes me as someone who’s entirely at peace with his career and is unapologetic about his choices, even his decision not to do his third Bond role. Still, I can’t help but wonder why he’s not offered the roles that actors of his stature keep getting? Think Anthony Hopkins (who had his debut in the same film The Lion in Winter), Ian McKellen, Patrick Stewart and the other two I’ve mentioned above. As I told Marc on his The Rocketeer post, it’d be nice to see Dalton in The Wolfman in Tony Hopkins role, or in Clash of the Titans as Zeus instead of Liam Neeson, or something like Michael Caine’s Is Anybody There?. We all know he has the chops and at sixty-five is still far more dashing — and Botox-free — than even actors ten or fifteen years younger.

Instead, all I can look forward to is his voice-over part in Toy Story 3 as Mr. Pricklepants, a hedgehog toy with thespian tendencies. Ha! For all of you Dr. Who fans, he’s also been reported to guest star in David Tennant’s finale as the titular character. Tennant was quoted praising Dalton to Radio Times, “He was lovely. He had the panache and the skill of a movie star, without any of the alarming eccentricities or peculiar demands.”

I don’t expect anything less from this classy actor. Here’s hoping a starring role, or even a pivotal part in an ensemble flick, pops up in the horizon soon.

P.S. If you haven’t already, check out my fantasy movie pitch Hearts Want, a romantic thriller starring Dalton as a retired MI-5 agent.

So folks, do you have your own analysis of an underrated thespian? If so, let’s hear it.

78 thoughts on “Timothy Dalton: most underrated actor of all time?”