How’s your weekend everyone? Did any of you see any new releases this weekend? I skipped the cinema again this weekend, but looks like Michael Bay wins again as his Ninja Turtles movie made $65 mil, ah geez! Well I guess it didn’t have much competition this weekend other than a couple of smaller budget films like Into The Storm  [mini review below].

On Friday I had a fabulous Movie Nite w/ two of my friends and FC contributors Becky & Ashley! We saw Toby Stephens‘ in Noël Coward’s Private Lives via Digital Theatre, which was as wonderful as I had thought it would be.

Check out the Digital Theatre trailer:

OMG, just when I thought I couldn’t love Toby more, his incredible performance here just prove how versatile and chameleon-like he is as an actor. He does this play the same time he’s filming his role as Captain Flint in Black Sails! I mean Noël Coward and pirates couldn’t be more different from each other, yet Toby inhabited both roles so perfectly that it was like watching two completely different actors!

I love Anna Chancellor in this as well, both of them are fantastic in delivering the witty lines as well as performing the physical comedy required for the roles. They have an amazing chemistry as well, definitely one of the most fun plays I’ve seen so far, so bravo director Jonathan Kent! If only I had been able to see this LIVE on stage!

After the play, we caught one episode of Starz’s new show OUTLANDER. Ashley’s already a big fan of the show and I’d be keen on watching more of this if I had cable! I mean the lush Scotland scenery is gorgeous, not to mention the hot men in kilts, he-llo Sam Heughan! 😉 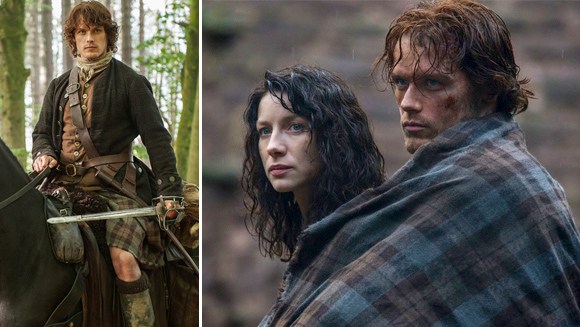 You already know I have a penchant for the Scots, and this kind of historical fantasy is so right up my alley. I’m also intrigued by the fact that Battlestar Galactica‘s producer Ron Moore is behind this. I LOVE BSG but instead of a space opera, we’ve got adventure + romance with time travel thrown in. The voice over narration is a bit excessive tho, but I’m still keen on watching the rest of the season when it becomes available.

As for Into The Storm, aka Twister 2.0. I have to admit that initially I was intrigued to see this because of Richard Armitage in the lead role. Though you can’t really call it a lead role as all the human characters are dwarfed by [pardon the pun Thorin!] by the humongous monster tornado, or I should say tornadoes as there are a bunch of them popping up at a given time, and some of them are on fire [yikes!]

Seeing this with Dolby Atmos sound [but sans 3D thank goodness!], it really felt like you’re in the eye of the storm and there’s this one scene where one character inside this Batman Tumblr-like vehicle called Titus is swept up into the biggest tornado ever. The brief floating moment felt as if he were flying inside that Titus, which actually looked pretty cool, but of course you know what happens next. What goes up, must come down, ouch! Aside from some exhilarating special effects though, there’s little to recommend it. Cliched script laden with clunky dialog, one-dimensional characters and cheesy human drama fit more for a Lifetime TV movie all play second fiddle to the storm scenes. Apparently screenwriter John Swetnam also wrote Step Up All In which also opened this weekend.

Sorry Armitage fans, I wish I could say that his presence saved this movie. Alas, I doubt ANY actor could elevate a role so poorly written. I’d say if you want to see his acting prowess, I’d rather watch his BBC shows like Spooks, North & South, Strike Back, etc. or if you’re lucky enough to see him live on the London stage in The Crucible, surely you’d see what he’s truly capable of.

Director Steven Quayle was the second unit director for Titanic and Avatar and clearly the visual effects stuff is his forte. For those who are curious about the SFX, it might be worth renting, or you could just rewatch Twister again. That 1996 movie might not be perfect either but at least the human drama was a little more engaging AND it had a sense of humor. Instead of flying cows, here we’ve got flying… airplanes?? Hmmm, it just didn’t have the same impact for some reason, no matter how realistic they made those storms to be.

Now, I finally caught this David Fincher’s ZODIAC. I’ve heard great things about it but I just never got around to it for some reason. Well I’m glad I finally did. It’s billed as a crime thriller but it’s more of a slo-burn drama that focus on the lives of the detectives and newspaper folks who cover the serial killings instead of a straight whodunnit type film. It’s even more sinister the fact that this film was based on real events in the San Francisco Bay area, as the script was adapted from Robert Graysmith’s non-fiction book of the same name. Graysmith is played by Jake Gyllenhaal in the film.

At 157 min, I was a bit worried it would drag a bit but fortunately, under Fincher’s deft hands, even the slower moments are brimming with suspense. I like the psychological aspect of how the newspaper cartoonist became so obsessed with the case that affect his relationship with his family and co-workers. There are some gruesome violence in the first act but it’s thankfully not as terrifying as SE7EN, in fact, most of the film is more of a character study filled with a lot of dialog. I like this type of thrillers so it definitely kept my attention. Great acting from the tremendous cast too, particularly Gyllenhaal, Anthony Edwards and Mark Ruffalo as the cartoonist and two detectives, respectively. Gyllenhaal is one of those actors who’s growing on me as he seems to pick more interesting roles now after taking daft roles like Prince of Persia.

It’s too bad that this film apparently tanked at the box office. Heh, clearly people are more inclined to watch thrillers with a lot more action than an intelligent and immersive version like this one. Zodiac was thoroughly gripping — a superb direction from Fincher and aided by intriguing camera work and an eerie score.

Well, that was my weekend folks! So what did you see, anything good?