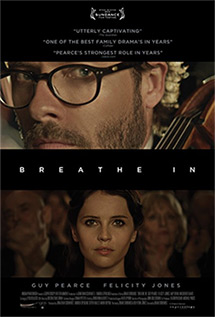 I have to admit I’m usually not into films about infidelity as it often gets glamorized on film and those getting cheated on often appear as if they deserve what happen to them. Luckily that’s not the case here. It’s more of a character study on temptation and the fragility of people who are deeply disillusioned with their lives.

The film opens with a seemingly happy family in an idyllic suburbs in upstate NY. The dad Keith (Guy Pearce) is a music teacher who is an aspiring orchestra cellist, the mother Megan (Amy Ryan), is a housewife who sells cookie jars on the side. Their daughter Lauren (Mackenzie Davis) is a swimming champion, blond and vivacious. They were all anticipating the arrival of Sophie, an exchange student from Britain who’s coming to stay w/ them. That part reminds me of an exchange student from Denmark who came to live with us when I was in high school. Fortunately there was no such drama like what happens to this family. But then again, the student at our house was not in the form of an attractive girl like Felicity Jones and there was no married male in my household.

The attraction between Keith and Sophie is inevitable and palpable. As soon as Keith helped her with her luggage at the airport, exchanging quick glances in the car or at dinnertime, all the seemingly innocent acts have an electric undercurrent. 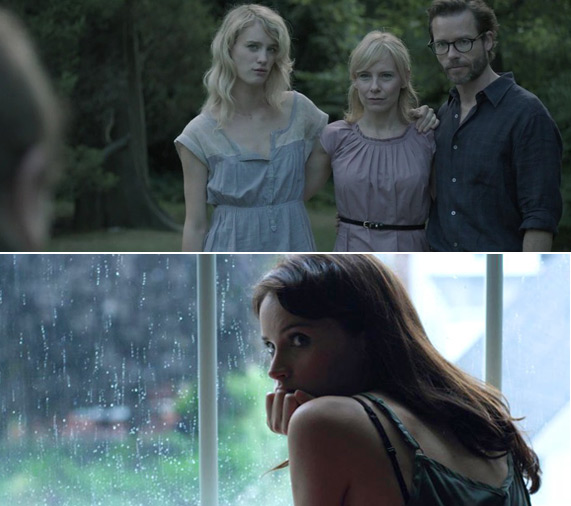 The naturalistic style of Drake Doremus‘ direction lends itself to an atmospheric and intimate setting, as well as an authentic performance from the actors. Not that their behavior is excusable in any way, but neither Keith or Sophie seems powerless to stop their attraction from getting the best of them. In Keith’s part though, it seems that it’s more about him chasing his dream of a Bohemian life, something he felt he gave up when he took on the job and move out of Manhattan. There’s no real friction between him and his wife other than the fact that she sees his aspiring career as a concert cellist as a mere hobby. Keith’s motivation in the whole affair seemed more visible, for a lack of a better word, whilst Sophie’s much more of an enigma. And that to me, felt like a crux that prevents this film from being truly compelling. The way Lauren and her teenage friends is depicted here seems rather simplistic and generalized, it certainly puts teen life in a very unflattering light.

What I do appreciate is the lack of sensational & unnecessary sex scenes which I think would cheapen the story. As my friend Ashley astutely pointed out in her comment, anyone can grind and moan but to create a real sexual tension with just the touch of a hand or even a look across the room is far more challenging. As I’ve mentioned briefly in this piano moment post, there’s not one but two memorable piano scene brimming with sexual tension. Pearce and Jones certainly have a scorching chemistry despite their 16 age gap and the build up to their first moment together was almost as tense as a suspense thriller! Pearce is one of today’s finest actors and this performance further cements his amazing versatility. Even at 30, Jones still looks believable enough as a teen, and her character is supposed to be much more mature than her age. Having seen Like Crazy, I feel like I have seen Jones in a similar role as a girl who recklessly puts desire and passion above reason. 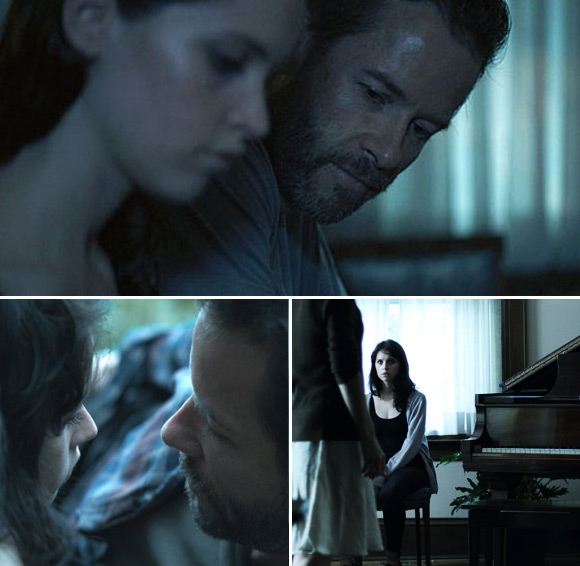 I have to give props to Amy Ryan for delivering a memorable supporting role to a thankless role as Keith’s wife. She somehow makes her character sympathetic and I’m glad the film didn’t turn her into nothing but *scornful wife* here. There’s also a droll, albeit creepy, scene with Kyle MacLachlan pointing out the elephant in the room to Pearce’s character.

I think people might call this film tedious or underwhelming as there’s barely anything happening. I can see where they’re coming from, and for me, if it weren’t for the excellent performances I’d probably think the same way. I do think the script is so sparse and the vague finale barely give us anything to grasp on. What happened to Sophie in the end? Is the family beyond repair at this point? There are gaps that seem to be intentionally left open here which can be frustrating. All the exquisitely shot and breathless moments are memorable in and of itself, but ultimately the film itself feels too indulgent and even morose for its own good. One thing for sure though, it’s quite a sobering picture of infidelity that temptation may be sweet but remorse never is. 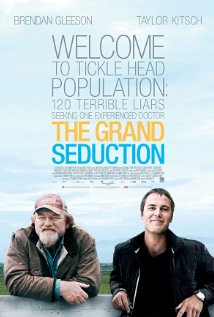 I almost missed seeing this as I couldn’t get an extra ticket for my hubby on Friday night. Fortunately there’s a second screening on Sunday night and I’m glad I made it! This is one of the most delightful and sweet comedies I’ve seen in a long while.

The tiny Newfoundland harbor called Tickle Cove was once a thriving fishing village. But now that they’re prohibited from fishing to make a living, the community is living off welfare check. So when there is an opportunity that might land a contract with a big oil corporation to build a factory, a petrochemical byproduct repurposing facility to be exact, the town realize this is an opportunity of a lifetime to save their town from complete financial ruin. What’s the catch? In order to have the factory built on their premises, the contract specifies that the town needs a permanent doctor. And that’s where the grand seduction comes in.

At first I was wondering why they choose such a sensational title but once I see the movie it perfectly makes sense! The doctor in question is a young, cricket-loving Dr. Paul Lewis (Taylor Kitsch), is only assigned in that town for a month. And so the new mayor Murray French (Brendan Gleeson) gets the entire harbor community to seduce the doctor to stay. The length to their seduction is the heart of the story and it lends itself to grand hilarity! I think the funniest bits are when the hockey-loving town has to learn the game of cricket, from creating the uniform & paddles, building the cricket field AND of course learning the rule of the game. As soon as Dr. Lewis arrives in town, he’s welcomed by practically the entire male population in a [faux] game of cricket. That’s just a fraction of the other schemes the entire town is in on Dr. Lewis, who’s so deliriously oblivious I feel like he deserves being pranked in this way. 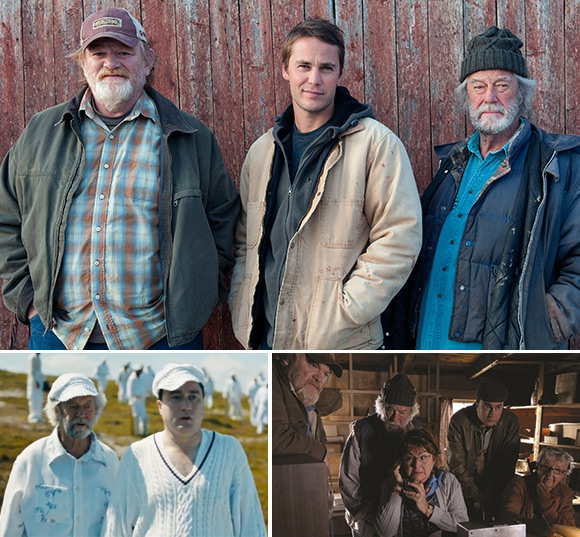 I LOVE comedies that aren’t gross, foul-mouthed or just plain silly and this movie fits that description. As director Don McKellar said during the Q&A after the film, he’s drawn to the project as it’s the kind of social comedy that has a certain dignity, a certain respect for the people being depicted. There is a purpose to every gag, down to even the smallest comic scene is not a waste. There’s an obvious ethical issue with what the town is doing, I mean they’re tapping his phone and stuff, the NSA has nothing on them, ahah. Yet it’s not done in a mean-spirited kind of way and you can’t help but root for the town as well as for the young doctor.

The name of the harbor town is perfectly appropriate as it tickles your funny bone. There are plenty of gut-busting, thigh-slapping hilarity to be had from start to finish and having real life townsfolk definitely makes it feel authentic. Gleeson and Kitsch seem like an odd match and it is, but that’s kind of the point and it’s played to great effect here. Both of them are the only two actors who aren’t from easternmost province of Canada. Gleeson is Irish (which fits perfectly to the town’s Irish heritage) and Kitsch grew up in Vancouver. Gleeson is such a great actor, but I really like him in comedies [he’s much softer here though than his character in The Guard which I saw recently]. He’s is joined by Newfoundland’s most famous celebrity Gordon Pinsent (Away From Her), and the rest of the supporting cast, including comedian Mark Critch are from the area as well. All of them are so hilarious and by the end of it I fell in love with the Tickle Cove community!

The ending is pretty predictable but in no way that it lessens the charm of the story. In fact, I don’t mind it at all that it ends on a hopeful and cheery note. I’m still gleeful just thinking about some of the funniest bits from this movie. Not only is it delightfully funny, it’s also heartwarming and beautiful to look at, it could practically doubles as a tourism video for Newfoundland. I definitely will watch it again as soon as it’s available on dvd or streaming.

Have you seen either one of these movies? I’d love to hear what you think!

61 thoughts on “MSPIFF14 Reviews: Breathe In & The Grand Seduction”