Paulette is a French comedy with a simple plot and simple characters to match. The titular protagonist (Bernadette Lafont) is an unpleasant elderly woman who, along with her late husband, once ran a successful restaurant. Now, however, she lives on minimal pension and cannot afford to pay her bills, a fact that inspires her sell marijuana. When other dealers take offense at her success, Paulette opens a bakery, with the narcotic as her central ingredient.

To be certain, Paulette is initially hilarious. For the first thirty minutes, or so, we are aghast that this woman dares tell her black confessor (Pascal Nzoni) that he deserves to be white, that she steals food from the homeless, that she tells her bi-racial grandson (Ismael Drame) she hates him because he’s black, or that she ignores her son-in-law (Jean-Baptiste Anoumon), who happens to be a police officer investigating drug trafficking. Paulette’s behavior is despicable, but it is also funny, no doubt owing to Lafont’s skill in playing the character. We laugh even more passionately when Paulette chooses to sell drugs, and then all the more when she is good at it. Quickly enough, however, the humor grows stale, because writer/director Jerome Enrico and his four credited co-writers replay the jokes too many times.

How frequently does Paulette dodge detection by her son-in-law, who is supposedly good at his job but can’t pick up on the incredibly obvious clues she spills? I lost count. How many times do her friends seem aghast at her new behavior? Again, I lost count. Eventually, of course, the friends learn the truth, but then instead of being as appalled as their previous behavior suggests they ought be, they help Paulette. Why? How many times does Paulette’s daughter drop off Leo, the aforementioned grandson, even though Paulette is a terrible caretaker? Again, I lost count. How many times does Walter (Andre Penvern) seek Paulette’s romantic affection? You already know my answer to that question.

Poor character development doesn’t help. The villains and other secondary characters are basically trait-less. Even Paulette is in-complex, no matter her changes. Simply put, she has one note early and a different one late.

Perhaps I’m being overly harsh. Thanks to its sense of humor Paulette isn’t a total failure. I just don’t think it successful either. Here the comedy isn’t enough to overcome poor character development, simplistic plot lines and repetitiveness.

The Life of Riley occurs in and around Duluth, Minnesota, sometimes venturing northward to the Lake Superior shores that surround it. In many ways, the film is a love letter to its setting; director Carrie Boberg, cinematographer Mark Hartzel and writer/co-editor/producer/star Jason Page present Duluth such that it seems equal parts calming, fun and beautiful. Boberg’s wide angle and static exterior shots prove especially effective in that regard. Like Mystery Road, another movie I saw at MSPIFF, The Life of Riley has a superlative sense of setting. All viewers, even those previously unfamiliar with the city, will fall in love with Duluth.

The central characters are lovable, too, especially Maggie (Jessica Manuel), who enters Riley’s (Page) life as he is languishing at a job he hates, so much so that he lacks inspiration to finish the novel he has been theoretically writing for years. Maggie and Riley’s first date is to join Elliot (Peter Ooley) on a trip to Minneapolis where they see Martin (Zachary Stofer) headlining a rock concert with one of his bands. The date goes well, so well that Maggie seeks out Riley the following day, whereupon the two begin a passionate relationship, one that vitalizes Riley and brings about significant changes in the ways he lives life. 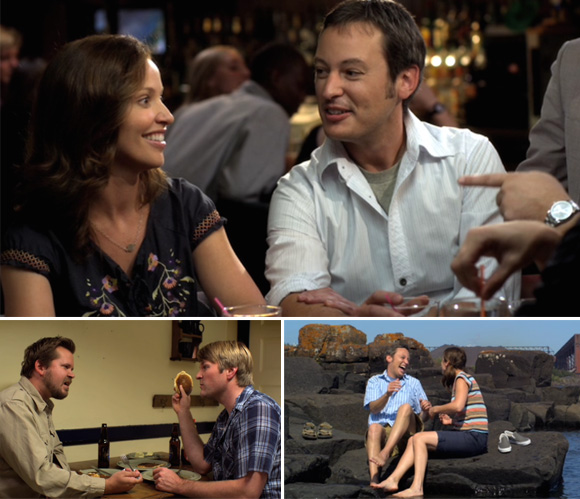 In the early going, The Life of Riley is hilarious, largely owing to the witty banter between Riley, Martin, Elliot and Maggie. The mostly amateur performers help, as well, especially Page and Manuel who play their characters with such charismatic aplomb that we almost don’t notice Riley or Maggie’s flaws.

Approximately two-thirds through the film, Page’s screenplay takes a surprising turn, one that instantly transforms The Life of Riley from hilarious to emotional. For the most part, the shift is handled adeptly, except in the moments immediately preceding it when Boberg’s directorial decisions and Page’s screenplay too directly foreshadow what is to come and thereby temporarily make the project melodramatic. In the final third, the cast stumbles a bit, too, not quite accessing proper gravitas to suit events. Finally, some of the dialogue is a little too on point.

All of these flaws are dismissible, however, because the characters are complex and captivating. Moreover, enough of the film is laugh out loud funny that we are always entertained, and, perhaps most importantly, The Life of Riley makes several interesting observations about life. The film mightn’t be perfect, but it is quite good.

15 thoughts on “MSPIFF14 Reviews: Paulette & The Life of Riley”