It’s been nearly a month since I saw Moonlight, yet I still constantly think about it. I had heard the buzz coming from Sundance and TIFF prior to its regional premiere at TCFF, and the premise of a coming-of-age story spanning three time periods intrigues me. The film is written and directed by Barry Jenkins, adapted from Tarell McCraney‘s unproduced play titled In Moonlight Black Boys Look Blue.

In terms of story-telling, Moonlight is certainly one of the most unique as well as challenging. Some might think it’s similar to Richard Linklater Boyhood (though I haven’t seen it yet) with the protagonist played by two actors. In Moonlight, the life of black-American Chiron is portrayed by three actors, from young adolescence (Alex R. Hibbert), mid-teen (Ashton Sanders) and young adult (Trevante Rhodes). The casting is impressive as all three actors, despite not looking that much alike, somehow shares a certain quiet grace about them and ability to conveys much with so little. 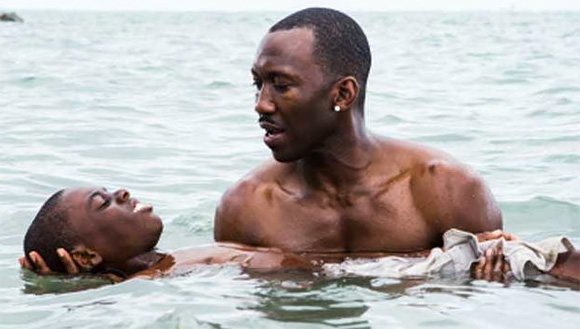 As a young boy, Chiron (called Little) lives in Miami with his single, drug-addicted mother Paula (an intense Naomie Harris), while being bullied at school and struggling with his sexual identity. It’s whilst he’s being chased by a group of kids that he meets a crack dealer Juan (Mahershala Ali) who takes him to his girlfriend Teresa’s (Janelle Monáe) house and gives him food. I love the scenes between Little and Juan, teaching Chiron how to swim, in the water as well as in the rough waters called life.

“…you gotta decide for yourself who you’re going to be. Can’t let nobody make that decision for you.”

It’s also the first time the issue of sexuality is explored, with Little asking Juan ‘what’s a faggot?’ and Juan’s answer certainly one that’d leave a mark in the young boy’s life. Juan is definitely not the typical drug dealer, or who we often think of someone in that profession. But then again, this film never resorts to oversimplification.

The transition between the three different periods in Chiron’s life is handled well, it never feels abrupt or jarring. As with many young boys in their teens, this time period is crucial in shaping their lives. The scrawny teen is still bullied at school, Chiron’s only friend is his Cuban-American friend Kevin (André Holland). I honestly have never seen Black sexuality/masculinity depicted in this way and it struck me just how beautiful and nuanced the story was. Forgoing explicit scenes, Jenkins’s way of depicting the sexually-charged scenes is far from gratuitous. In fact, it’s one of the most heart-wrenching scenes that really took my breath away. 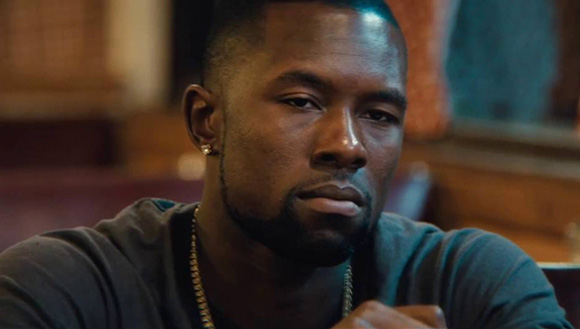 In his adult life, Chiron now goes by the name “Black,” a nickname given by Kevin as a teen. He’s now a tough, muscular young man who now treads the same life as his childhood hero Juan, right down to the kind of car he drives. There’s an emotional exchange between him and his mother, but nothing quite as the reunion between him and Kevin. I won’t spoil it for you but that ending really hits me hard emotionally.

On top of the three actors portraying Chiron, the supporting cast is solid. Harris deglamorized to play the role of Chiron’s junkie mother, amazing that she filmed her role in between her busy press tour schedule for Spectre, a film that couldn’t be more different from this one. I love Monáe as the sympathetic mother figure to Chiron, and Holland did an affecting turn as the adult Kevin. But I’m most impressed with Mahershala Ali, I hope to see more of him in prominent roles, he’s got the screen presence and confidence of Denzel Washington. Moonlight deservedly earned the Robert Altman Award at this year’s Independent Spirit Awards that honor the entire ensemble cast.

…
Few films hit me as hard as Moonlight did. I was so emotionally-invested in Chiron and I often have tears in my eyes when I think about his arduous life journey. The films also deftly broke stereotypes, challenging our perceptions of what we think of masculinity, especially amongst the Black community. I was also in awe by the poignant, elegant and graceful storytelling style of a subject matter rarely depicted on screen. It won’t be a hyperbole that Barry Jenkins has created a masterpiece in his sophomore effort. I’m impressed that It made me curious to check out his debut, Medicine for Melancholy. I will be really ticked off if this film or Barry Jenkins isn’t nominated for Oscar this year. I’m so glad to have seen this in the big screen. I have to mention the music by Nicholas Britell as well as cinematography by James Laxton, excellent on both fronts that adds much to this beautifully-crafted film. I rarely give a full score but this film absolutely deserves it.

Have you seen MOONLIGHT? I’d love to hear your thoughts on this film!