Rarely did I respond so strongly to a film’s tagline. In fact, I mostly barely notice them. Here’s to the fools who dream… well, La La Land‘s tagline speaks to me in a profound way, as essentially, I am one of those fools. Unabashedly.

Emma Stone plays Mia, an aspiring actress who works at Warner Brothers lot, serving lattes to movie stars with googly eyes. Any free time she gets she spends it on auditions. And like many other aspiring actresses like her, she gets constant rejections and is treated like dirt by casting directors. Meanwhile, there’s Ryan Gosling‘s Sebastian, a jazz musician who scrapes by playing gigs at dingy bars and Hollywood pool parties. Whilst Mia dreams of movie star greatness, Sebastian dreams of opening his own jazz club that celebrates the kind of jazz music he thinks is a dying music genre. These *fools* meet serendipitously, during a rousing opening number that harkens back to classic musicals where the actors burst into song and start singing and dancing in the midst of L.A.’s traffic jam.

With a title like La La Land, this musical dramedy is unabashedly dreamy and stylish. It’s hard not to smile during these energetic musical numbers, though I have to admit at times my mind did wander off and my heart craved for something meaty to hold on to. Well, Damien Chazelle did give us some moments with deep emotional resonance, but it’s not necessarily from the romance. Despite the dreamyness of the Mia/Sebastian love story, I think the musical numbers actually take place of the emotional weight. I just didn’t quite feel the oomph of their romance, that intense longing to be together a la Romeo & Juliet or Titanic’s Jack & Rose (hmmm, I just realized these two stars Leo DiCaprio, I guess the guy can really sell romance!) In any case, the moment that truly got me is the audition scene where Mia sang ‘fools who dream.’ I will definitely do a Music Break of this film, though the only song I remember most is this one. I was practically sobbing watching that scene, and Emma Stone deserves all the kudos for her performance just on this scene alone. Perhaps because she identified so well with Mia’s journey, having moved to L.A. at 15 to pursue acting, her emotion in the film feels authentic.

As for Gosling, I think many of my blog regulars know I’m not fond of the guy. This film doesn’t exactly change my mind about him. I do think he’s good, though not nearly as strong as Stone as his co-star. I just think Gosling’s face isn’t the least bit expressive and devoid of emotion, and so to this day I still don’t get what the fuss is about him. This is the third time Emma/Ryan are paired together as lovers, and I suppose they do have chemistry, though not quite the Bogey/Bacall variety.

The movie consists of pretty much the two of them from start to finish, J.K. Simmons and singer John Legend both had small roles that are basically cameos. The talented Rosemarie DeWitt is grossly underused as well as Sebastian’s sister. Some critics point out the lack of Black characters in the movie, which as a non-White person I think it’s not always fair to expect every race is represented in every film. 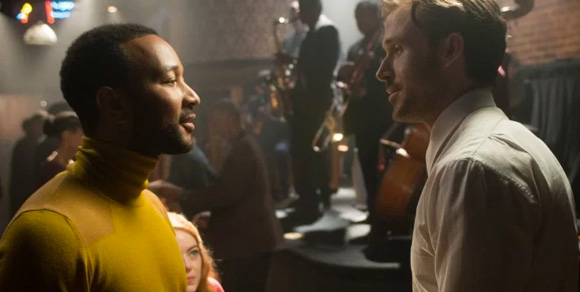 As for that ending…  SPOILER ALERT (highlight to read) It’s clever for Chazelle to have his cake and eat it too. The last 20 minute or so of the movie happens about 5 years after Mia and Sebastian parted ways. Essentially they achieved their dreams, at the cost of their romance. But it ends with a dreamy sequence of the two getting together and living happily ever after, which is what the audience would hope to happen. But for me, I’m glad they didn’t end up together, just like Roman Holiday, sometimes a bittersweet ending is one you remember most. 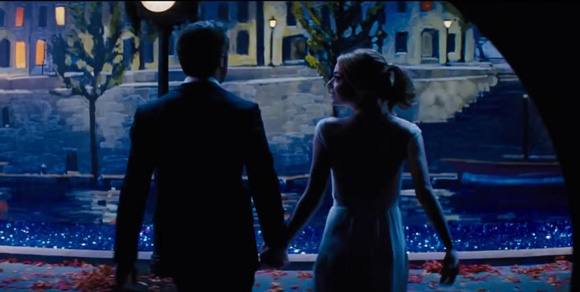 The critics went wild for this movie, and I agree with some who think this film is way overrated. I’ve had people ask me what I think of it, as I have the poster hanging outside my cubicle at work. I’d say it’s a frothy romance with a moving story about chasing your dreams. Emotionally speaking, it’s not exactly profound and it doesn’t quite reach the poignancy of Moonlight, but there are plenty of things Chazelle did here that deserve praise. It’s stylish and beautifully shot, with a dream-like quality to it that sweeps you off your feet.

The music by Justin Hurwitz is certainly one of the strongest aspects of the film, one I’d remember for years to come. Some sequences, especially that opening number, are truly lovely. I also love the creative use of props for locations such as Paris, which enhances the fantastical nature of the story. It’s also nice to see such a gorgeous film that is not just styled over substance.

Have you seen La La Land? What did you think?