A biographical film, or biopic (/ˈbaɪɵpɪk/; abbreviation for biographical motion picture), is a film that dramatizes the life of an actual person or people. 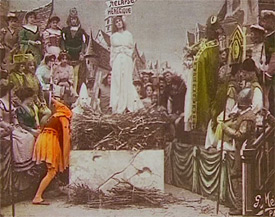 This week I saw two press screenings (The Butler and Jobs) that are both based on real-life characters. So I thought I’d blog about one of Hollywood’s favorite genre [or is it sub-genre?]. There are a plethora of biopics getting made every single year. I mean, if you look at this list of biopics in Wikipedia, the number is in the thousands, dating all the way to the year 1900 with short, silent film Jeanne d’Arc by Georges Méliès — clearly Joan of Arc is a popular subject that’s been filmed time and time again. Just in 2000s alone, there are nearly 500 biopics in just one decade! I think biopics have become a favorite for actors to portray, perhaps because they tend to be popular come award season. A bunch of actors have won Oscars portraying real-life characters, as Daniel Day Lewis did most recently playing President Lincoln.

Obviously, just like any genre/sub-genre, there are good and bad biopics, and there’ll never be a shortage of them in the years to come. I for one don’t mind them, especially when the subject matter are intriguing and even inspiring. I prefer biopics that focus on a certain period of the person’s life instead of an overarching biography, just because it’s so challenging to do the latter and make it compelling. I’m excluding documentaries for this post, as it’s kind of a whole different genre entirely.

If I were to choose my top 10 favorites from what I’ve seen, it’d probably look something like this (in no particular order):

Cate Blanchett as Queen Elizabeth I

I say ‘favorite’ because a large part of how well we receive a biopic is how much we care about the subject matter. I mean, I’m fascinated by royal families (esp. British), but I know some people don’t and they probably aren’t going to be keen on films about them. Of course another big thing is how well we think the actors portray the real-life persona on screen, physical resemblance notwithstanding. Keep in mind I haven’t seen some of the essentials like Gandhi, Citizen Kane, The Passion of Joan of Arc, Ragging Bull, etc.

So my question to you two-fold… do you like Biopics and which ones are your favorite?

89 thoughts on “Question of the Week: What’s your favorite biopic(s)?”