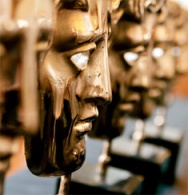 Hello everyone! Happy post-BAFTA Monday, fellow film fans. I’ve only followed it somewhat via Twitter, seeing people’s reactions on the winners. What’s with the hate against ARGO, I think it deserved the Best Film and Best Director win for Ben Affleck. In fact, it’s perhaps one of my favorite Best Picture contenders, but I remember people were grumbling too when The King’s Speech won. Ah well, I don’t always agree with the winners so it’s nice to be on the other side of that spectrum.

Well, we’ve got sleet/freezing rain/snow mix all day Sunday so I never left the house, which rarely happens. To all my friends in the Northeast affected by the monster storm Nemo, I pray that you’re all ok. I’m not gonna complain that we barely half a foot of snow!

I skipped the cinema again as nothing interest me. I had seen Side Effects a couple of weeks ago so check out my review if you haven’t already. Oh apparently Top Gun IMAX 3D re-release still spells ‘ka-ching’ for Paramount as it raked in $1.9 mil this weekend playing in 300 theaters. I wouldn’t mind rewatching that again on Blu-ray, I’ll see if my pal Ted has the BD 😉

So my weekend viewings consist of a brand new made-for-Netflix show House of Cards, a masterpiece classic All About Eve, and Bel Ami, which was so inferior compared to the other two. I don’t even feel like reviewing that last one. Right after I finished it, I couldn’t help but watch the last episode of North & South just to see this scene. Richard Armitage as John Thornton never fails to beguile me and erase my memory of Robert Pattinson as a cunning Frenchman.
…

I’ve only seen two episodes in and both are directed by David Fincher so naturally I expect something great. Well, thankfully it didn’t disappoint. Fincher’s directing style with his signature camera work and framing technique works well for this story. It made me wish he had directed the entire episodes though I reserve judgment until I see the entire first season. Kevin Spacey is perfectly cast Frank Underwood, a ruthless and ambitious politician (is there any other kind?) willing to use and betray anyone to get what he wants in Washington. I’m usually not into political shows, but this one is quite entertaining. Spacey’s got this inherent playfulness in portraying a despicable character, you’re repulsed and captivated by him at the same time.

I just read this interview on Hitfix with Fincher on how the show came about, which was inspired by an early 90s UK TV series of the same name. It’s fascinating to see the casting process as well…

“…One of the responsibilities I put on the cast when we had our first read through is I said, “I want everybody here to know that you represent our first choice – each actor here represents our first choice for these characters. So do not f*** this up.”

The ‘breaking the fourth wall’ style where the character speaks directly at the audience is tricky, but I think it works well here, or at least the filmmaker and actor makes it work. Only Spacey’s character uses this technique though, it gives the feeling that we’re in on it on all of Frank’s schemes. I’m also impressed with the rest of the key players on the show: Robin Wright as Spacey’s equally sly wife, Kate Mara as the ambitious young reporter, and Corey Stoll as a Pennsylvania congressman consumed by his own demons of sex and drug addiction.
I hope the rest of the episodes are as intriguing as the first two, but my hubby and I are definitely hooked for more.
/// 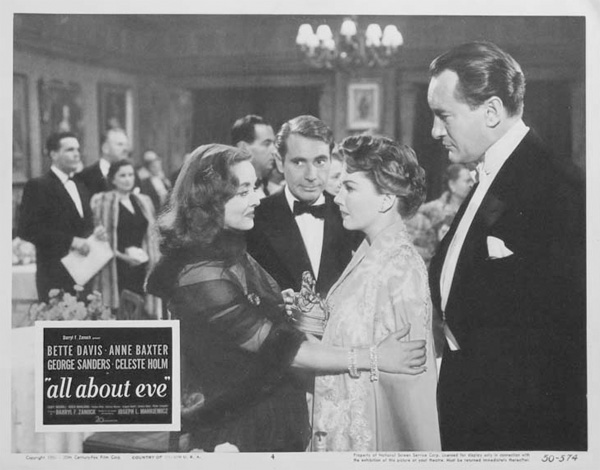 I’m sooo glad I finally saw this film, special thanks to my friend Vince for his help to get this movie! I initially wanted to see this as I’m participating in Paula and Aurora‘s 31 Days of Oscar Blogathon and I’m going to be featuring the famed costume designer Edith Head. So naturally I want to see some of her Oscar-winning work, and I’ve been wanting to see this one for ages. I also promised Andrew when he made this excellent Scene on a Sunday post on All About Eve over a year ago. It’s a bit late, sorry Andrew, but hey I did get to see it on a Sunday 🙂

This film was nominated for 14 Academy Awards and won six, including Best Picture. As of today, it remains as the only film in Oscar history to receive four female acting nominations (Bette Davis and Ann Baxter as Best Actress, Celeste Holm and Thelma Ritter as Best Supporting Actress). It’s worth noting that out of the four actresses, I’ve only seen Baxter and Holmes in a previous film, thanks to my Gregory Peck marathon. Same with the two male actors Gary Merill and Hugh Marlowe who were excellent in Twelve O’Clock High. George Sanders was excellent as well as the mischievous theater critic.

Andrew said it best on Twitter last night… “… imagine it’s more than half a century old. It’s so (sometimes startlingly) relevant and fresh.” Indeed it was! In fact I was thinking that there are some similarities between House of Cards‘ Frank and Eve Harrington, different end goal but they both used the same conniving, manipulative means to get what they want. 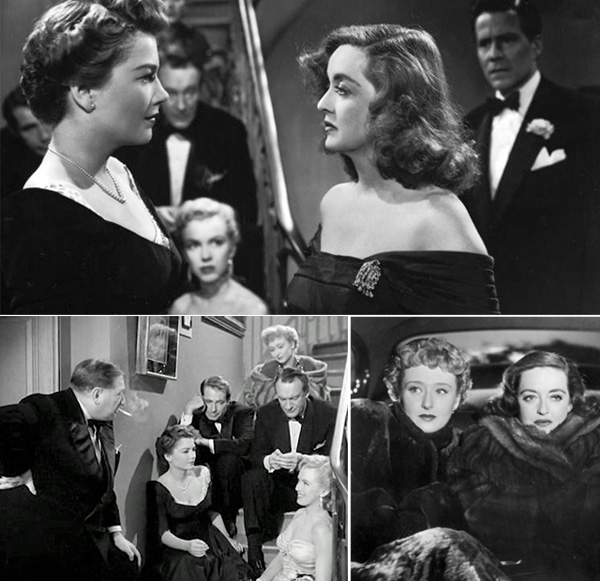 Andrew also asked me which one is my favorite performance. Oh boy, between Davis, Baxter and Holmes, it’s really hard to say. Having seen Bette Davis’ performance for the first time, I was quite mesmerized by her. Baxter perhaps has the hardest role to convincingly portray an innocent small town ingenue to a devious, scheming b*tch climbing her way to the top. At times her delivery is a bit too over the top When she was wearing a black wig in her dressing room following a performance, I was reminded of her seductive pur in The Ten Commandments as she was trying to seduce Moses, ahah. I guess I like Holmes’ character the most because she’s kindhearted and sees the good in people. She’s a fantastic actress and her scene with Baxter in the powder room is especially memorable. Oh, there was also a brief but interesting cameo of a then unknown starlet by the name of Marilyn Monroe as an aspiring actres, but it was kind of a thankless role for her.

There are much to admire about this film… starting with the bewitching story, brought to life by all the talents involved. What this film also has in abundance is style. Visually, its set direction, cinematography, and of course costume design are superb. The brilliant script also makes this film surprisingly funny. Davis’ Margo Channing not only dresses well, but she seems to have an endless supply of great lines as well. She seems to have the best lines when she’s vexed… “I’ll admit I may have seen better days, but I’m still not to be had for the price of a cocktail like a salted peanut.” And of course her most famous line “Fasten your seat belts, it’s going to be a bumpy night” is delivered with such a perfect sense of irony.

I feel like I can’t do it justice reviewing this film in my weekend roundup post, so let me just say that the iconic status is absolutely well-deserved. Joseph Leo Mankiewicz‘s film lives up to my already high expectations and captivated me from start to finish. Like Casablanca, I’m glad I finally saw one of Hollywood’s finest, and certainly it wouldn’t be the last.

Well, that’s my Wintry weekend roundup. How ’bout you folks… seen anything good?

41 thoughts on “[Wintry] Weekend Roundup: House of Cards and All About Eve”