This supposedly Steven Soderbergh‘s last feature film wasn’t even on my radar, in fact I just saw the trailer the day of the screening a couple of weeks ago. I’m glad I didn’t know anything about this movie and I think the less you read or watch about it the better. In fact, when I went to the screening, the press associate said the studio won’t allow anyone to be admitted to the theater once the film has begun, saying that the opening scene is so key to the plot that showing up late would surely lessen the viewing experience for the viewer.

The opening scene takes place in what looks to be a luxury apartment in Manhattan, belonging to a well-to-do couple Emily (Rooney Mara) and Martin (Channing Tatum). Emily’s husband has just gotten out of jail where he spent a four-year term for insider trading. She should be overjoyed, right? But instead she’s afflicted with recurring bout of depression and suicidal behavior. The doctor who ends up treating her, Dr. Jonathan Banks (Jude Law), proceeds to prescribe her an anti-depressant. But when a regular drug isn’t enough, he gives her a new one that just came out in the market called Ablixa, suggested by Emily’s former shrink, Dr. Victoria Siebert (Catherine Zeta-Jones). The drug perks Emily up for a while — much to the delight of her husband – but then the drug’s supposed side effect ends up creating more problems than its worth.

At least that’s what Soderbergh wants you to think. When people first saw the trailer or even reading the premise involving a pharmaceutical corporation, they might immediately think of Contagion (which was also written by Scott Z. Burns). Other than the medical-related theme, it can’t be more dissimilar. Soderbergh is known for experimenting on his projects and this one is no different.

As the story progresses, we realize more and more that everyone and everything are not who/what they seem. The character focus alternates between Emily and Dr. Banks, who apparently has some issues on his own and a past incident that catches up with him. The narrative pretty much shifts from being a character study to a whodunnit Hitchcockian thriller laden with plot twists. I find the first act to be much more intriguing, but its um, potency kind of wears off in the second act, recovered slightly in the third though the lurid twist is a bit eye-roll inducing. 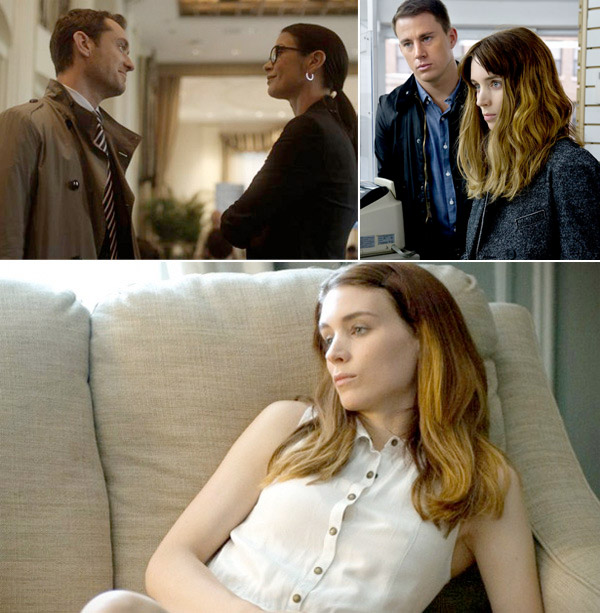 I think Side Effects is a deftly-constructed thriller, it’s packed with clever camera work, shrewd acting and appropriately moody atmosphere (thanks largely to Thomas Newman‘s ominous score). Yet somehow the film fails to engage me. Not to mention the lack of emotional connection with any of the characters, made worse by the decidedly morose and unsettling tone of the entire film. A few commenters in the Five for the Fifth post pointed out how some Soderbergh’s films are emotionally-cold, and this one is a perfect example. There is not a single character that I can truly empathize with, maybe Banks’ wife (played by the underrated Vinessa Shaw), who has to put up with her husband’s antics. By the end I feel that they get what they deserve, if only they happen much sooner.

We’ve got another killer heroine from Soderbergh. Instead of the bad-ass action hero in Haywire, this time we’ve got a slightly more rounded character — and more unhinged – but still equally detached. Performance-wise, I think Mara was given the most material to work with and she’s able to tackle the contrasting personalities her character requires. I’ve only seen her in The Social Network, which was brief but memorable. She’s definitely a gifted performer and her glacial aura is put to good use here. Her blank expression suggest there’s something lurking, enhancing the chilling effect. At the same time, her lack of warmth makes it impossible to root for her. Jude Law is pretty good here as he’s the co-lead of the film, a much more sympathetic character despite his flaws. I must say that Law doesn’t have quite have that star quality so when the narrative is focused on him, he doesn’t exactly lights up the screen. All I could say for Zeta-Jones is that perhaps she’s inspired by her husband’s choice of role in his next film when she signed up for this role.

Despite the roller-coaster ride that Soderbergh set up for the viewers, this film left me rather underwhelmed. I glanced at my watch a few times as I was watching it, which is never a good sign. I didn’t see some of the twists coming but yet when it happened, I wasn’t all that surprised either. The revelation itself seemed a little too neat that it doesn’t quite pack a punch. Don’t get me wrong, I think it’s a decent thriller, but it doesn’t leave a level of greatness I expect from Burns and Soderbergh pairing.

Judging from the reaction about his pending retirement, I know a lot of people are disappointed by that and wish the director would stay around. Well pardon me for being indifferent.

As Tyson has eloquently put in his A Call To Arms post, would you be so kind as to use one of the share buttons below to share my post? I’d sincerely appreciate it. Share… it’s what makes the blogs go around 😀

Have you seen this film? Let me know your thoughts in the comments.