The discovery of a dead English monarch’s bones found in a parking lot in Leicester, England has been dominating the news lately. Just this past Monday, scientists indeed confirmed that the remains indeed belong to Richard III, the last English king to die in battle. It’s quite a fascinating story that started back in 2009 when a member of the Richard III Society, Philipa Langley, felt chill on a hot Summer day when she walked on that car park, which then led to the excavation last Fall. University of Leicester has been studying the remains for months since, including creating a 3-D reconstruction of the late king’s head and shoulders, combining computer analysis of his skull and interpretations from historical portraits (per National Geographics)

I’ve been sort of fascinated by British monarchy, but for some reason I have not seen any film adaptations of Richard III. There are a bazillion of them apparently. The Guardian compiled a bunch of the video clips earlier this week, featuring an array of period dramas and modern interpretation of Richard’s life. Most of the artistic adaptations are likely influenced by Shakespeare who painted Richard III as a spiteful hunchback whose unbridled ambition to become king drove him to murder his princely nephews. That was what I learned when I was at the Tower of London, though there was never a clear evidence what really happened to those boys.

This is all old news to RA’s fans, but I thought I’d share this to you readers in case you haven’t heard about it. Langley, who’s also a screenwriter, wants to change Richard’s image by bringing the ‘true’ story of Richard III to light. Apparently she already had a script treatment done and has asked one of my favorite Brits to star! (you can listen to her interview on Radio Leicester here)

You know I’m very keen on Richard Armitage and has been hoping for a breakout role for him! I dedicated a post when he was cast as Thorin in The Hobbit and would love to see him as the next James Bond. But I think this role is even more tailor-made for him. Especially since he’s named after the King himself and was born on the day he died in, guess what, Leicester!!

Who knows he might be a descendant of the King himself, it wouldn’t be too far fetched, no? In a way he resembles the King a bit, though 100 times better looking!! Just take a look at the 3D reconstruction photo below: 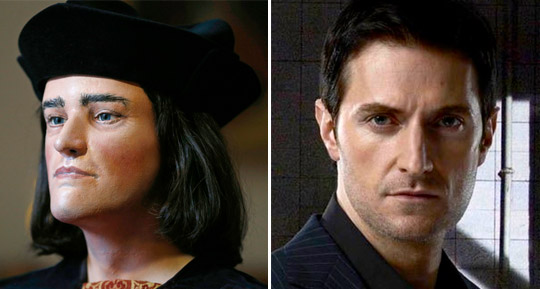 It’s funny that in the Radio Leicester interview, Langley brought up people’s protests that the 6’2″ actor is too tall to play the 5’8″ monarch, but she pointed out that Richard has just played a dwarf in The Hobbit, ahah! Even though the velvety-voiced is now 41 years old and the King died in his early 30s, I think he’s still perfect for the part. Heck it’s less than 10 years, make up can do wonders even for actors playing characters twice their age!

Richard has said in many interviews about his ‘connection’ to the late King and his desire to bring the Richard III movie to light. Check out this excerpt from Vulpeslibris blog:

VL: Now, you were born on August the 22nd and your given name is Richard. I believe those two facts are not completely disconnected – and that there are plans afoot for a bit of Richard III rehabilitation. Can you tell us a little more about it?

RA: I was named Richard being born on the anniversary of Richard III’s demise at Bosworth; one of my father’s favourite novels is The Sunne in Splendour by Sharon Kay Penman, and I read this many years ago. In recent years it has lead to a tentative interest and line of research into the rehabilitation of this story. As an actor, it’s a project I would love to achieve. I believe it is a great story, a socio-political thriller, a love story and a dynastic tragedy. My challenge is to convince commercial producers to see beyond ‘history lesson’, but I strongly suspect that this will be a long way off, probably outside of my ability to play the role, but I wouldn’t rule out playing another role, I may even be producing by the time someone wakes up and realizes the potential for this project.

It turns out this film has been his passion project for some time. Here he talks about his affinity to Richard III and his desire to do a cinematic project of the character in this Anglophile Channel:

…
Richard’s certainly got that brooding intensity down pat and he’s got that valiant & regal aura about him too. Given the battle scars discovered on the King’s skeletons, we can expect some pretty intense battle sequences in the film? I certainly hope this project will come to fruition… and soon, whilst the public has a great interest in the story. Even Langley herself realize, it’s now or never. She said in the radio interview that Richard Armitage is currently pitching the project to the producers in L.A. and a major distributor has expressed interest. I know this project will happen, but I sure hope they don’t just take the idea and cast some nondescript Hollywood movie star in the lead!

What do you think of this project folks? Thoughts on Richard Armitage in the role?
…

32 thoughts on “Now THIS is a CASTING NEWS I can get behind! Richard Armitage as Richard III”