Hello folks, welcome to the first 2013 edition of Five for the Fifth!!

As is customary for this monthly feature, I get to post five random news item/observation/poster, etc. and then turn it over to you to share your take on that given topic. You can see the previous five-for-the-fifth posts here.

1. Well, since it’s only five days into the new year, some people are perhaps just starting their New Year’s Resolutions or perhaps already forgotten all about it, ahah. I actually haven’t really thought about it, though in terms of blogging and movies, I do want to watch more classic movies this year, which I did right away with The Shop Around the Corner on January 1st. It was pretty sweet, I love James Stewart, I need to do a JS marathon 😀

Anyway, I’m curious if you’ve got any New Year’s resolution. Name one (or more if you choose) movie/blogging resolution for the year.

2. Can you believe it that only 5 days away until The Academy Awards nominations! On Thursday, January 10, the nominations will be announced at 5:30 a.m. PT at the Samuel Goldwyn Theater. I’ll have a reaction post after that but for now, but I feel like I’m not ready to do my 2013 predictions, though last year I was pretty good in my predictions.

Anyway, last year there was only 9 nominees, so who knows how many it’ll be this year. Well, just for the fun of it, I’ll take a stab at my predictions for the 10 Best Picture nominees:

Sounds like it’s a really competitive race this year, I’m really curious which one would sweep the Oscars this year with at least five nominations or more.

So what’s YOUR Best Picture predictions, folks? Any hunch which one would take home the most Oscars?

3. Well, you’ve probably read my goodbye letter to Gerry Butler this past week after seeing the train wreck that is Playing For Keeps. It’s too bad really, but until I see him in much better materials, I can’t simply call myself a GB fan anymore. 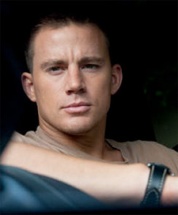 It’s been quite an interesting year as I actually start to like an actor I previously don’t care for. Now, I’m not exactly a fan of his yet, but at least I’m not going to brush him off so quickly as I did before. I’m referring to Channing Tatum. I first saw him in Haywire and I thought he was just ok, but his performance in Magic Mike was actually pretty good and he was hilarious in 21 Jump Street. So in fairness, I guess I’m starting to see what all the fuss is about him. But no, I’m not about to rent G.I. Joe or [gasp] Dear John.

Btw, the irony is not lost on me that GB and Channing will go mano-a-mano later this year (well not literally) with their White House action flicks. As Terrence has predicted, chances are both are going to be disappointing, ahah.

Anyway, which actor disappointed you this year and/or on the flip side, did you have a change of heart about someone you previously dislike?
…

4. Switching gears a bit to casting news. For quite a while now, I’ve been reading endless casting reports for yet another Marvel superhero ‘team’ movies in the works, a comic book I’m not familiar about called Guardians of the Galaxy. Just who the heck is that all about?

Even the 31st Century needs heroes, and the call has been answered by the Guardians of the Galaxy, a team of superhuman and extraterrestrial adventurers dedicated to the safeguarding of the Milky Way Galaxy from any force that threatens the security or liberty of its various people. (per Marvel.com)

Apparently James Gunn is going to direct, yet another name I’m not familiar about. But some of the actors who’ve reportedly been tested for the various roles did pique my interest. Here are just some of the names that have been linked to the project:

Now, I’m not exactly interested in this movie yet, but if Lee Pace ends up being cast, now that’s a different story 😀

What do you think of this project? Any particular actor you’d like to see getting cast here?

…
5. Lastly, since I haven’t posted a Music Break in a while, I’ve got include a movie music in here somewhere. I don’t know if I’ll be posting my list of favorite soundtracks of 2012, but if I did, The Hobbit would surely make the list. I mean, some soundtracks you listen to later on and appreciate. But this music was an absolutely integral reason why I enjoyed the journey so much. Howard Shore did such an amazing job creating a new theme for The Hobbit, whilst incorporating some parts of The Lord of the Rings theme I’ve come to know and love. From the time Thorin (Richard Armitage) led his band of dwarves sang The Misty Mountains in what sounds like a solemn hymn, that beautiful theme continue to mesmerize and move me throughout the film.

The theme itself wasn’t written by Shore however, but by David Donaldson, David Long, Steve Roche and Janet Roddick, who apparently have worked together as composers/songwriters Wellington New Zealand (Thanks MovieMusicUK). Take a listen below:
…

So my last question to you is, what’s the most memorable movie music you’ve listened to this year? 😀

That’s it for the first 2013 edition of Five for the Fifth, folks. Now, please pick a question out of the five above or better yet, do ‘em all! 😀